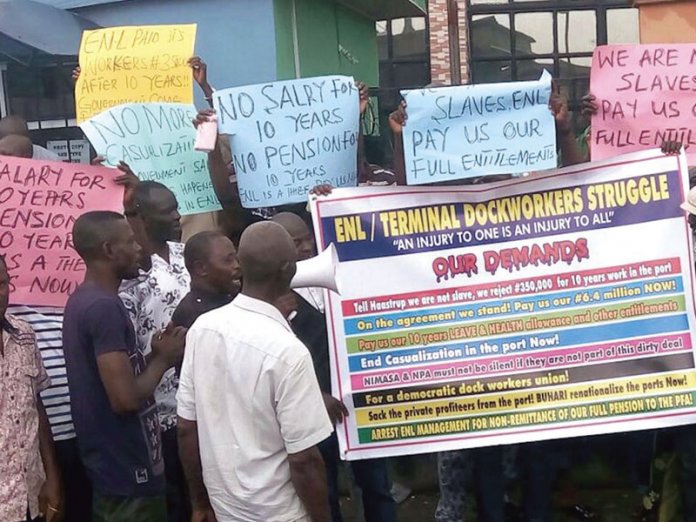 The Collective Bargaining Agreement signed by the Nigerian Maritime Administration and Safety Agency NIMASA alongside other associations in the maritime sector will improve the welfare of dock workers in line with global best practices, writes Eromosele Abiodun

Shipping is an industry that contributes over 90 per cent to the world economy. There are about 51,400 merchant ships plying all over the world, transferring goods between places, keeping the economy running. Whether it is oil from the Gulf or iPhones in containers being delivered from one part of the world to another – everything is running round the clock, with precision and diligence.

It is a known fact that more than 90 per cent of the world trade is carried by ships and these ships are manned and operated by seafarers. At the tail end of it are the dockworkers that offload the ships. Hence, it can be safely said that 90 per cent of mankind’s needs are being served by directly or indirectly by seafarers.

However, as critical as dock workers and seafarers are to the nation, they are often treated shabbily by ship owners and terminal operators. This has resulted in industrial action leading to shutdown of activity at the ports.

For instance, maritime workers early last year grounded port operations across the country as they staged protests against the repeal of the Nigerian Ports Authority(NPA) Act.

The industrial action by the Maritime Workers Union of Nigeria (MWUN) and Senior Staff Association of Communication, Transportation and Corporation, which lasted for six and half hours, saw the terminal operators, seafarers, dockworkers and thousands of indirect workers at the Apapa, Tin Can, Onne and other port formations downing their tools.

President of NWUN Adewale Adeyanju had alleged that the presentation of a new bill to repeal the NPA Act, 2004 was not done in good fate as none of the stakeholders in the sectors, especially the two unions, were invited to make input before passing the bill in the Senate.

According to him, the new bill sponsored in the House of Representatives by Nicholas Ossai, which aims to establish the Nigerian Ports and Harbour Authority, is a threat to the survival of the ports and job security of workers.

He recalled that the concession of the seaports in 2006 had led to the loss of 12,000 jobs when the operations of the NPA were ceded to private terminal operators.

“We cannot pinpoint any major deficiency in the present NPA Act that warranted this bill except that the promoters of the bill want to corner for themselves harbour operations, which are the major foreign exchange earner for the NPA and by extension the Federal Government, without thinking about the security implications to the nation and the negative effect on the workforce as it was previously done during the concession exercise, “Adeyanju said.

While addressing journalists at the Apapa Port, the President, Senior Staff Association of Transportation and Corporation (SSATAC), Benson Adegbeyeni, said:“The message has been passed to the whole world. We are just telling them that this is wrong. The action that will follow this protest will be discussed at a roundtable. We are expecting a response from the government. We are not against privatisation but we want them to carry stakeholders along.”

That was not all, early 2016, dockworkers at ENL Consortium, operator of Terminals C and D of the Lagos Port Complex (LPC), Apapa embarked on a strike to protest ill treatment by the management of the company. While the company argued that it was ready to pay off dockworkers who have elected to quit their jobs, the dockworkers insisted it was not so.

Legal Adviser of ENL Consortium, Uzamot Boye had said that contrary to claims in certain quarters, workers were issued with valid employment letters when they joined the company.

He said: “It must be on record that these set of dockworkers elected to leave the terminals by themselves. Those of them who want to continue working with us, and who are in the majority, are at their job posts as we speak but the few that want to leave are free to do so. We have been meeting with the union and officials of the Nigerian Maritime Administration and Safety Agency (NIMASA) to work out modalities for their payments, which we are ready to pay in full in consonance with the NJIC agreement.”

NIMASA Signs CBA
However, in a bid to ensure a better living standard for dock workers in the Nigeria maritime industry, the alongside other associations in the sector under the aegis of the National Joint Industrial Council (NJIC) towards the end of last year, signed a Collective Bargaining Agreement (CBA), which is intended to improve the welfare of dock workers in line with global best practices.

The agreement, which was documented involves increases in their wages and allowances and certain emoluments and benefits, which include: payment of redundancy and retirement benefits by terminal operators to aged dockworkers, payment of specified allowances to a deceased dock worker’s next of kin and pension contribution scheme for dock workers amongst other items listed in the agreement.

Speaking during the signing ceremony of CBA in Lagos, the Chairman of the NJIC, Mr. Gambo Ahmed, who is also the Executive Director, Maritime Labour and Cabotage Services of NIMASA and equally represented the Director General, Dr. Dakuku Peterside, at the occasion, noted that dock labour is an integral part of the maritime industry, hence the need to place priority on their welfare.

He urged operators to bear in mind that the welfare of the dock workers will impact a lot on ports operations and in turn the entire economy, hence the need to ensure that they are properly catered for.
“When the welfare of the dockworkers’ are put into proper perspective, we will have a healthy maritime sector, thereby leading to the actualization of a robust economy,” he stated.

The Chairman of the Seaports Terminal Operators Association of Nigeria (STOAN) Dr. (Mrs.) Vicky Haastrup stated that without the dock workers, there will be no ports, because the workers play a major role in economy of the ports, hence their welfare is paramount.

While commending NIMASA for its efforts in coordinating the NJIC, she observed that the initiative has brought about understanding among stakeholders in the ports and also given room for the peace and orderliness the maritime sector is enjoying.

“We must all work together to ensure that the interest of the common dock worker is protected,” she said.
On his part, the President of MWUN, Adeyanju applauded the initiative and pleaded that all parties involved should endeavour to fulfill their obligations as contained in the agreement.

Accordingly, he stated that it has never been this good in the industry, but for the supervision of NIMASA through the NJIC initiative, the industry is witnessing a new dawn with this CBA that is being signed. He also used the opportunity to pledge that the leaders of the Union will continue to ensure the sustenance of peace and harmony in the maritime sector in the interest of the sector and the Nigeria economy as a whole.

On his part, the Chairman, Ports Consultative Council, Otunba Kunle Folarin and the President of the National Association of Stevedoring Companies, Mr. Bolaji Sunmola also joined in commending the efforts to maintain peace at the ports and called for continuous engagement, as it remains a panacea to a robust maritime sector.
Director, Maritime Labour Services of NIMASA, Mr. Ibrahim Jibril noted that NIMASA believes that all parties will ensure full implementation of the agreement and that this will help the Ease of Doing Business initiative of the Federal Government as well as improved turnaround time in all activities in the ports.

The agency is statutorily empowered under section 27(1) (b) of NIMASA Act 2007 to facilitate the NJIC meetings and circulate signed Agreements to all concerned parties. Further to this, the Agency is also to ensure strict compliance on implementation of the CBA.

Improved Welfare
Before the CBA was signed, NIMASA had early 2017 restated its commitment to the welfare of dock workers in the industry. Ahmed had during a meeting with employers and labour unions in Lagos noted that the initiative was with a view to use the tool of constant engagement to ensure that the dock workers’ get better living conditions in line with International Labour laws.

Gambo urged the operators to bear in mind that the welfare of the dock workers will impact a lot on the ports industry and also in turn the entire economy, hence the need to ensure that they are properly catered for.
“When the welfare of the dockworkers’ are put into proper perspective, we have a healthy maritime sector, thereby leading to the actualisation of a robust economy”, the chairman stated.

On his part, Jibril said that the new agreement will demonstrate the agency’s commitment, which is in line with the theme of the 107th International Conference held in Geneva viz: “A future with Decent Work and also building a future for the Dock Labour Industry”.

He also assured them that the agency has also put in place all necessary machineries towards ensuring a successful exercise in line with the provisions of the existing agreement and the demand for its review.

MWUN Appreciates STOAN
Following improved welfare for dock workers, Adeyanju had said private terminal operators under the aegis of STOAN have substantially increased the wages earned by dockworkers from an average of N10,000 before the 2006 port concession to about N150,000.

Adeyanju said dockworkers now enjoy much better working condition compared to what was obtained in the pre-concession era.

“Before concession, they were just using us as slaves in our fatherland. Nobody can talk about what his take home pay was. Sometimes, some people get between N10, 000 and N20, 000 per month but today, it has improved tremendously to between N100, 000 and N150, 000. It has increased tremendously,” he said.

Adeyanju, who lauded terminal operators for increasing the wages of dockworkers in spite of the low volume of import in the country, appealed to the Federal Government to urgently fix the dilapidated port access roads, which he said is adversely affecting port operation and the nation’s economy.

He said: “The roads to the seaports have contributed to most of these problems and it has had adverse effect on our members. Because of the bad roads, some of the vessels that are supposed to come to the port are sometimes diverted to neighbouring countries.