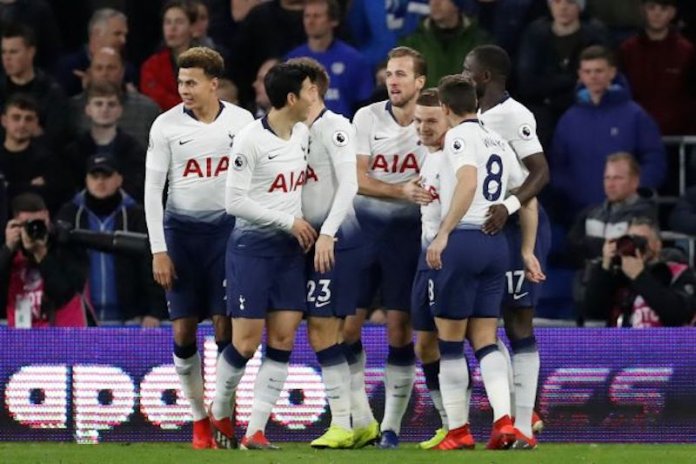 Tottenham strolled to a comprehensive 3-0 win at Cardiff City yesterday to climb back up to second place in the Premier League table.

Spurs ruthlessly exposed the hosts’ flimsy defending to race into a 2-0 lead after just 12 minutes – Harry Kane bundling in a fortuitous early opener and Christian Eriksen nestling a fine strike into the bottom corner.

Son Heung-min added a third before the break and, from that point, the untroubled visitors seemed to ease off a little.

Cardiff at least registered their first efforts on target in a low-key second half but the damage had already been done and they remain 16th in the table, three points clear of the relegation zone.

By contrast, a sixth victory from seven league matches closes the gap between Spurs and leaders Liverpool to six points, with the Reds away at third-placed Manchester City on Thursday.

And although the home side was barely in this contest, such a handsome margin of victory and convincing performance was timely for Tottenham, who had suffered a shock defeat at home to Wolves in their previous outing.

Successive thrashings of Everton and Bournemouth had added weight to the notion Spurs are genuine contenders to win the Premier League, even if Mauricio Pochettino had described his side as “intruders” in the title race.

Their growing sense of optimism was punctured by that loss to Wolves – but this display suggested it was a mere aberration.

Whereas Wolves were disciplined and resolute, on this occasion Spurs were presented with a charitable Cardiff defence – which they punished clinically.

The opening goal arrived inside three minutes and in farcical fashion, Kane playing the ball wide to Kieran Trippier, whose cross fell to Sean Morrison but the Cardiff defender only succeeded in playing the ball on to Kane’s knee before it bobbled into the net.

It may have been a lucky strike for the England captain but it was also a significant one, as it meant he has now scored against all 28 of the Premier League teams he has faced.

Tottenham had countered swiftly and accurately to set up that opportunity, and it was a similar tale for their second goal as Son teed up Eriksen, who deftly shimmied into a shooting position before arrowing a low effort into the bottom corner.

Son, who has been in sparkling form of late, then got in on the act as he received a pass from Kane and finished neatly from a tight angle.

At this point, Spurs looked set to hand Cardiff a hammering heavier than either of the two they had dished out to Everton and Bournemouth, but instead Pochettino’s men showed a little mercy.

After a congested festive period of fixtures, it may have been an effort to conserve their energy, perhaps a wise approach with far tougher challenges to come.