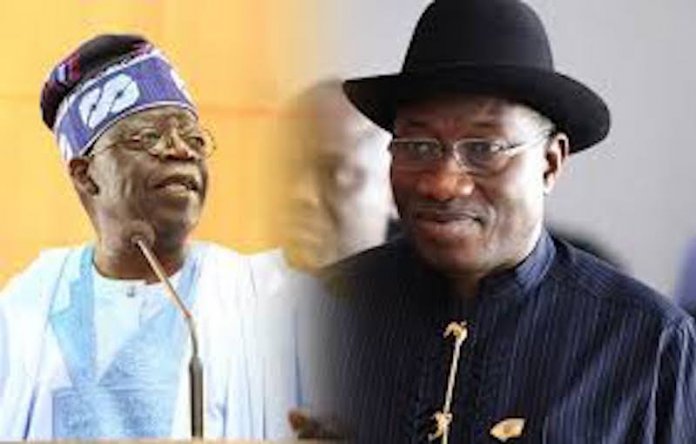 Former President Goodluck Jonathan and the All Progressives Congress (APC), National Leader, Senator Bola Tinubu, have urged Nigerians to be confident and steadfast in the hope for a better future for Nigeria.

Jonathan stated this in his New Year message to Nigerians in which he affirmed that 2019 offers the citizens a new opportunity to aspire for the realisation of the dream of a prosperous country.

Below is the full text of the message which he shared on both his Twitter and Facebook accounts:

“I do not intend to give a long message this New Year. All I just want to say is that there is hope and a future for Nigeria. We do not just have a New Year, we have a new opportunity. A new opportunity to be better leaders and better followers. To be better citizens who join hands with our fellow Nigerians, irrespective of region and religion, to bring Nigeria ever closer to the dreams of our Founding Fathers.

“The year 2019 brings with it its own challenges, but if one sentence should summarise our collective national attitude to those challenges, that sentence is this-Nigeria will survive and thrive, by God’s grace and our collective fidelity to the Nigerian Dream.

“On behalf of my family and the Goodluck Jonathan Foundation, I wish you and your family a Happy New Year. 2019 is the year of better things for Nigeria.”

On his part, Tinubu advised Nigerians to “select the path of forward progress” during the 2019 elections.

The former Lagos governor urged Nigerians to perform their civic duties by voting with the best interest of the country at heart.He said: “We have a choice to make. The choice we make will demonstrate the type of nation we want. I select the path of forward progress for I have never recommended to myself or to the nation the awkward practice of walking backward.

“We must exercise courage and vision. We must continue forward for the sake of this nation and our posterity, we dare not retreat or regress.

“Elections will be free and fair. You must add your voice and vote. You must participate in this important exercise of our democratic rights and institutions. We seek to build a better nation. We ask you to join us.

“The nation is on the verge of an election to determine our collective fate, we can either chose to continue forward or return to the old ways that held us back for so long.

“Just as 2018 must turn into 2019, we must also continue to move forward. As time cannot proceed backward. Nor should we.”

Tinubu said the President Muhammadu Buhari led-administration had made progress in moving the country forward.

Cross River State Governor, Professor Ben Ayade, has urged Cross Riverians to be hopeful of a better 2019 as the foundation his administration has laid in the last three years is progressively being crystalised through the rapid industrialisation of the state.

In his New Year message signed by his Senior Special Assistant on Media and Chief Press Secretary, Mr. Christian Ita, Ayade said the herald of a New Year, which comes with new vistas, new aspirations and a revitalized hope, offers Cross Riverians the chance to look forward to a better Cross River in 2019.

“Seeing out a year gone by and ushering in a new one is always a moving experience. If we take stock of the year gone by, we have every reason to be happy as our expectations are being fulfilled and our efforts at building a virile, stable and sustainable Cross River is crystallising,” Ayade said.

We Will Restore Ekiti to Right Path in 2019, Says Fayemi

Ekiti State Governor, Dr Kayode Fayemi, has said that his administration will in year 2019 make concerted efforts to “right most of the wrongs” of the past by restoring the State to its pride of place.

He also urged Nigerians to shun politics of bitterness as the country prepares for the general elections.

Specifically, the governor said in his new year broadcast yesterday that the state would be re-positioned among the comity of states as a destination of choice for investment, with government focusing on infrastructure and agricultural development as well as knowledge economy among others.

The new year broadcast was also aired on the state broadcasting service that resumed operations yesterday, having just been re-opened by the National Broadcasting Commission (NBC).

Fayemi disclosed that many of the corporate organisations and donor agencies that had fled the State as a result of “suffocating business environment” are now returning to the state, adding that 2019 would be a better year for the restoration of the values and dignity of Ekiti State.

The governor decried how Ekiti State lost its World Bank rating as one of the best states for ease of doing business as the immediate past government in the state engaged in practices that were not in tandem with global best practices.

This was disclosed in a statement issued yesterday by Mr Mark Longyen, the Governor’s Senior Special Assistant on Media and Publicity.

It added that while the sentences of three of the convicts were commuted to absolute pardon, the third convict had his life sentence commuted to 21 years.

Oyetola expressed profound gratitude to the people for electing him in the last governorship election in the state.

The governor who described 2019 as ‘Year of Hope and Abundance’, said his administration is poised to bring to the people the much desired development in all strata of the economy.

On his part, Aregbesola lauded the people for voting and supporting the continuity bid initiated by his administration.

He appreciated the people of the state for being supportive to the present administration just as he expressed confidence in the Oyetola’s government to take Osun to greater heights.

He event was witnessed by the state Deputy Governor, Benedict Alabi, the Chairman of the All Progressives Congress (APC) in the state, Gboyega Famodun and APC senatorial candidate for Osun Central, Dr Bashir Ajibola and top government functionaries.

The governorship candidate of Peoples Democratic Party (PDP) in Kwara State, Hon. Razak Atunwa, has urged the people of the state to shun any provocations that may likely lead to violence as the elections into various political offices draws nearer in the country.

Atunwa’ in his new year message to the people of the state yesterday in Ilorin said that, the people should continue to live in peace and harmony as the Kwara has been known for.

According to him, “it is in atmosphere of peace and tranquility that much needed socio-economic development can come to the doorsteps of the populace.”

He said the people of the state remain a major factor in the socio well being of the state hence they should shun any forms of actions that may cause disharmony among them.

Atunwa added that, “as the election is far approaching, they should be up and doing to maintain the status quo by coming out to vote for PDP so as to ensure continuity of good governance in Kwara”.

Similarly, the All Progressives Congress (APC) governorship candidate in the state, Alhaji Abdulrahman Abdulrazaq has cautioned the people of the state to resist every temptations posed by increasing provocations from the anti democratic forces in the country.

He, however, said that, the people should ensure that their activities are within the confines of extant laws and electoral regulations throughout the season of elections.

Wife of the Governor of Anambra State, Mrs. Ebelechukwu Obiano has said that she would build more houses for indigent women in Anambra State in 2019.

Mrs Obiano, who has become popular for the building of free bungalows with water facilities for indigent women in the state in a new year message said she was ready to put more smiles on the faces of people in the state.

In her New Year message which was delivered by Mr. James Ozumba, Chief Media Officer to Governor Willie Obiano, she stated that this year, she would redouble her efforts, using her NGO; Caring Family Enhancement Initiative (CAFÉ) to rally philanthropist and ensure bigger empowerment for indigent women. “I have facilitated the training and empowerment of over 4,350 indigent widows, women and youths in self-reliant small-scale business ventures.

South-south Group Asks Politicians to Save Nigerians from Further Bloodshed

A coalition body, South South Reawakening Group (SSRG) has appealed to politicians to halt the spate of killings in parts of Nigeria but join hands to support and build a progressive society.

The group, in its New Year message to Nigerians, also challenged INEC to conduct what will be adjudged to be the most free and fair elections ever to be conducted by any government since the inception of democratic government in the history of Nigeria.

SSRG, in a statement signed by its Convener, Joseph Ambakederimo, stressed the need for a reawakening and individual sacrifices to be made by Nigerians and particularly politicians for the country to be put on the paths of real progress.

Ositelu Asks Nigerians to Use Their PVCs Wisely

Accord Party presidential candidate, Isaac Babatunde Ositelu, has called on Nigerians to use their Permanent Voters’ Cards (PVCs) wisely by voting for a new Nigeria in the new year.

He also enjoined to make the their PVCs their weapon against all forms of insecurities and power blocks that have influence destiny. Ositelu in his new year message yesterday, said the biggest and most powerful but ignored by all the power blocs are the masses and youths.

“He advised that with general election fast approaching, Nigerians should their PVCs wisely by voting for a new Nigeria.

“As we match forward in this year, let us match forward with one common purpose to change the course of history for Nigeria and Nigerians once and for all by noting for Accord party massively in the forth coming election. Nigeria is the beacon of light- of hope to other African nation and to black race everywhere. The country that is set on high cannot be hide. No one light a candle and put it under a table. Your PVC is your light to shine into every corner of Nigeria darkness. If you have not collected your PVC – please go and collect it and use it wisely by voting massively for Accord party. Please let us avoid looking back to those who led us astray.

“Looking back to these same politicians who have gamed the system to enrich themselves and their families have nothing to offer us that will improve our lives.

“We say no more to living in the slumps of Ajegunle, Makoko, Ogoni, Guadalajara and IDP camps. We say no to poverty, hopelessness, backwardness, diseases, infant mortality and short life span. Things that are obvious and basic necessity of life still remain luxury in our country because of incompetence and structural arrangement coined.”