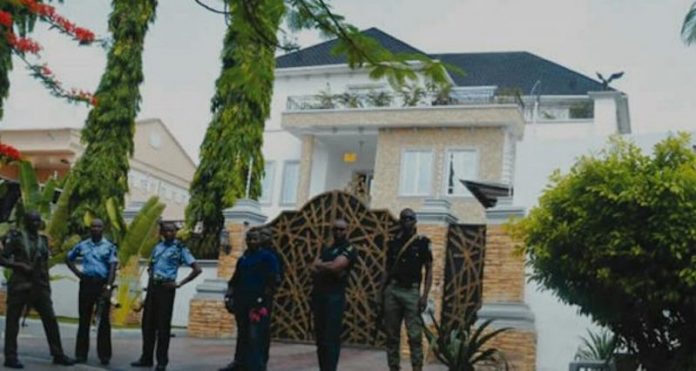 By Ahamefula Ogbu and Adedayo Akinwale in Abuja

The Nigeria Police yesterday confirmed that they had actually barricaded Senator Dino Melaye’s house, insisting that he must surrender or they continue the siege emplaced to take him in for trial over alleged attempted culpable homicide.

A statement from the Police Public Relations Officer, Deputy Commissioner of Police, Jimoh Moshood explained that they needed him to face trial for the alleged shooting one Sergeant Danjuma Saliu while on duty on July 19, 2018 in Kogi State.

However, a statement earlier issued by the besieged Senator raised the alarm that the police had surrounded his house with the intention to plant guns and turning round to accuse him of misdemeanor.

His party, the Peoples Democratic Party (PDP) also issued a statement alleging that the ruling party was deploying the police as agents of the state to harangue their members for allegedly booing President Muhammadu Buhari during his budget presentation to the joint chambers earlier in the month.

According to the PPRO, “The Police operatives currently in the residence of Senator Dino Melaye are to effect his arrest to answer to the case of attempted culpable homicide on the shooting of a Police Officer, Sgt. Danjuma Saliu, attached to 37 Police Mobile Force (PMF) while on duty at a stop and search point along Aiyetoro Gbede, Mopa Road in Kogi State.

“The above offence was committed by Senator Dino Melaye and his armed thugs in Kogi State on the 19th July, 2018 when they shot and wounded a police officer, Sgt. Danjuma Saliu, attached to 37 Police Mobile Force (PMF) while on duty at a stop and search point along Aiyetoro Gbede, Mopa Road in Kogi State. The Police Officer is yet to recover from the gunshot injury he sustained during the attack and still under intensive medical care.

“The Force will not tolerate attack on his personnel by any individual no matter how highly placed. The law must take its course.

“Members of the public will be kept informed on further development in the investigation of the matter.”

Spokesman of the PDP, Mr. Kola Ologbodiyan, said Melaye had a few days ago raised the alarm over plot by the Inspector General of Police, Mr. Ibrahim Idris, to forcefully arrest him and inject him with poisonous substances due to his outspokenness against the misrule, corruption and infractions of the Buhari administration

He rejected the “gestapo-like attack” on Melaye residence and demanded that the invading security official vacate the premises immediately.

Ologbodiyan said that the invasion was part of the larger machination by the Buhari Presidency to use state apparatus of power, particularly the police under IGP Idris to harass, intimidate and clamp down on opposition members in a bid to create fear and subjugate the opposition ahead of the 2019 general elections.

According to him, “It is therefore devious of the Nigeria Police, which had distanced itself from the plot, to turn round to invade Senator Melaye’s residence held hostage and beat up his domestic aides.”

The PDP therefore cautioned the Buhari Presidency to desist from such provocative acts as such cannot bend the resolve by Nigerians to replace him with the PDP Presidential candidate, Atiku Abubakar, as their next President, come February 16, 2018.