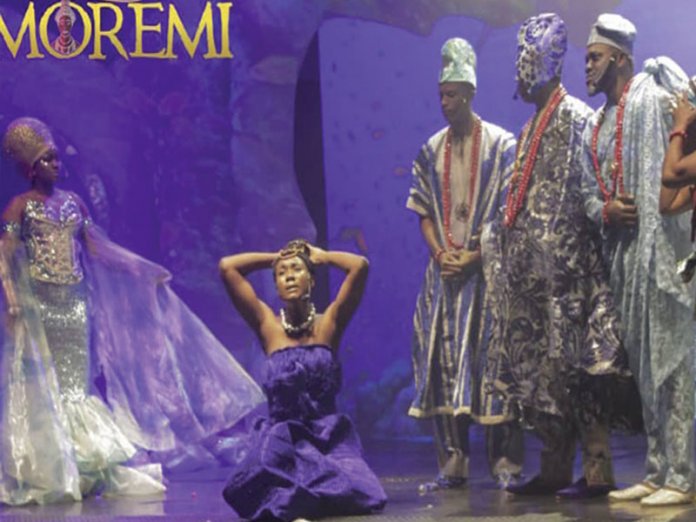 In its opening night, the cast of Queen Moremi the Musical took to the Terra Kulture stage with a sense of pride in bringing to life the strides made by 12th century princess Moremi Ajasoro, who, through her love for her people and sacrifice helped the people of Ile-Ife regain glory.

Two-hour long, the evening’s opening by a soloist was a daring tribute to the Queen Moremi. Regally donned in blue apparel, the performer captured the bravery and selflessness of the queen, shifting between high and low vocal ranges to accentuate the aforementioned qualities. Showered with an accolade of thunderous claps from the audience, the opening helped shaped the expectation for the evening, leaving most persons readjusting into comfortable positions for what was about to come.

Whilst it follows the tales in many historical books in an unaltered presentation, a major aspect of the play was the costume set and stage. Lush with varying cultural pieces peculiar to the Yoruba people, the angle of costuming afforded a surreal experience: ranging from the raffia ensemble and grotesque face masks of the Ugbo warriors to the fin-like details to depict the marine form of the Esimirin and her acolytes. The stage backdrop projections and stage lighting too, aptly projected themes and moods for each scene, immersing the audience into that era when she existed.

Plagued with doubt, Bolanle Austen-Peters was at first hesitant about directing the epic, being that a good body of her work leaned towards contemporary stories like SARO the Musical and Wakaa the Musical. Meticulously exploring the nature of the project for up to six months, and a further nudge from First Lady of Ogun State, Olufunso Amosun, she considered directing the musical. Thus, making it her first venture into the traditional/epic genre.

“Princess Ronke… she brought the script to me and I said ‘no, no, no, I only do contemporary plays.’ And you know obviously all the conflict between religions; Christians, all the traditional beliefs. So I told her I cannot do it, she was persistent for over six months. I am glad I did this. It is essential for us to know our roots; and celebrate our history and heritage.”

A fusion of dance, singing and acting, the set manages to identify with modern day lifestyle through its use of satire and various musical genres like gospel, jazz, soul, and opera, all mixed with traditional African influences whilst preserving culture through ‘Bata’ dancing, and simulating the rituals ascribable to the Ile-Ife people.

With the spirit of nationalism, Queen Moremi global ambassador Ronke Ademoloye felt a strong need to bring the story of Moremi to theatre, hinting that through ventures like these, youths will be empowered and inspired into taking up acts of selflessness and prioritising them for the greater good of the society.

“The story of Moremi that we have out there; it doesn’t capture a lot, and when we were putting the story together, we had to go to Ife to do a lot of research because there wasn’t really anything on the internet,” explained Ronke, detailing the inaccessibility to historic information.

“It is a story of ultimate sacrifice; it is a story of leading. So, we are telling the younger generation that they should try and do away from this ‘me, me’ culture, and do whatever they can do to give back to the people around them. They don’t need to start with the nation, but they can help people around them; how they can have a positive impact, and that is what the story of Moremi is all about – being able to go out of your way and give.”

Impressively, the first show went off without any technical glitches and managed to gain and maintain the attention of nearly 400 seated guests through its seamless plot of cultural heritage and resplendence. For its first show on Friday, December 21, it clearly sets the standard of what is to be expected from the rest renditions of the play which is scheduled to hold at the Terra Kulture arena from Saturday, December 22 to Wednesday, January 2, 2019, with the exclusion of Christmas day.

Queen Moremi the musical marks the third project launched by the House of Oduduwa in promoting the rich culture of Yoruba people, and also help empower women generally.