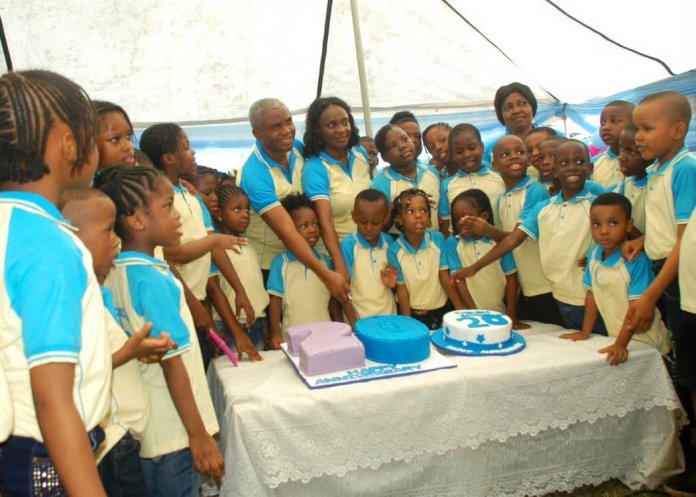 For Chelsea Schools, it has been two two decades of excellence. At a recent event to mark this landmark, Sunday Ehigiator, writes that it was an opportunity to reminisce on its growth process and achievements

It was a typical grass to grace story for Chelsea School located at Satellite Town in Lagos. In 1998 when it began, it was birthed in a semi-detached one room inside a duplex. It’s foundation was laid by Mr & Mrs B.N. Igbokwe on September 7, 1998, with only four students, namely; Raymond Onwunali, Obinna Onwulani, Kenechukwu Nwaolisa and Late Chinonso Nwaolisa.

It has since grown through the ranks, evolving with trending standard of education as we have today, and in the process recorded great successes.

At the ceremony to mark the landmark achievement at the school grounds in Satellite Town, the event opened with melodious song renditions from a group consisting of instrumentalists and singers, followed by several other performances by same band.

The pupils of the school didn’t fail in showcasing their talents at the occasion. They entertained all present with their prowess in handling musical instruments as groomed by the school, when they lead the guests in reciting Hymns, the National and school Anthems, and their respective pledges.

There were likewise moments of cultural display by pupils of the school and different professional cultural dancing groups, ranging from the Igbo culture to Benin culture, who performed at the occasion as a show of solidarity to the school. Amidst that, there were plenty to eat and drink; from traditional delicacies; such as pounded yam and Egusi soup, Semolina and Afang soup, palm-wine etc. to regular foods such as fried rice and Jollof rice, all washed down with drinks etc. for all to merry, no matter the ideology you subscribe to, be it traditional or western, you were covered.

In his goodwill message, Rev. Father Onyekwere, lifted the tempo of the occasion with the story of a tree who has been a friend in need to a young child from cradle to adult age, even to the man’s offspring. He compared Chelsea School to that tree, with an affirmation that, “this school is a blessing to humanity. It has produced fruits for the benefits of all, without discrimination. The testimonies abound”.

In her welcome address, the school Proprietress, Mrs Igbokwe Adaoma Uche took a trip down memory lane. She said, “For some of you, this event marks the culmination of a 20 years story, a story that started with a very humble beginning by Mr. and Mrs. Dan Igbokwe on September 7, 1998.

“As you may know, Chelsea School started with only four children, Raymond Onwunali, Obinna Onwunali, Kenechuckwu Onwaolisa and Chinonso Onwaolisa (May his gentle soul rest in peace). A week later, Ayodele Salami and Deborah Bright who was the only girl joined us.

“Mrs. B.N. Ezeagbor was the first and only teacher, while a month later, Mrs. C.N. Nwankwo came on board. Both teachers were great contributors to the growth of Chelsea School. They were the foot soldiers who combed houses for children to join our school. Their efforts will never be forgotten. Thank you so much and God bless you.

“All our parents played great roles advertising the school to people in satellite Town and its environs. In those early years, Mrs. Gloria Salami, one of our dedicated parents played a big role in bringing group of equally dedicated parents, who wanted a school that will provide quality education for their children. Thanks to her and all our wonderful parents.”

Speaking further on the objectives of the school since inception she said: “The goal of any school is to provide students with a strong foundation of knowledge and life skills, which are the primary tools for success in life. This can be seen in our mission statement, which is ‘to develop the skills and knowledge of every child across a broad and balanced curriculum that will help them prepare for adult life.”

To achieve this, Chelsea School shifted from a more traditional curriculum to a more holistic curriculum focusing not only on curriculum content but also on context and application; namely, ‘The understanding of concepts and the mastering of skills’.

According to her, although this is not an easy task of course, but Chelsea School rose to that challenge 20 years ago and continues to address it till date.

She said: “I want to let you know that while much has changed in the last 20 years, the goal has not. I therefore use this opportunity to let our wonderful parents know that your trust in me to pursue this has greatly contributed to our success and I am very grateful for your support.

“By and large, our success story would not have been possible if not for God and my husband; Mr. Dan Igbokwe, who at all times gave both moral and financial support for the growth and development of the school. Thanks a lot and God bless you. I also appreciate the organising committee especially Miss. Chinyere Ukaogo for getting our old students together after such a long time.

“Today is a celebration of all that is good about our students, parents, teachers and the school. Since inception, we have been able to sustain and improve the standard of education in Chelsea School. We have a well-balanced curriculum which ensures that children who walk into the portals of our school will not just love their school years but truly be prepared to face life’s challenges.

“Our old students scattered all over the world, are doing well in prestigious universities and working in different sectors of the economy. We have taken a completely new turn for blooming up the educational system by striving for excellence and achieving it in a special way.

“This is why we have gone a step further to set up our secondary school; Kel-Chelsea High school which started in September, 2016 and will be writing the first Junior W.A.E.C/NECO in 2019.
This is a school where students are encouraged to unleash fullest potential.

“By fostering a conducive environment full of love, care and creativity, we instill in our students a desire to learn with emphasis on their social, emotional, physical, aesthetic and intellectual development aspects.

“I want to thank the entire staff of Chelsea School, as led by Mrs. B.N. Ezeagbor and Mrs. S.O. Okwuosa for their commitment and dedication to duty. Most of them have worked here for over 10 years to 20 years, and we are now like a big family. It will take time to mention all your names and I pray that your efforts in everything you do will never be in vain”.

Speaking with THISDAY, the special outstanding teacher award winner of the occasion, Mrs. Beatrice Ezeagbo, who also doubles as the school administrator and oldest teacher, said: “I have worked in Chelsea School for 20 years. I started with four children. I wanted to quit teaching when Mrs. Igbokwe approached me.

“Before I came to ChelseaSchool, I have worked in another school at Anthony Village here in Lagos for 11 years. When she came to me, she told me of her plans to start a school. When I looked at it, I initially told her that I am no longer interested in teaching, till she agreed on my conditions to only work with her just for one year; to start the school.

“So we started with those for children, till they started to grow and the children started to improve. Those who had difficulty in reading, started picking up, even those that people could have referred to as dullard, once they came into Chelsea school, we took it as our mission to give such child extra attention, and we bless God, because within a matter of three months, such children are always able to read and understand.

“That was what sold our name far and wide, and how we turned into a school with this large population, and among the best in this Festac/Satellite town. My passion for children improvement and teaching, made me stay in ChelseaSchool after the one year. And also the results we started recording after the first year.

“Not only in terms of academics, as our students that left here have been making waves far and near the country, but likewise in terms of morals, behavioral change, sports and skills acquisition. And I bless God for where we are today, to the extent that we now have a secondary school out of the demands from parents, goes a long way to show how good this school is”.

The chairman of the school Mr. Daniel Igbokwe, could not curtail his excitements in his interview with THISDAY, thereby revealing other plans of the school, despite their current achievements after 20 years. According to him, he said, “to the glory of God, it’s not been easy. Especially when you start a school from a very modest way like we did. But I am so grateful to God for all the accomplishments. It’s a journey of gradual but steady growth.

“Arising from the demands of parents; just two years ago, we started a secondary school. In the next years, our expectations is to be fully grown to the point where, it will be the number one school around not just Festac and its environs, but in Nigeria as a whole. And by then, based on our plans by the grace of God, we intend to have dormitories where we can really groom students to really appreciate what life is all about.

“Also, so we can spend more time with them; than they spend at home, shaping them rightly into the society they will fully be entering into when the graduate from Chelsea Schools”.