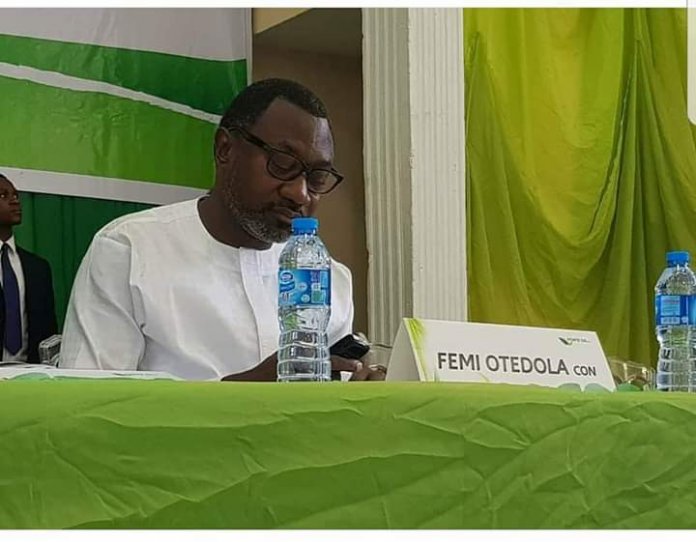 The Chairman of Forte Oil Plc, Mr. Femi Otedola, is set to sell his 75 per cent direct and indirect shareholdings in the company, according to a notification to the Nigerian Stock Exchange (NSE).

The notification, which was signed by the General Counsel of Forte Oil Plc, Akinleye Olagbende, read: “Forte Oil Plc hereby notifies the Nigerian Stock Exchange (NSE), Securities and Exchange Commission (SEC), shareholders and the investing community that its majority shareholder, Mr. Femi Otedola, has reached an agreement with the Prudent Energy team, investing through Ignite Investments and Commodities Limited, to divest of his full 75 per cent direct and indirect shareholding in the company’s downstream business.

“ Otedola’s divestment from the downstream business is pursuant to his decision to explore and maximise business opportunities in refining and petrochemicals.

“The transaction is expected to close in the first quarter (Q l ) of 2019 subject to the satisfaction of various conditions and receipt of applicable regulatory approvals.”

The market received the divestment news positively as the share price of Forte Oil rose by 9.8 per cent to N31.25 per share. This is the highest price since June 24, 2018. The shares have recorded year-to-date (YTD) decline of 28 per cent, underperforming the NSE All-Share Index, that has recorded a YTD decline of 16.4 per cent and the NSE Oil & Gas Index which has shed 13.7 per cent so far.

Otedola, through its company, Zenon Petroleum and Gas Limited, bought the stake of Incorporated Trustees of NNPC’s Pension Fund in Forte Oil, then known as Africa Petroleum Plc 11 years ago. That acquisition made him the majority shareholder of Forte Oil Plc and the company was rebranded in 2010 to its new name. The company’s performance has been affected by the challenging environment over the years. For instance, it recorded a profit after tax of N5.794 billion in 2015. This fell to N2.890 billion in 2016 before rising to N12.2 billion in 2017.

However, the company early this year announced plans to restructure its business by divesting its upstream services, power generating businesses in Nigeria and downstream business in Ghana.

Shareholders of the company had approved this restructuring plan at the company’s annual general meeting (AGM) last May.

According to the shareholders, “subject to the approval of regulatory authorities, the directors of the company be and hereby authorised to restructure the company by divesting its upstream services business(Forte Upstream Services Limited); its power generating business(Amperion Power Distribution Limited and its downstream business in Ghana(AP Oil and Gas Ghana Limited) at such time and such terms and condition as may be determined by directors of the company,” the company had explained.

Forte Oil Plc had said its decision to divest from upstream services and power generating businesses would boost its distributable earnings for the benefit of shareholders.

According to Forte Oil Plc, following the significant changes in the oil and gas industry in recent years, it believed that only downstream operators with huge investments in both storage and distribution infrastructures can remain competitive and operationally efficient in the long run.

It explained that although power business profitable, it has huge receivables due from the Nigeria Bulk Electricity Trading Plc (NBET) and a significant portion of its distributed earnings is also utilized in servicing the acquisition debt finance.

The company said despite the significant resources deployed the upstream services business has consistently contributed less than seven to the Group earnings in the last three financial years.

Similarly, its downstream subsidiary in Ghana has consistently declared losses after tax in the last three years and has substantial bad and uncollectable trade debts in the business as a result of negative economic conditions and currency devaluation in prior years.

The proceeds of the divestment initiative will also enable your company to compete more favourably and achieve the planned expansion of the business for increased market share,” Forte Oil had said.