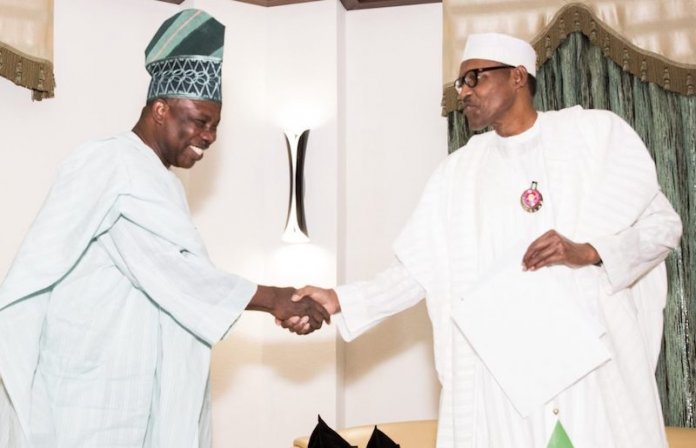 President Muhammadu Buhari yesterday in the Presidential Villa, Abuja received the letter of his adoption as the presidential candidate of the Allied Peoples Movement (APM) from Ogun State governor, Ibikunle Amosun, and the National Chairman of APM, Yusuf Dantalle.

Buhari’s acceptance of the letter from Amosun was perceived to imply his clear support for Amosun’s movement of his political structure from the All Progressives Congress (APC) in Ogun State to APM.

This looks ironic however, as the National Working Committee (NWC) of the APC led by Adams Oshiomhole had last week threatened to expel Amosun over alleged anti-party activities.

There have been irreconcilable differences between Amosun and Oshiomhole over the refusal of the latter to field the anointed candidate of Amosun, Abdukadir Akinlade as the governorship candidate of APC in Ogun State.

Answering questions from journalists after presenting the letter to Buhari, Amosun said the presentation was the fallout of the proclamation of Buhari’s adoption last week by APM.

“You will recall that just last week we made public that APM has adopted President Buhari as their presidential candidate. I had promised to bring the letter they had given me to present to him and that is what we came to do today. And you know Mr. President is a very gracious human being, he is a man with a good heart.

“He said if a party has adopted him, it is only fair he acknowledges the party and the chairman. That is why we are here.

“I have said that anybody that is for President Buhari is for me. We will embrace such party, such person, such organisation wholeheartedly and that is what I am doing and that is what we are doing in Ogun State.

“Clearly Mr. President will have a massive vote in Ogun State in the coming election,” Amosun claimed.

Asked on his reaction to the threat by the National Chairman APC to expel him over alleged anti-party activities, Amosun declined comment.

“I don’t want to comment on that. We came for this. Let’s restrict ourselves to this. I want my president to win. What else do you want? We must win that is it,” he said.

Also speaking on why APM adopted Buhari, Dantalle claimed that “Buhari is giving us back the Nigeria of our dream.”

Commenting on the chances of APM at the 2019 polls in Ogun State, Dantalle said, “I am very confident. You saw it yourself last week and you can attest to it.”