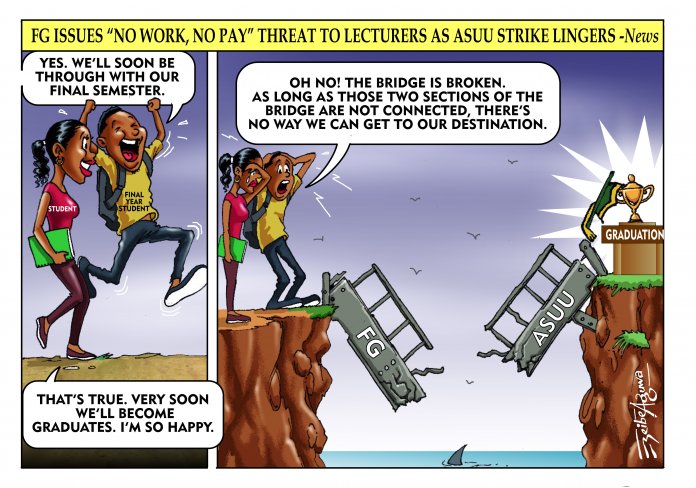 The federal government in 2013 signed an agreement with the Nigerian university system to expend N1.3 trillion on the rehabilitation of our public universities in an effort to raise them to acceptable standards and to be able to produce self-reliant, employable graduates.
Former President Goodluck Jonathan paid N200 billion for upgrade works to commence in the 84 public universities across the country. The outstanding balance of N1.1 trillion was to be paid in annual tranches for five years.

After that 2013 disbursement, the federal government failed to make the subsequent yearly payment expected in 2014, 2015, 2016, 2017 and 2018; prompting the Academic Staff Union of Universities (ASUU) to embark on the strike that is currently ongoing.

After the 2013 ASUU – FG accord, the federal government has apparently shown very little (if any) interest in addressing this quality of tertiary education issue being canvassed by ASUU. Even the government of change which rode to power in 2015 promising to totally revamp the education sector has done very little to keep to the accord – refusing to pay the 2015, 2016, 2017 and 2018 tranches of payments totalling N880 billion to the universities.

This government apathy towards education has been plausibly attributed to the fact that the offspring of policymakers and government officials in the corridors of power (who have the wherewithal to settle the education matter once and for all times) do not school in Nigerian public schools, hence their apathy and lack of concern.
It is public knowledge that two children of President Muhammadu Buhari – Zara and Yusuf – graduated from a London University a while ago. Recently, Ahamefula, the son of Governor Rochas Okorocha also graduated from a Manchester University.

Last November, Professor Abubakar Adamu, a former Vice Chancellor of Bayero University, Kano, who is presently the Executive Secretary of the Nigerian Universities Commission (NUC) publicly flaunted his son’s graduation from a British university, right in the thick of the ASUU strike.
It is very evident that the National Association of Nigerian Students (NANS) is now a shadow of its former self. Rather than seek to charge the government to account for its refusal to be concerned about our ailing universities, NANS has maintained a studied, embarrassing silence in the face of this debacle.

Officials of the association, having deviated from the objectives of safeguarding and promoting the welfare of students in the country (which is the sole reason for its existence), switched to singing the praises of politicians who can hardly be said to have contributed in any way towards the improvement of education in the country as well as awarding worthless plaques to them.

Some days ago, the NANS PRO, one Bestman Okereafor was in the news commending President Buhari and requesting him to reshuffle his ministers. Not a single word about the ongoing strike was said by the PRO. This goes to buttress the present decayed state of the association.
Government has to introspectively examine its lacklustre approach to this education reform demand of ASUU. So far, it has given the matter short shrift and this neglect is deepening the decay of the education sector in the country. Government has to stop reneging on the pact it signed with ASUU – no excuse suffices for this inconsistency considering what is at stake.

This present state of affairs is unhealthy for any nation that seriously desires developmental progress. It is therefore obligatory for the government to give urgent attention to the education area (in line with ASUU’s plea) and renew its commitment to the total overhaul of the sector in the interest of the future of the country.

The campaign for educational reform should not be left to ASUU alone. Nigerian Students (being the worst affected by government indolence and refusal to do the needful) have to take a far more active interest in these matters. Rather than idle by and expect things to sort themselves out, students should be asking questions and prodding government to keep its word by implementing its part of that agreement – the revitalisation of tertiary learning in the country.

It is election season and students constitute a massive voting bloc. In preference to spending every spare moment on social media hurling invectives at one another across political divides, students can band up and trenchantly demand positive action from political parties and candidates, especially the ones in office, before considering them for electoral support.

It would be a fine thing also if NANS can rouse itself from its slumber and mobilise the students it marginally represents to form one united front which will pressure the government to yield to the rational enjoinment for educational reform.

ASUU, despite having undeniably genuine demands and crucial concerns has to eschew its evidently solipsistic posture and find a common, workable ground with the government, especially in these days of national fiscal privation.
The union should do well to consider the plight of students who are hardest hit by the disruption occasioned by this ongoing industrial action. It has succeeded to bring the federal government to the negotiation table and should endeavour to reach a workable understanding in the interest of all concerned parties.
––Odey wrote from Garki, Abuja