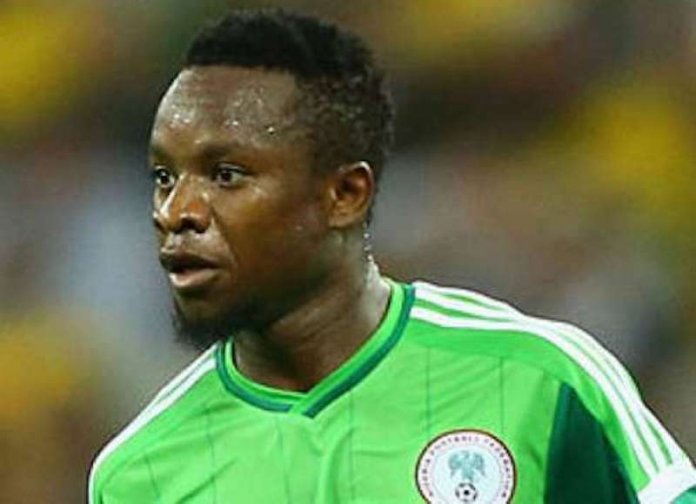 He played a prominent role in Super Eagles winning the 2013 Africa Cup of Nations and was involved in Nigeria’s four matches at the 2014 World Cup in Brazil. Injury and poor form have denied him of regular playing time in the national team. Ogenyi Onazi, however, assured that he is still targeting international glory with the Super Eagles

Nigerian international Ogenyi Onazi has reiterated his commitment to the Super Eagles and said that he was always happy to play for his country.

Onazi, 25, missed the last three matches due to injury as Nigeria returned to their first Africa Cup of Nations since winning the tournament in 2013.

His performance in his last appearance away to Seychelles after the World Cup raised question marks over his form and fitness, but the midfielder insisted he was back to his best form at Trabzonspor.

“It was a tough time I must admit, but despite all the criticisms I remain committed to playing for my country,” Onazi told BBC Sport.

“Whenever I go out there to play, I give 120 per cent , but unfortunately my Achilles tendon problems slowed me down.

“Now things are looking up again for me at club level, I hope to keep giving my best to my country as well.”

The Super Eagle has been a key part of Trabzonspor’s run of good form since September. They sit 7th in the Turkish Super Lig table and he wants to replicate that form with Nigeria.

“After what happened in Russia, it was important for all the players to ensure a return to the African Cup of Nations.

“It’s an exciting feeling to achieve that and we can only hope that collectively we can all bring our good club form to the national team.

“The last time I played in the tournament we won it and we as players have to go back again with the mentality to win it, and if we can’t, we shouldn’t be there,” Onazi said.

Onazi started his professional career in Italy with Lazio, winning the 2013 Italian Cup, before switching to Turkish side Trabzonspor in August 2016.

He played for Nigeria at the 2009 U-17 World Cup on home soil and has scored once since making his senior debut against Liberia in October 2012.

Onazi, who has 51 international caps, helped Nigeria win the 2013 Africa Cup of Nations, and played in all four of his country’s games at the 2014 World Cup in Brazil.

The midfielder is having quite an impressive campaign in the Turkish top-flight but has struggled for form in Gernot Rohr’s team.

After fighting off criticism for his recent performances in the national team,  the Trabzonspor midfielder has reiterated his commitment to bringing his fine form from the Turkish Super Lig to the Super Eagles.

The 25-year-old has produced fine displays for Trabzonspor who are seventh in the league table and even scored a goal in their 3-0 victory over Konyaspor last Saturday – his second in the league this term.

On Sunday, Onazi scored an own goal but provided an assist for compatriot Anthony Nwakaeme as they settled for a 2-2 draw against Besiktas.

His last appearance was in Nigeria’s 3-0 win over Seychelles back in September.

Onazi who was a member of Gernot Rohr’s squad to the 2018 FIFA World Cup did not make a single appearance at the tournament in Russia.

However, the former Lazio admitted that he has battled criticism and injuries in ‘a tough time’ and declares himself ready to play for three-time African champions.

Following a 1-1 draw with South Africa in November, Nigeria returned to the continental stage for the first time since 2013 after missing the last three editions of the Africa Cup of Nations.

And the Jos-born star who was part of the winning team that lifted the title in South Africa eight years ago has set his sights on another silverware.

Nigeria top Group E with 10 points from five matches and will wrap up the qualifying round when they host Seychelles in March 2019.

Onazi spent five years with Lazio, where he was under contract until 2018 but moved to Turkey in 2016 after joining Trabzonspor.”I needed to make this move to clear my head and be happy playing football again,” he told BBC Sport.

Injury and lack of form hampered him and he almost left in January, when a proposed loan move to Bundesliga side Werder Bremen collapsed.

He played 20 games for Lazio during the campaign, although he became a more regular starter when Simone Inzaghi took over as coach in April.

“I left Lazio for personal reasons,” said Onazi, who had two years left to run in his contract at the Stadio Olimpico, and had been offered a deal to extend it.

“It might be difficult for some people to understand my decision but this is a step forward in my career.

“The Lazio coach spoke to the management about keeping me. I was even offered a contract extension to stay but Trabzonspor provides a new lease of life. I will always be a Lazio fan because the club gave me the platform to be the player I am today.”

Former Lazio and Nigeria striker Ayodele Makinwa, the midfielder’s agent, said that Onazi would benefit from the move.

“He desperately wanted a change and new motivation,” said Makinwa.

“Trabzonspor is one of the biggest clubs in Turkey and it is a stepping stone towards achieving his goals as a professional footballer. Joining a club fighting for the title will challenge and push him to the next level. He will definitely be one of the leaders in the team and this should serve as a motivation to achieve what he wants.”

Onazi began playing football in the streets of Jos in 1998. His football skills and abilities drew a lot of attention to him and afforded him the opportunity to play in some academies in the city.

His footballing abilities came to prominence when he moved to Lagos to play for My People.