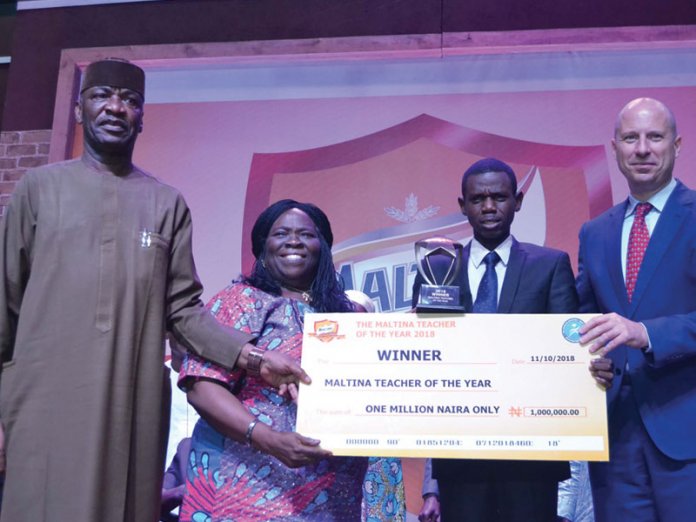 From the doldrums of falling education standards and societal scorns, Nigerian teachers are being rewarded and motivated to raise a new generation of students through the Maltina Teacher of the Year awards, reports Bayo Akinloye

Flanked on the right by the Minister of State for Education, Prof. Anthony Anwukah and a jury member of the Maltina Teacher of the Year Award, Prof. Mopelola Omoegun, Opeifa Olasunkanmi – the winner of the 2018 Maltina Teacher of the Year Award – stands tall, unflinching with his award plaque firmly held in his hand as his dreamy eyes shone on a night never to be forgotten. To his left was the Managing Director of Nigerian Breweries Plc., Jordi Borrut Del.
Amidst the flickering flashes of the cameras, other winners on the night formed the silhouettes of a glorious moment of triumph in the face of tribulations most of Nigerian teachers have had to endure in 2018 and previous years. On the night of the awards by Nigerian Breweries, the spotlight was on Nigerian teachers across the states that emerged as “state champions” and amongst them Olasunkanmi emerged the ultimate winner.

In a hotly contested competition, Samuel Popoola, looking dapper in a well-tailored suit and Olalekan Adeeko, who was dressed in a flowing black agbada and a cap to match, stole the show. The D-Day was October 11, 2018 when Nigerian Breweries in its remarkable fashion continued a tradition to honour and enrich Nigerian teachers and the teaching experience – since 2015, the company has carried this tradition with the passion of religion.

The same cannot always be said about the Nigerian government. It will be recalled that in October 2017, that the Kaduna State Government was accused of exposing teachers in its employ to public ridicule. The government had claimed that about 21,780 out of 33,000 teachers failed a Primary Four test.

During an education retreat held by the Presidency at the old Banquet Hall of the Presidential Villa in Abuja, the Minister of Education, Adamu Adamu, had called on President Muhammadu Buhari to pay attention to education the way he was doing to insecurity and the economy.

The reason is obvious and timely: the Buhari administration in its 2018 Appropriation Bill allocated much lower than the 26 per cent of national budget recommended by the United Nations to the education sector just as Buhari admitted that education has suffered serious neglect in the hands of successive administrations.

“Today, it is those who acquire the most qualitative education, equipped with requisite skills and training, and empowered with the know-how that are leading the rest. We cannot afford to continue to lag behind. Education is our launch-pad to a more successful, more productive and more prosperous future,” the President had said.

So much of a sound bite, said people who listened to him, because they believe successive governments at all levels in Nigeria have only succeeded in paying lip service to revamp education particularly in the area of teachers’ motivations. The attitude is not the same with Nigerian Breweries.

Back to the night of glory for Nigerian teachers: for Olasunkanmi, a teacher at the Government Day School, Karu in Abuja, his passion for teaching was richly rewarded by Nigerian Breweries. He went home with N1 million, in addition to the N500,000 he received as a state champion from Abuja. That was not all; Nigerian Breweries will also give N1 million every year for the next five years and the company will also build a block of six classrooms for his school.

The English Language teacher commended Nigerian Breweries for the gesture and enjoined other corporate organisations to follow the worthy example.

“Today, I am very happy,” Olasunkanmi enthused. “And I’m proud that Nigerian Breweries has shown that teachers’ rewards are both in heaven and on earth.”

The ecstatic 32-year-old teacher was also philosophical on the night. According to him, teaching is not just about earning a living. It is also about having a strong passion for humanity and the emotional stability to impart knowledge regardless of the challenges.

No one could fault Nigerian Breweries on this night as the company continues with the awards for teachers to promote its decades-long philosophy – which began in 1994 – of “Winning with Nigeria.” With that lofty ideal, the company has been playing a more active role in the development of education in Nigeria when it established the Nigerian Breweries – Felix Ohiwerei Education Trust Fund with a commencement capital of N100 million.

Speaking about Nigerian Breweries investment in education, Borrut Bel stated that specifically in 2015, the company’s intervention in education was expanded to include teachers when the Maltina Teacher of the Year initiative was launched.

The initiative, the managing director said, was established against the backdrop that Nigerian teachers often do not get the recognition that they deserve despite “the pivotal role they play in determining the quality of education and the future of our country”.

THISDAY learnt that over the years, the Education Trust Fund has impacted positively on more than 25,000 students as the brewing company built over 400 classrooms, 30 libraries and laboratories in over 40 communities across Nigeria.

As the government struggles to cater for teachers’ welfare and students’ development, Nigerian Breweries stated that its “intervention” which has become an integral part of “our sustainability agenda has covered primary, secondary and tertiary levels of education.”

That much the government admitted when the junior education minister, Anwukah, noted that the story of the development of education in Nigeria will not be complete without Nigerian Breweries.

With a sense of appreciation Anwukah pointed out the brewing giant has been at the forefront of improving the educational sector by continually investing in educational infrastructure, encouraging teachers and students.
Apart from the N500,000 rewards as “state champions”, the first and second runners-up got an additional N1 million and N750,000, respectively. In total, the ceremony produced 26 state champions with each one of them going home with N500,000.

Bolanle Omole, a Mathematics teacher at Corpus Christi College, Ilawe-Ekiti, Ekiti State, was one of the state champions as she was adjudged the “best teacher in Ekiti State” by the award’s panel of judges. It should be mentioned that the recognition and prize money renewed her commitment to teaching and the fact that a teacher’s reward is not in heaven but right here on earth.

Delighted by the award, Omole narrated her sympathy-laden tale. “With two kids at the Obafemi Awolowo University (OAU), my husband and I have been struggling.
We had not received salary in the last five months,” she told the audience on the glittering night that overwhelmed any shadow of gloom.

Her tears of joy were well worth it as she went home in the sight of her husband –also a teacher – who had accompanied her to the awards ceremony with N500,000.

Omole added: “We have been engaging in petty trading selling snacks. We thank God and we thank the organisers of this initiative. This award and recognition have reignited the passion for teaching in us.”

Teachers feel ill-motivated and least appreciated because they are poorly paid and have become the subject of scorn by parents and the society. What is forgotten, education scholars asserted, is that “ill-motivated teachers breed half-hearted students.”

One of them, Theodorah Ezugoh, believes that teachers’ motivation is a way of empowering them on the job.
“Motivation involves the perceptions, variables, methods, strategies and activities used by the management for the purpose of providing a climate that is conducive to the satisfaction of the various needs of the employees, so that they may become satisfied, dedicated and effective in performing their task,” she explained.

According to a research work, “Teachers’ Motivation and its Influence on Quality Assurance in the Nigerian Educational System”, teachers can “influence the teaching–learning outcomes either positively or negatively” because they determine the quality of instructional delivery and also influence quality education when it comes to implementation of the curriculum and educational policies.

“In education, teachers should be motivated in order to boost their productivity, effectiveness, efficiency and dedication in performing their task, which will enhance quality assurance, quality education and quality instructional delivery in the educational system. This will also enhance the achievement of educational objectives,” Ezugoh added.

Dorcas Fareo, a Nigerian scholar, while commenting on the state of education in Nigeria, seemed to have suggested that the fine example of Nigerian Breweries should be the yardstick for other corporate organisations and the government.

“In this era of globalization, it is imperative that teachers are adequately prepared to function effectively in a challenging global environment. The challenges of globalization demands teachers who are competent, effective, and dynamic in their orientation,” she said.

Fareo also pointed in the direction of how primary and secondary teachers can further be helped to become the true jewels that they are in the eyes of the society and the government.

“Apart from the upgrading courses that the institute (NTI) has been implementing for many years (TCII, NCE and PTTP), the institute introduced proficiency Diploma Courses in Early Childhood Education, Guidance and Counselling, School Supervision and Inspection, and the Postgraduate Diploma in Education.

“Indeed, the institute believes that an effective implementation of the Universal Basic Education Curriculum must begin with strengthening the capacity of existing teaching force through in-service training and re-training,” Fareo explained.

On a night that was filled with glamour, grace and glitz, Nigerian teachers will have the gumption to tap into the enriching opportunities open to them by Nigerian Breweries through the Maltina Teacher of the Year award.
Dignitaries at the event included Yetunde Odetayi, Permanent Secretary, in the office of the Deputy Governor of Lagos; Boboye Oyeyemi, Corps Marshal of the Federal Road Safety Corps; and Desmond Elliot, a member of Lagos State House of Assembly, among others.

With the stakes high and life-changing, it is yet to be seen who will be 2019’s Maltina Teacher of the Year. Whoever it is, Nigerian teachers can heave a sigh of relief and become instant millionaires.