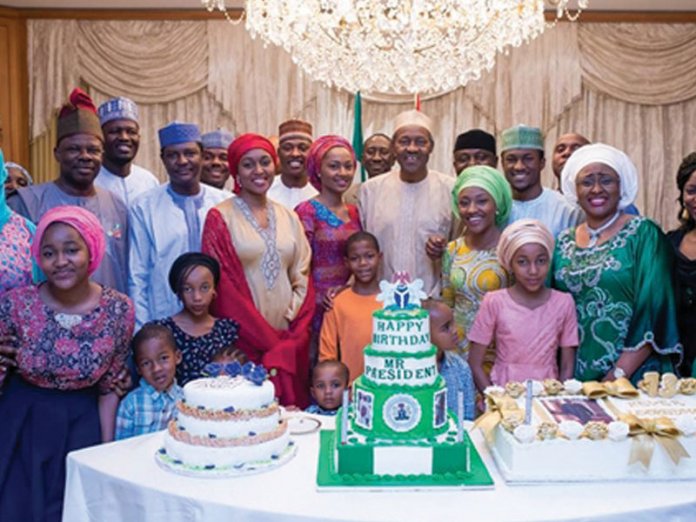 As family and friends gather to celebrate President Muhammadu Buhari’s 76th birthday, Emmanuel Umohinyang pays homage to a man he reckons has paid his dues in service to humanity

In the true tradition of noble service to man and community, President Muhammadu Buhari has since his youth consecrated his life to seeking the lasting good of his constituency – the cheated, the destitute, the poor, the grassroots people and the downtrodden.

He is a dedicated family man, vigorous defender of the poor and a teetotaler with a puritanistic social life and a clinical political attitude. He has never obtained any contract from anybody, whether in the public or private sector, throughout his professional career as a soldier not even now as a politician. He has never accepted bribes from anybody either.

Buhari is one individual in this country, who does not doublespeak. He is as constant as the Northern Star and he openly expresses and canvasses his views, without fears of anybody. He is not somebody, who patronises people or say what people want to hear.

Buhari is an enigma – tireless and bountiful in his desire for a better and prosperous Nigeria. He does some things that some people view as being extreme and he insists tenaciously on issues. This tells us something about the consistency, coherence, inner strength and quality of character of this man called Buhari. He does not swim with the tide.

I have learnt invaluable lessons from the few fortunate periods I had to work with him. He has the power to persuade and inspire others to the heights they might have thought unattainable. There is honesty in all he does. He is an embodiment of integrity.

Every administration, every leader has something that distinguishes it from others, whether good or bad.
In the case of the Nigerian nation, different kinds of leaders had come and gone and the memories of their deeds or misdeeds linger till date. Considering where the nation has found itself today, it will not be out of place to say that, perhaps, Nigeria’s biggest challenge is good leadership at all levels. Juxtaposed with the human and material resources the nation is endowed with, the issue of good leadership has no doubt been a scarce commodity in the polity.
Either in the military or civilian governments, Nigerians are in unison that poor leadership has greatly affected the fortunes of their country and badly too. Nothing could be farther from the truth, when one considers the false steps the Nigerian nation recorded shortly after independence.

Though the issue of ethnic and cultural division had been there from inception, Nigerians cannot forget the past which the older generation refers to as “the good old days”. This was a period when the different regions of the country competed to show their strength socially, politically and economically for the advancement of their people.
That is why we still hear the great virtues of great men like Sir Ahmadu Bello, Chief Obafemi Awolowo, Dr. Nnamdi Azikiwe and many others, who were a study in good leadership.

Unfortunately, after these great Nigerians left the stage, hardly can the nation boast of having leaders, who came close to them in terms of leadership. It was therefore unsurprising that Nigeria, which the world saw as a potential star, suddenly lost her place despite displaying impressive potential in a few years of infancy.

Chief among the root causes, were corruption, maladministration, nepotism and lack of vision, such that when Nigeria had all the money, it was either stolen or misapplied. However, the coming of the Buhari/Idiagbon regime in 1983 changed the narrative as it was a clear departure from our recent history.

Though the regime was blamed for truncating the elected government of Alhaji Shehu Shagari, and ruled through obnoxious decrees, history will no doubt record that administration as having the best of intentions for so doing. That the profile of Buhari and his erstwhile deputy, the late Major Gen. Tunde Idiagbon, rose tremendously much later is a major credit to whatever gaps their regime had.

Even the press which was a major casualty under the Buhari/Idiagbon regime later became the megaphone that spoke highly of both in later years. This, no doubt, aided Buhari politically, when he made a foray into the political arena as presidential aspirant.

Curiously, he did not achieve this with stolen money, but the fame foisted on him by integrity, accountability and pedigree as a defender of the poor.

Despite failing to realise his objective on three occasions, the fact that he was the “masses man” never diminished, as he had run the most robust campaign in our recent history, with the ordinary Nigerian as the central theme of his campaign.

This, no doubt, was a major campaign issue, because he was considered the most popular candidate ever, when he ran against an incumbent twice. It is also instructive that despite his conviction that he was robbed of victory at different times, he relied on the courts for justice each time he lost instead of rocking the boat.

As president, Buhari has displayed an uncommon commitment to the growth and advancement of the country through programmes and policies targeted at all Nigerians, especially the poorest of the poor.

In doing this, he has fought corruption with an uncommon zeal such that almost N1trillion has so far been recovered from looters by the Economic and Financial Crimes Commission (EFCC), which he strengthened to confront and totally eradicate corruption under his presidency.

This is unlike what obtained under the sixteen years of the Peoples Democratic Party (PDP), which pretended to be fighting anti-corruption war that was only able to recover N2bilion in 16 years, during which Nigeria made so much from oil but refused to save for the rainy day.

But under Buhari, critical infrastructure is being fixed across the country to make life more abundant for Nigerians. Even in the South-east, where the president recorded the least votes, the narrative is fast changing with no few than 70 verifiable on-going and completed projects, funded with tax payers’ money, including the much criticised sukuk bond.

Unlike the previous administrations, this government is investing heavily to connect the entire nation through railways to reduce over-dependence on roads. Even the Lagos-Ibadan expressway over which Afenifere leaders cried to former president Goodluck Jonathan for years is being fixed by the Buhari administration and will soon be completed by Julius Berger and others.

Curiously, the same Afenifere and Ohaneze leaders are unappreciative, but the people do. The good thing is that this president will not be distracted as his covenant is with the ordinary Nigerians, who elected him in 2015 and not the elites. The beauty of it is that he is focused and his impact is been felt across all critical sectors of our economy.

That is the major reason the President is working tirelessly in generating resources from non-oil exports and relies less on petroleum to improve our treasury. At least, for the first time, Nigeria is making good money running into several billions through diversification of the economy.

Though the journey has been tortuous and long, ordinary Nigerians are now direct beneficiaries of their money under the trader moni and other empowerment schemes targeted at the poorest of the poor by Buhari administration.
With 2019 fast approaching, the good news is that President Buhari has not lost touch with his constituency, the ordinary Nigerians, who elected him into office.

This was further reinforced recently by the influential London-based magazine, The Economist, which predicted victory for Buhari in 2019 as it did in 2015. But one point needs to be stressed here, the greatest people in human history are not those, who lived and died working or making money for themselves, rather, they are those who lived and died for a transformed society.

In the word of the late Mohammed Ali, “The rent we owe here on earth is the service we rendered to humanity”.
For these reasons and on the basis of these qualifications, I want to say that when the history of this republic is written, posterity will remember President Muhammadu Buhari for good.

As his family, relations, friends, political associate, groups and organisation locally and overseas celebrate his 76th Birthday. I will remain fervent in my prayer for President Muhammadu Buhari, GCFR. May the benevolent winds of providence continue to swell the sails of his health and happiness beyond the centennial years!