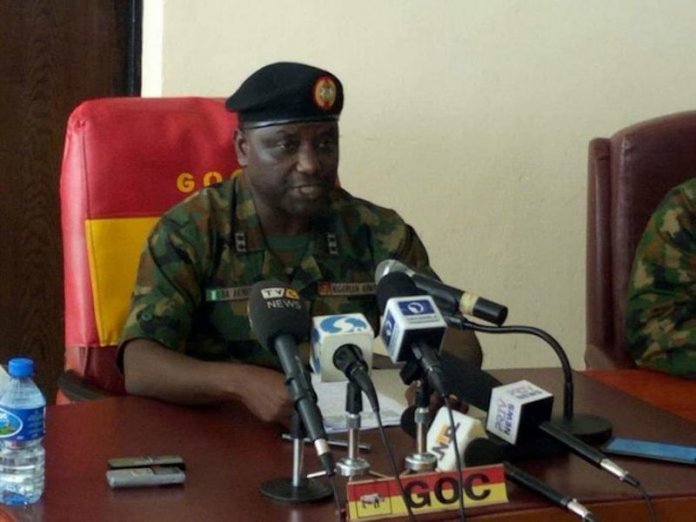 The new Theatre Commander of the Nigerian Army overseeing war efforts in the North-east tagged “Operation Lafiya Dole”, Major General Benson Akinruloye, declared yesterday that the army lost gallant soldiers and equipment to terrorists because of “unseriousness and cowardice” on the part of some soldiers.

The army said 39 soldiers fell when terrorists overran 157 Task Force Battalion, Metele, Borno State, last month but other sources within the theatre of war said over 100 soldiers were killed by the insurgents.

This is coming as Army Headquarters released another batch of postings and appointment of senior officers, including General Officers Commanding (GOCs) and brigade commanders.

Speaking while declaring open an orientation and induction cadre for commanders and staff officers at the Maimalari Cantonment Officers’ Mess, Maiduguri, Akinruloye expressed grief over the “cases of negligence, lackadaisical and cowardly attitudes of some personnel during Boko Haram terrorists offensive actions in the north-east,” adding that such “unprofessional and disgraceful habits led to the death of gallant colleagues while weapons and equipment were carted away by the adversary.”

General Akinroluyo, who said such “unwholesome attitudes must not be allowed to continue,” recalled the days when the Armed Forces of Nigeria received global accolade for combat efficiency outside the shores of Nigeria and urged the newly inducted officers to repeat those glorious battlefield successes in Nigeria.

He further noted that the cadre was the first of its kind in the theatre and that it was aimed to equip the officers with vital information that they would require in planning for effective command and administration in their respective posts.

While urging the officers to take the cadre course very seriously, the commander pointed out that the course for the newly inducted officers was designed to actualise the army chief’s vision to enhance professionalism in the Nigerian Army through training, seminars, management retreats and exercises.

Meanwhile, the Nigerian Army yesterday released another batch of posting and appointments of some of its senior officers. Those affected by the exercise include Major General AA Nani, who is to remain in Army Headquarters Department of Policy and Plans (AHQ DAPP) and appointed Chief of Policy and Plans (Army); Major General MM Mshelia, from Warrant Officers Academy (WOA), Jaji, to Nigerian Army Training Centre (NATRAC) and appointed Commander.