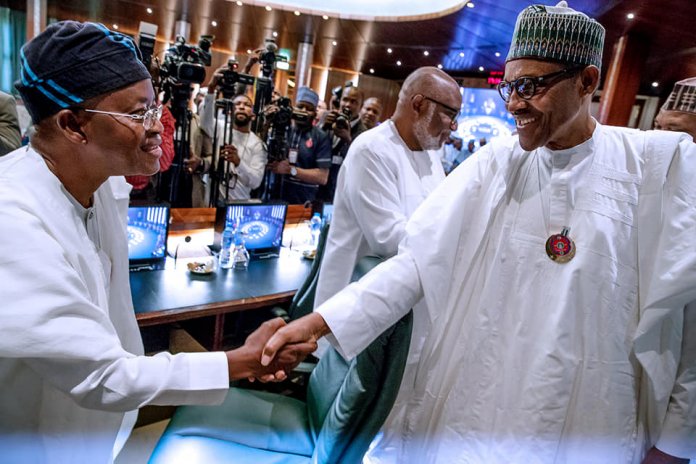 President Muhammadu Buhari has told governors that the Nigerian economy is in bad shape and that Nigerians will need to tighten their belts.

This was disclosed by the chairman of Nigeria Governors’ Forum (NGF), Abdulaziz Yari, Governor of Zamfara State, to State House Correspondents after the governors of the 36 states met with President Buhari in the Council Chambers of the Presidential Villa on Friday.

Rising from the meeting, Yari said President Buhari told the governors that “the economy is in bad shape and that we have to come together, think and rethink on the way forward.”

The meeting of the governors with the President was to find a lasting solution to the unresolved issue of new minimum wage for Nigerian workers after they had met Thursday night to take a position on the matter.

Though he did not reveal what their conclusion was with President Buhari on the new minimum wage, Yari noted that he, ”talked to us in a manner that we have task ahead of us. We should tighten our belts and see how we can put the Nigerian economy in the right direction”.

According to him, the Nigerian leader blamed the previous administrations led by the People’s Democratic Party (PDP) for Nigeria’s state of infrastructure decay despite huge oil revenue.

“He (Buhari) wondered about what happened in the past; that for the 16 years of the now opposition party, the PDP in power and with oil at 2.1 barrels per day at an average of $100, many infrastructure are in bad shape,” Yari said.

The governor said contrary to the president’s initial resolution not to make reference to the decadence that characterised the PDP leadership, Buhari was compelled to bring those issues before Nigerians so that they can decide if it is best to bring the former ruling party back to power.

“He is going to open a vigorous campaign and these are key issues that he is going to raise with Nigerians so that they can weigh their choices,” he added.

He told newsmen that President Buhari was optimistic that All Progressives Congress (APC) candidates seeking re-election, including himself, will win, saying that the President told them ”it is not going to be easy, it will be harder than before”.

He said the state executives expressed appreciation to President Buhari for assisting states with the Paris and London Clubs refunds, which enabled them pay salary arrears to workers and also the bailout funds given to states irrespective of party differences.

“We therefore appreciated what Mr. President has done. Without the president, with our mindset and thinking, it will be very difficult for us to govern, that’s the truth”.