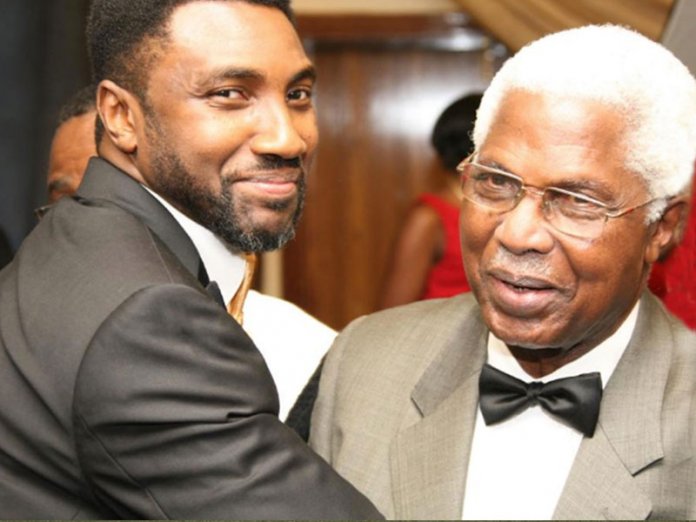 With an incandescent visage, a graceful gait and a sense of modesty, he sits calmly on a sofa in his living room. That he is the son of Nigeria’s first Vice President, Dr Alex Ekwueme, is considered as an appurtenance. In his own world and way, Goodheart Ekwueme, the founder of Revival House of Glory International Church (RHOGIC) is a man of immense intuition, both terrestrial and celestial. Ekwueme, who turns 50 recently, speaks with Funke Olaode about his late father, the role of the church in nation-building and why the politics of bloodbath must come to an end as the country goes to the polls in 2019

With an incandescent visage, a graceful gait and a sense of modesty, he sits calmly on a sofa in his living room. That he is the son of Nigeria’s first Vice President, Dr Alex Ekwueme, is considered as an appurtenance. In his own world and way, Goodheart Ekwueme, the founder of Revival House of Glory International Church (RHOGIC) is a man of immense intuition, both terrestrial and celestial. He was barely 11 years old when his late father and an architect of repute became Nigeria’s number two citizen in 1979. But rather than indulge himself, he set out to be his own man.

After his secondary education at King’s College, Lagos, he went to the Ahmadu Bello University, Zaria, where he studied accountancy. At the insistence of his father, he sat and passed the Institute of Chartered Accountants of Nigeria (ICAN) examinations. Although doing well, he knew his calling was to go into the full-time ministry as a pastor. Again, going into Pentecostalism was a challenge for his father who would have preferred him to be an Anglican priest. But the young Ekwueme followed his heart and his father gave his consent before he passed away.

With a successful father who was one of the foremost architects in Nigeria and having decided to embrace spiritual calling, he had to work hard to be successful. Today, Ekwueme, the lead pastor of RHOGIC is one of the most influential pastors in Nigeria. Without a doubt, his life is a lesson in hard work and perseverance.
Ekwueme does not know how to indulge in frivolities but December 3, this year, was different. It was the day he turned 50. The day did not go unnoticed as he was celebrated.

Looking dapper in a tuxedo with a silver beard adorning his chin, he reflected on his life at 50, saying: ”Well, the sound of 50, the sound of jubilee makes me feel hmmm but it is really here. I am reminded when we were young in our teenage days and we saw those uncles who came to the house; we will be referring to them as, this ‘old uncle’. God forgive my ignorance then. Today at 50, I don’t feel like those ‘old uncles’ I once referred to as a teenager. I really feel like a 25- or 30-year-old in my mind and thinking and I trust God I will feel this way for a long time to come. They say age is but a number, it is what you make out of it that it will be for you. There are many things that begin to happen to you emotionally, psychologically when you come to an age as this.

“You think more deeply, the reality that you probably have spent more of your life than what you have left. So I am thinking you can’t waste time any more, I am thinking posterity, I’m thinking legacy but I am also thinking about eternity more consciously than before. So these are thoughts that are beginning to settle more in my heart. And one strong thing the Lord is challenging me at this point in time now is to begin to pray for and about the wisdom of God.”

It has been over a year since his father passed away, Ekwueme still misses him. “To have such a towering figure of a father to be alive, you can go in and out, do battle and come back, he is there. I miss his amazing wisdom. He was evidently a man of knowledge in various topics and subjects. There was hardly anything you would talk about that he didn’t have something meaningful to say and contribute. He had great breadth of mind and was a very deep thinker. I miss his charm and warmth. He loved children, his family; he had a way of remembering all of us in various ways, birthdays, etc. Oh boy! My birthday comes down the road, typically every year I expect my father to call me personally, the first thing he will do is to sing the typical happy birthday song to me in his rich baritone voice. So that is something, that I have not got once now during my last birthday last year December 3, shortly after he passed away on November 19, 2017. This would be the second year that I won’t hear him say happy birthday to me,” he stated.

Ekwueme’s spiritual trajectory began over 19 years ago when joined the House on the Rock under the tutelage of its Senior Pastor, Paul Adefarasin. For 17 years, he devoted his time to his spiritual growth until two years ago when he moved to another ministry. He explained his switch.

“Let me interject, somebody once said and I agree that you don’t have to start a ministry to be in ministry. I honestly don’t see myself to ever ‘own’ a ministry or a church. I am just glad to be called by God to serve Him in ministry. It is God’s prerogative as the ‘ultimate employer’ of His ministers to post or re-post them to the duty post of His choice. That was my case! As I mentioned earlier, the Lord caught me early and when he did it wasn’t a time to be cold or lukewarm for the Lord, I threw myself right at it, I began to read my Bible, pray, evangelised and within a short time I knew I was right inside God’s will.

“At the Ahmadu Bello University, I was a campus fellowship pastor. The Lord graciously used me to pioneer a fellowship and all kinds of things on campus. Many years later the paths of destiny between me and the founder of House on The Rock Churches would cross by divine providence in 1995 in the city of Lagos, where He led me to join and serve the church. It was from there that I was sent to Abuja, precisely in 1999, to minister. I served there for 17 years to the best of my ability. It was from that ‘spiritual duty post’ that God would re-assign me to yet another ‘spiritual duty post’ otherwise called Revival House of Glory International Church (RHOGIC) – a young but growing ministry,” the RHOGIC pastor narrated.

His father chose politics; Ekwueme believes the pulpit is his calling.
Sharing his view on the temporal and the spiritual, he said: “As a clergy I encourage as many people I know to go into politics. I think the more good men in politics, the merrier. So I encourage people with good values, good intentions not to go there for a job, not even as a career but go there to serve. Right now, I don’t see myself going into an elective office but I am not God. I have no taste or desire for it to be honest. But I have also learnt in my walk with God to never say ‘never’. I let Him show me what’s next to do.”

Although there is uncertainty on his future in politics but Ekwueme is still of the opinion that pastors still have a lot of role to play in nation building. “Pastors have a role to play in nation-building. They form a great part of the conscience of the nation. Recently, I preached a message, ‘silence no more’ and I essentially took my text from the story of Esther, and how she became comfortable in the palace, a woman who was orphaned, raised by an uncle, Mordecai, suddenly providence showed up as a queen. Mordecai said, hey girl don’t you forget you are still a Jew; don’t get too comfortable in the Palace. I was challenging myself as a cleric that you cannot continue to stay in the place of neutrality. We must be willing to be vocal, while being vocal, know how to speak appropriately with respect and cordiality to those in power and authority,” Ekwueme added.

And as Nigeria heads to 2019 general elections, the pastor said: “I pray that this difficult season that we have been for the past few years will give way, supernaturally, miraculously to a far better government and governance for us as a people. I see hunger in the face of Nigerians, I see tears, I see pain, I see question marks written all over many faces, chaos, and confusion and as a cleric it brings me a lot of concern, a lot of hurt. Nigeria and Nigerians are deserving of a better system of governance and rule. I pray such better system of governance and rule will come into reality.”

Ekwueme as a spiritual father to many folks is also a doting father to his family. How does the man of God balance his spiritual life with the home front?
He explained: “It’s a balancing act. I am married to a wonderful woman and we are blessed with four wonderful children, three boys and a girl between the ages of eight and 18. Ministry can take a toll on family and other areas of life if great caution is not given. As such one continues to make deliberate efforts to balance out things as much as it’s possible. They are beautiful, upright and godly children being trained in the ways of the Lord. They have not given us any trouble in any regard; they are of no concern whatsoever. We only trust God to take them to do far more that He has used us parents to do in our own life time.”

Life they say is not a bed of roses. And like human, does Ekwueme have any regrets in life? “I can’t say there are regrets because again walking with God I have learnt to carry myself as one who is imperfect in the hands of a perfect master, who also has the ability, willingness and the love to mould, shape, break you into what He desires for you to be. I am very grateful that I have enjoyed tremendous progress in both my personal and spiritual life,” Ekwueme added.