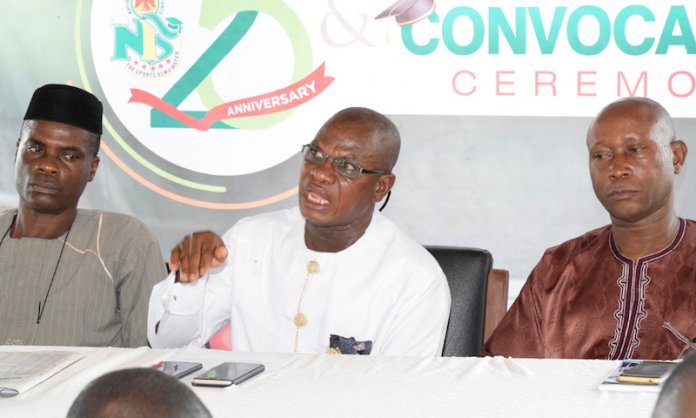 The National Institute for Sports (NIS), a leading sports training institution in the country is set to celebrate its 25th anniversary and the maiden convocation ceremony scheduled to hold on January 17th, 2019.

The Director General of the Institution, Dr. Kingdom Chukwudi Eke, disclosed at a media session yesterday.

He said the elaborate Programme will accommodate all the12 sets that had graduated from the institution since its establishment in 1992 when it was fully upgraded to a full-fledged parastatal.

He said over 1,500 students that have graduated from the institution will be part of the ceremony although most of them have been using their certificates over the years.

“The anniversary is a unique one and we have sent invitations out to all the former students who had completed their respective programme from this institution to celebrate together with the present crop of graduates.

“To be a first class institute transforming Nigeria and sustaining it as a world leader in sports was the vision of the institution must be protected at all time and this explains why the 25 anniversary must be well celebrated,” he affirmed.

Some of the plans of the Institute include; anniversary lecture/gala and dinner, NIS awards of sporting excellence, convocation/lecture and investiture of honorary fellows of the institute as well as recognition awards for sports journalism.

The Director General further explained that the institute had over the years remained committed to delivering on its statutory mandate as it has produced over 15,000 manpower in sports who have continued to place Nigeria on the global sports map, winning laurels.

“NIS graduates are prominently engaged in services at national, states and local government levels as well as at club levels and in patriotic effort to take stock and celebrate the past 25 years, we have put together a number of very exciting programmes and events to mark this epoch and document for posterity,” he explained.

He said the reason behind the elaborate programme is also aimed at repositioning and rebranding NIS.