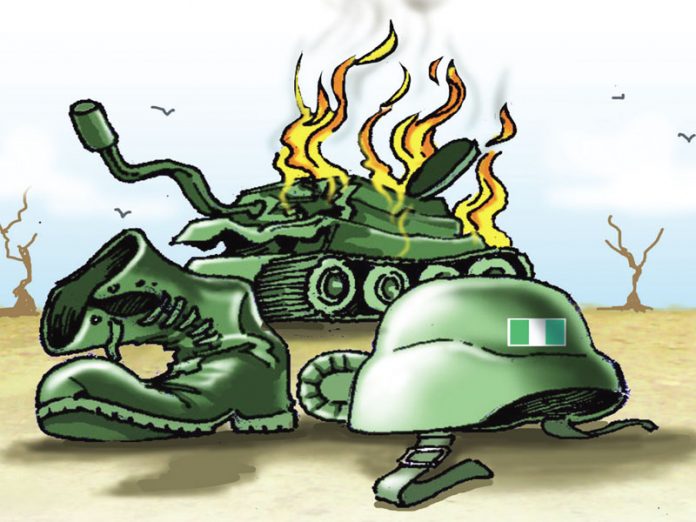 Boko Haram and ISWA may have won this battle, we must win the war!

While the actual number of soldiers and locals killed in last week’s surprise attack on the 157 Task Force Battalion at Metele, Borno State is still being tallied, what is not in doubt is that the Boko Haram insurgents backed by the war-hardened fighters of the Islamic State West Africa ( ISWA) bloodied our armed forces and inflicted serious damage on our country. While the Battalion commander, his deputy and some senior officers fell on their swords along with scores of soldiers, it is confounding that the military would still be talking about Boko Haram being ‘highly degraded’. The attack has not only exposed our vulnerability as a nation, it has underscored the fact that we are dealing with a far bigger security threat than the authorities can comprehend.

We mourn with the families of the victims as any attack on them is an attack on us all. And we urge the Federal Government not to abandon them at this most difficult period as it is often the case. Given the audacity of the attack and the damage inflicted on our army, it is very telling of the capacity and the boldness that Boko Haram, ISWA and their terror affiliates have mustered, especially in recent weeks. Indeed, this particular attack was clearly carefully planned with the intention of sending some sinister message about the capacity of the insurgents whose operatives have been posting videos and all manner of stories in the social media.

Meanwhile, in reporting the tragedy, we agree with the military that there is need for the media to be more circumspect so as not to feed the propaganda machine of the insurgents and further dampen the morale of our troops and create panic and fear in the populace. As we have also repeatedly pointed out, it is important for all the critical stakeholders in the country to look beyond politics at a time like this and render whatever assistance they can in the bid to put an end to the current carnage, which clearly puts our country at risk. But we should also not live in denial about certain facts: as things stand today, the intelligence gathering machinery of the terrorists seems to be good; their men also appear to be motivated and there are clear indications that they boast of good firepower.

Instead of moaning, lamentations and blame games, this is the time to stand with the armed forces of the Federal Republic of Nigeria: this is the time to put our house in order. One of the major challenges facing the military is the lack of public trust. This has led to a situation in which Nigerians who live in the affected communities refuse to volunteer information, thereby denying vital intelligence needed to effectively carry out their mandate of ridding our society of these violent criminals. The military must take every step to rebuild trust and confidence in the theatre of conflict and end the policy of appeasement and negotiation with the terrorists which has now become counter-productive. In the past one year, there have been reports of hush money paid to the terrorists for the release of captives. The flip side to such arrangement is that once terrorists and their sponsors know they can easily arm-twist a government, then they have a ready source of money with which to reinvest in new arms supplies lines for their ruinous escapades. In societies where governments negotiate and pay ransom to criminal cartels, especially those hiding under religion, criminality and terrorism become self-perpetuating.

If we must win the war against the insurgency, President Muhammadu Buhari has a decision to make because all is still not well with the military. While the rank and file complains about the lack of weapons with which to prosecute the war, many of the senior military officers are also complaining about lack of progression because those who ought to have retired from service are being needlessly kept on their jobs leading to low morale within the leadership. This is the time to revamp and replace the command, control and war strategy of the armed forces.

A new war strategy must begin with the executive, legislature and judicial branches of the Federal Government. The Judiciary must bring, and be seen to bring, justice to convicted insurgents as there is confusion as to the status of arrested and convicted terrorists. The Legislative Branch of the National Assembly must urgently meet to appropriate new funds for the armed forces and oversight the procurement process from what ever sources – given that many countries who sell us arms come with strings attached. If the terrorists can access lethal weapons we should do better. The President and Commander -in-Chief must now lead a bi-partisan renewed effort to design and implement new war strategies. First, street fights with the Islamic Movement of Nigeria ( IMN) must stop, beginning with freedom for their leader Ibrahim el-Zazaky so as to concentrate the armed forces on the fight against Boko Haram and ISWA. Then we must fiercely arm the Armed Forces – Army, Air force and Navy for the war ahead. An amphibious Naval Base must be stationed in Lake Chad and a solid Air Force must be given wings and latest technologies to own the skies over the North East. Then the Army can hold the ground. All of these will not be complete without a new Police Force led by what is called the Civilian JTF in a new community policing model. All said, we have been bloodied and bruised, by the battle of Metele, but this is the call to arms and to fight back in a war most brutal to restore our dignity, our integrity and our fatherland.