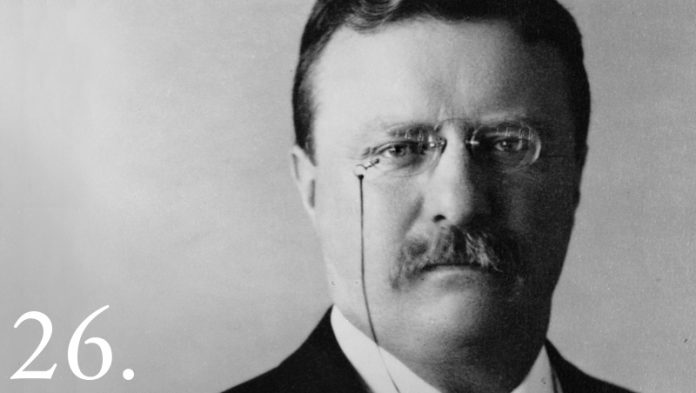 In the immortal words of Theodore Roosevelt, the 26th President of the United States of America, “the stream will not permanently rise higher than the main source and the main source of national power and national greatness is found in the average citizenship of a nation. Therefore, it behoves us to do our best to see that the standard of the average citizen is kept high and the average cannot be kept high unless the standard of the leaders is very much higher”.

The statement rings true, and without a shred of doubt, embodies the first order differentiating factor why nations fail or succeed. This is true for corporate entities as it is for sovereigns.

Daron Acemoglu and James Robinson did argue elegantly, in their book titled “Why Nations Fail”, on the role of inclusive institutions in bringing about sustainable growth. Implicit in the “institution theory” by Acemoglu and Robinson lies the central role of leadership because, in the final analysis, both inclusive and extractive institutions are direct consequences of leadership – this much is axiomatic in the Latin truism that says nemo dat quod non habet (you simply cannot give what you don’t have).

Leadership is about ideas (bold ideas, I must say), ability to make difficult choices for the common good, penetrating vision, strategic acuity with execution capacity, developmental mindset and a global worldview. Sadly, our sense of achievement in this part of the world has been thoroughly subverted to the extent that production of a few bags of rice that cannot feed internal refuges in an IDP camp is touted as rice revolution and every conceivable project as ridiculous as 10-feet water borehole (of course, usually executed at colossal costs that can fund several space missions in other countries), is commissioned with so much fanfare and worn as a badge of honour for (re)election.

In saner climes where quality of ideas matter, by now the queue behind new breed of presidential aspirants in Nigeria like Professor Moghalu, Dr Obadiah Mailafia, Mrs. Oby Ezekwesili, Fela Durotoye, Omoyele Sowore should be the farthest. And where are the likes of Sanusi Lamido and Professor Charles Soludo? Where quality of ideas matter, shaku-shaku dance steps at campaign rallies will never pass as a proxy for robust policy debates – even Omoluabi is in shaku-shaku dance rehearsal mode, I heard. As usual, as the campaign season begins, the two major political parties will again serenade us with wild gyrations and incoherent vituperations targeted at opponents (dead or alive) with little or no focus on policy issues in scenes reminiscent of rancorous wresting contests in ancient Rome. We can do better than this.

That there is a crying need for root and branch reform of the Nigerian economy is abundantly clear with over 70 million trapped in grinding poverty. Therefore, the minimum we expect from current and aspiring political leaders are concrete steps on how to resuscitate the comatose economy, bridge the huge level of infrastructure gap, rescue the educational system from total collapse, reverse the cyclical fiscal deterioration and avoid fiscal expansions that have little or no bearing with the state of infrastructure and social-economic well-being.

Pray, how can any serious country lay claim to economic transformation when it expends over one hundred percent of public revenue on recurrent expenditure and total allocation by MDAs for newspapers in the annual ritual called budget rivals the entire revenue from sale of newspapers by local media organisations (does this make sense to you? I leave it for you to figure out).
Let’s be clear, this is not to suggest that political leaders must be world-renowned economic experts. However, such a person must be sufficiently equipped with the knowledge of the workings of a modern economy, understands the primacy of structural transformation and the use of appropriate policy choices to cultivate and promote the kind of complexity that creates a virile economy, guarantees long term sustainability with a view to inclusive prosperity. In sum, the capacity to conceptualize the future economy, where key developmental indicators in Nigeria are consistent with what obtains in other prosperous nations, is a sine qua non.

In this age, no serious country dwells in the triumphalism of exportation of a few tubers of yam as a mark of economic diversification, assuming such claim is even true. Today’s knowledge economy does not lend itself to the tokenism of commodity-to-commodity diversification. Lifting millions of youths from the poverty trap requires much more than simply focusing on low value products. Agriculture in critical in providing food sufficiency and security. Indeed, an economy that cannot substantially feed itself has little capacity for external competitiveness but to compete on a global scale and to provide the kind of jobs that will push unemployment rate to lower digit region requires a much more complex economy. The sort of rapid economic growth and steep reduction in unemployment witnessed in developed and emerging economies has consistently followed a discernable path and that is the path of structural economic complexity.

Economic transformation is driven by policies and policies must bear relevance to the existential realities of an economy. The quest for structural transformation and economic growth requires new perspectives etched in the understanding that our economy needs growth models that underpin the peculiarities of our environment and national interest as Professor Kingsley Moghalu rightly concludes in his book “Emerging Africa: How the Global Economy’s Last Frontier Can Prosper and Matter”. Crucially, we sometimes need to interrogate and dispel age long economic orthodoxies or where necessary, reframe it.

This again brings into focus the near fixation on Mundell-Fleming as the reference model and proximate policy tool for exchange rate management and macroeconomic stability in Nigeria by some economic experts, intellectuals and opinion merchants each time there is fiscal crisis in Nigeria always as a result of oil price slump. For the uninitiated, the classical Mundell-Fleming model suggests that weak domestic currency encourages investment and spurs export and therefore brings about macroeconomic stability. It is true that the model has some validity, albeit with major drawbacks, one of which is its lack of general applicability.

Hence, allusion to Mundell-Fleming without corresponding reference to Marshall-Lerner condition either smacks of intellectual dishonesty or is a conscious propagation of a single story with its inherent danger (apologies to Chimamanda Adichie). Marshall-Lerner condition essentially states that for weak domestic currency to spur investment and export, the sum of the elasticities of demand for imports and exports must be greater than one. Clearly, in the case of most developing economies, import and export demands are generally inelastic due to underlying structural constraints and this does not require complex economic models to appreciate.

Empirical studies have shown that while firms in developed economies including some parts of Asia increase investment when the domestic currency weakens, the reverse is the case for firms operating in countries with low degree of structural complexity. It has further been established that in economies where capital goods are mostly imported, a stronger real exchange rate reduces investment costs for domestic firms. Therefore, devaluation-export linkage assumption is not likely to hold (in fact does not hold) particularly for structurally weak economies. It may even worsen the fiscal condition of an economy and accentuate macroeconomic instability.

Meanwhile, as part of the economic diversification debate, Mr. Omoyele Sowore, one of the presidential aspirants in the forthcoming elections, recently stirred the hornet’s nest when he launched “cannabis for export” campaign in view of its forex potentials. Though illegal, cannabis is cultivated in some southern states in Nigeria. It is popularly known in the local parlance as igbo, Indian hemp, kaya, wee-wee, abana, morocco, ganja, grass, shunk, lala amongst other cryptic appellations. According to online sources, Nigeria occupies the eight position on the log of highest cannabis consuming countries in the world. Perhaps unbeknownst to Sowore, Nigeria has been running a cannabis economy for decades – crude oil is the cannabis.

Cannabis has the essential qualities of crude: the Indica and Sativa strains have tranquilisng and energising effect respectively – does this remind you of the high and low of oil price and the impact on the economy? We have had enough of this cannabis economy. There is no righteous reason why we are stuck in the past when other countries at the same developmental stage with Nigeria at the time of independence have literarily migrated to space. The gods are not to blame.

Therefore, while all options for economic diversification should be explored, it is high time we moved beyond commodities and away from “crude economy” in our policy discussions. What I required is a robust and an integrated strategy that addresses funding of R&D, infrastructure, healthcare, public service reform, institutional capacity building and national cohesion with education as the bedrock all geared towards building a complex and virile economy. Without these, the economy will continue to hover on the point of crisis. Therein lies the role and required standard of leadership at both national and state levels that Theodore Roosevelt talked about.
Glenn, a financial/tax consultant and an ex-banker, plays golf.