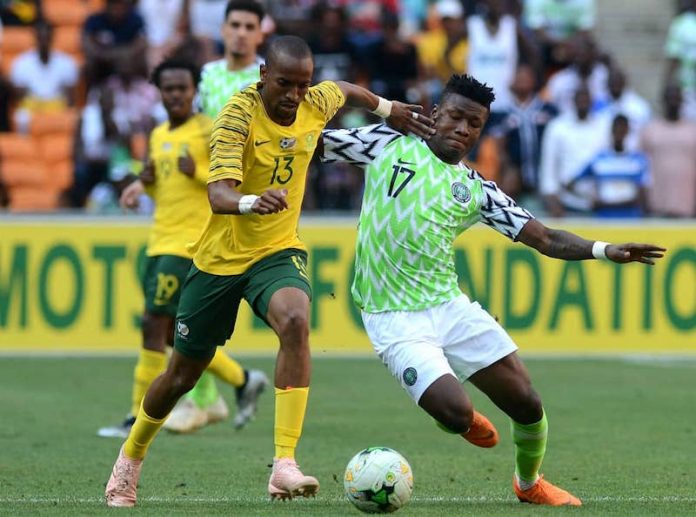 Nigeria and Uganda go toe-to-toe again in an international friendly expected to attract a huge crowd to the Stephen Keshi Stadium in Asaba this evening.

Both countries are celebrating qualification for the 2019 Africa Cup of Nations following Matchday 5 games over the weekend. The Super Eagles were held to a 1-1 draw by South Africa’s Bafana Bafana at the FNB Stadium in Johannesburg to be sure of a ticket from Group E ahead of the final matchday, while the Cranes pipped Cape Verde 1-0 in Kampala to be sure of finishing as Group L winners.

A holiday atmosphere would most certainly have been guaranteed, but Nigerians have learnt not to take matches against Uganda lightly since a certain Phillip Omondi scored a brace to stop the Eagles from reaching the Final of the Africa Cup of Nations in Ghana 40 years ago.

Nigeria has avenged that defeat in subsequent qualifying matches for major competitions, but they still remember losing 1-2 to the Cranes in a 2008 Africa Cup of Nations qualifier in Kampala that would have been disastrous, had the Eagles not won the first encounter 1-0 in Abeokuta. Nwankwo Kanu scored a late goal that day to get the three points off the visitors in a tough duel.

The Cranes also remember beating the Super Eagles 1-0 in a friendly in Uyo in March 2015 that marked goalkeeper Vincent Enyeama’s 100th international match. Farouk Miya scored with a powerful header.

The above account means both teams will come with furrowed brows and grit determination to the Stephen Keshi Stadium, an arena named in memory of Nigeria’s longest –serving captain and AFCON –winning coach, who was in charge of the Super Eagles when they lost that friendly in Uyo 44 months ago.

Uganda’s 31-man delegation flew into Lagos yesterday and is scheduled to fly to Asaba this morning.

Defender Leon Balogun, injured in the 1-1 draw with South Africa in Johannesburg on Saturday, has been excused from Tuesday’s clash, otherwise Nigeria’s 2019 AFCON ticket –winning squad is intact.

Officials have confirmed that Governor Ifeanyi Arthur Okowa of Delta State will be the special guest, to be joined by members of the Delta State Executive Council. President of the Nigeria Football Federation, Mr. Amaju Pinnick will also be there alongside members of the NFF Executive Committee and Management.

The NFF on Monday named a former President of the Federation, Brigadier –General Dominic Oneya as match commissioner for Tuesday’s game. Oneya was NFF President between January 2000 and October 2002, and is a former member of the CAF Organizing Committee for the AFCON.

Tuesday’s match will kick off at 4.30pm, with fans guaranteed a huge bonus as they will also have the opportunity of watching the Nigeria Super Cup 2018 between Lobi Stars of Makurdi and Rangers International of Enugu at the same venue, starting from 7pm.