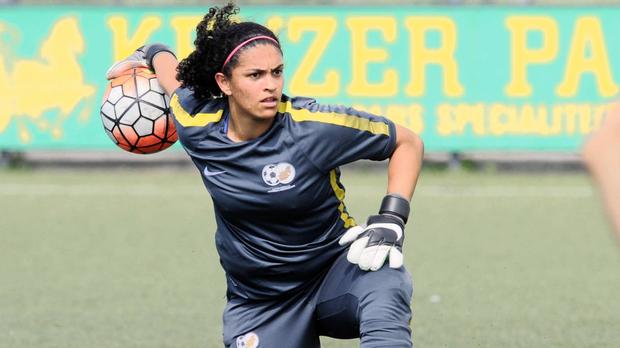 Banyana Banyana goalkeeper Kaylin Swart believes her team can be victorious when they take on arch-rivals Nigeria in their opening Group B match at the Africa Women’s Cup of Nations, at Cape Coast, in Ghana on Sunday.

Banyana have been drawn into what many call the ‘group of death’, which besides South Africa and Nigeria, also includes quality opposition in Equatorial Guinea and Zambia.

“Nigeria has always been one of our rivals and we know what to expect from them, but our coaches will hopefully put some puzzles together before Sunday,” said Swart, who won her first Banyana cap earlier this year against Sweden.“Whichever way we look at it, it’s going to be a battle.”

Referring to the hot and humid conditions in the Cape Coast, Swart said that the heat factor will be the same for both teams.

“To say it’s hot here is a bit of an understatement, but we can either sit here and complain, or go out there and play our socks off.”

Referring to the warm-up match earlier this week where Banyana went down 1-0 to hosts Ghana, Swart said: “Ghana are one of the top four nations at the tournament.

“Defensively we were sound, except for the one mistake from a corner kick that we made. We have one or two things to work on but we will be ready.”

Swart and striker Jermaine Seoposenwe were part of the SA side that took part in the World Cup Women’s U-17 tournament in 2010 in Trinidad and Tobago.

However, the goalkeeper was quick to point out that the World Cup at any level is quite different to the Olympics where Banyana played in 2012 and 2016.

“Going to the Olympics is one thing and going to the World Cup is different, but if we take things one step at a time, we will get there,” said Swart.

Swart and her colleagues can be excused if the nerves are fluttering so close to the start of the tournament.

“Nerves show that we are human, and I would not say that it is a bad thing,” added the goalkeeper.

Following the Nigeria match, Banyana will face Equatorial Guinea on November 21, before wrapping up their group commitments against Zambia three days later.