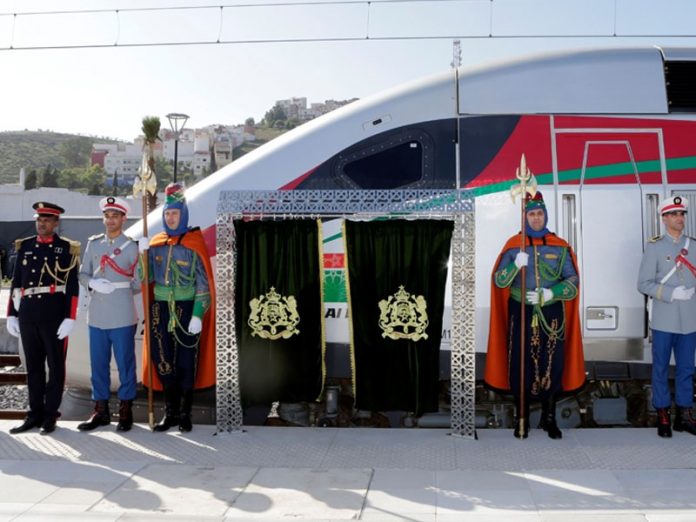 Morocco Thursday inaugurated Africa’s fastest train. The train will halve travelling time between the commercial and industrial hubs of Casablanca and Tangier.

King Mohammed VI and French President Emmanuel Macron boarded the train for the inaugural trip from Tangier to the capital Rabat.

It will more than halve the 200km (124 miles) Casablanca-Tangier journey to around two hours,

The train is about twice as fast as South Africa’s high-speed Gautrain linking Johannesburg’s international airport to the city’s financial district Sandton.

Morocco bought 12 double-decker high-speed trains from the French group Alstom to be operated by the state-owned railway ONCF, which expects six million passengers to use the new service annually.

The king and the French president on Thursday boarded the train at Tangier after they were handed tickets by the Director General of Morocco’s National Railway Office, Mohamed Rabie Khlie, according to state news agency MAP.

Last year, Jean-Yves Le Drian, France’s foreign minister, called the railway “the fastest train on the African continent” during a visit to Morocco to sign a loan deal between the ONCF and the French Development Agency.

Authorities have said the project is part of a larger rail plan aimed at upgrading Morocco’s transportation system and boosting the economy.

However, the new line has not been without its controversies.

The high cost has drawn criticism, with some saying the project was not a priority and the money would have been better spent on health and education.

Critics also say it has flagged disparities in spending between the north and south of the country – vast southern regions and major cities such as Agadir are without a basic rail service.

A derailment in October near Kenitra, 15km north of Rabat, which killed seven people and injured 125 others, sparked further criticism and calls for increased funding to improve safety and infrastructure as well as the punctuality of basic railway services.(NAN)