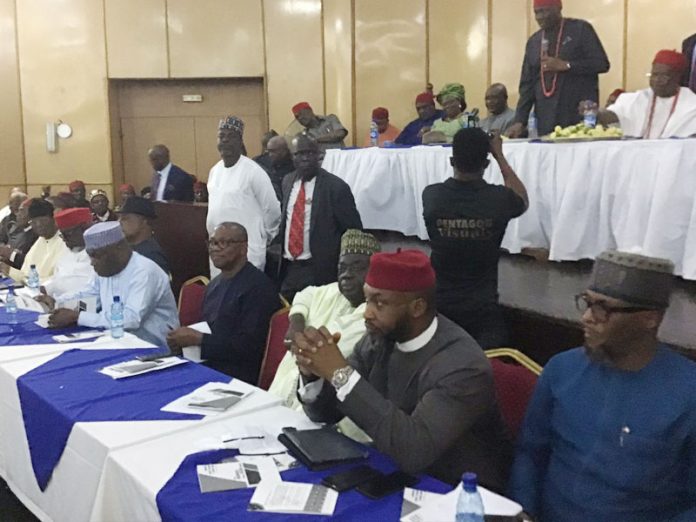 The presidential candidate of the People’s Democratic Party (PDP) in the 2019 general elections, Alhaji Atiku Abubakar, says his commitment is to fix the ailing Nigerian economy.

Abubakar said this on Wednesday during a meeting with Igbo leaders in Enugu.

He said that he was worried about developments in the country as well as the future of the country and the legacies that would be left for generations unborn.

“My commitment is to fix this country. I think of the future this country will have, if I do not struggle to fix it.

“Our economy must be fixed and you can trust me and Mr Peter Obi to do it,” he said.

The presidential candidate said that he was worried about the state of infrastructure in the South East, especially the condition of the Akanu Ibiam International Airport in Enugu.

“I am always scared coming to Enugu because of the state of the runway of the airport. What does it take to fix the runway? A local government council can fix it if they are made viable,” he said.

Abubakar said that the issue of restructuring the country was already settled, adding that he would not be talking about it.

“I am a product of a restructured Nigeria. So it is a settled issue,” he said.

The former vice president said that the comments by some chieftains of the All Progressives Congress (APC) in favour of restructuring and state police were belated and deceitful.

“Article 7 (2) of the Constitution of the APC says that the party believes in restructuring and state police but what have they done about this?

“We need to mobilise ourselves and vote for a ticket that will restructure Nigeria,” he said.

Earlier, the President General of Ohaneze Ndigbo, Chief Nnia Nwodo decried the state of infrastructure in the zone.

Nwodo said that the South East had not been carried along in the scheme of things in the country, adding that appointments had been lopsided.

He said that the state of infrastructure at the Akanu Ibiam International Airport was worrisome.

Also speaking, President of the Senate, Dr Bukola Saraki, said that the South East was very strategic to the economic growth of the country.

Saraki appealed to the people of the zone to take away their fears and support the candidate of the PDP.

“The South East represents the assets of the country because we need entrepreneurs and hard work to grow our economy.

“If this economy will grow, it must start from the South East. This is your election because Atiku wants to unite the country,” Saraki said.

The News Agency of Nigeria (NAN) reports that the meeting was attended by chieftains of the PDP across the zone.

NAN reports that the meeting was preceded by a nonpartisan summit convened by elders, traditional and religious leaders tagged ‘Ndigbo 2019 and Beyond Summit’.

A communiqué emanating from the summit and read by Mr Olisa Agbakoba states that the people of the zone identified with the Atiku/Obi ticket on the restructuring agenda. NAN