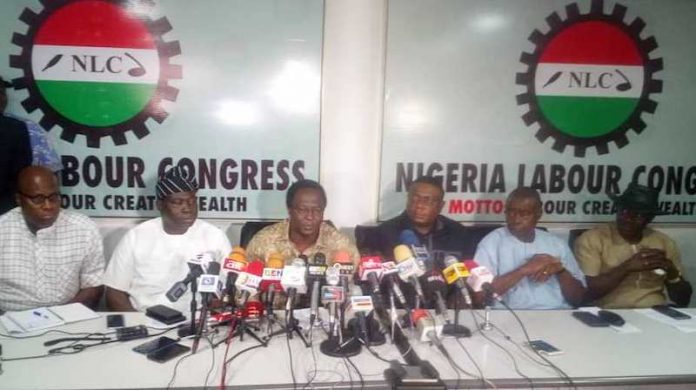 •Tripartite committee report signed
•To be submitted to Buhari today

There was relief yesterday as a midnight agreement between labour and the federal government on the dispute over minimum wage for workers averted a nationwide strike that was scheduled to commence today.

The agreement, which would see the nation’s workers receive a minimum pay cheque of N30,000, was reached among labour, Organised Private Sector (OPS) and the federal government after a 12-hour meeting of the National Minimum Wage Tripartite Committee that was composed to resolve the dispute.

The Chairman of the committee, Mrs. Amal Pepple, said at the end of the meeting at the Office of the Secretary to the Government of the Federation, that the report, which was signed by all the parties, would be submitted to President Muhammadu Buhari today by 4.15 p.m.

After receiving the document, the president will address the nation and unveil a new national minimum wage.
The President of Nigerian Labour Congress (NLC), Mr. Ayuba Wabba, thereafter announced the suspension of the strike following the landmark agreement with federal government.
“Having reached this position, and also the fact that the assignment has been concluded, the organised labour has decided that the proposed industrial action is hereby suspended. As the chairman has said, mutual agreement has been reached, and clearly having reached this agreement, we like to appreciate the role the private sector has played,” Wabba said.

The negotiations began about 11a.m. yesterday.
The Secretary to the Government of the Federation (SGF), Mr. Boss Mustapha, thanked the negotiating team for doing a wonderful job of working on the processes of introducing a new minimum wage for the country, describing it as a long journey that began in November 2017.
Mustapha said Buhari had accepted to receive the report today at the Presidential Villa.

He acknowledged the work of the committee for working assiduously in the past 12 months, saying the implementation of new salary structure will enhance the status of workers and ensure they receive the commensurate salary they deserve.
There had been palpable anxiety yesterday as the horse trading went on all day, with many Nigerians stockpiling foodstuffs and making arrangements to tackle the anticipated effects of the scheduled strike.

The Nigerian economy was estimated to lose over N1 billion daily if the nationwide strike had commenced today.
Analysts, including professor of Economics, Akpan Ekpo, also the director-general of West African Institute for Financial Economic Management, Lagos, who spoke to THISDAY yesterday, had warned that unless the strike was prevented, the disruption to public and private economic activities would cost the nation dearly.
Obviously aware of this dire consequence, the federal government had rallied to avert the strike by convening the Tripartite Committee.
At the end of seven hours of discussions, the meeting broke around 8pm for the government team to consult with the president and returned by 9.30p.m. to continue the talks.

During the break, Pepple had told reporters at the Office of the Secretary to the Government of the Federation (OSGF) venue of the meeting, that both labour and government had held on to their mutually exclusive figures of N30,000 and N24,000 respectively and suggested that the president might be advised to submit both figures to the National Assembly for resolution.
With the prospect of bitter consequences for the economy that is at the precipice of recession, the president had pleaded with labour to shelve the action, saying the workers should give him the benefit of the doubt with regards to the state of the economy he inherited in 2015.

He said they should consider what he was doing with fewer resources to put the economy in the right shape, assuring Nigerians that his administration would sustain massive investments to upgrade and develop the country’s transport and power infrastructure.
His media adviser, Mr. Femi Adesina, in a statement, said Buhari made the remark when he received members of the Association of Retired Career Ambassadors of Nigeria (ARCAN) led by Ambassador Oladapo Fafowora.

Adesina said the president told the retired ambassadors that Nigerians would never forget the ‘‘lost opportunity between 1999 and 2015,’’ when the nation had huge resources at its disposal.
He quoted him as saying, “There is no part of the country I haven’t been to, having attempted to be president four times.
”I know the condition of our roads. The rails were literally killed; there was no power despite the admittance of some previous leadership that they spent $16 billion on the sector.

”Today, we are getting our priorities right and we believe that of the three fundamental issues we campaigned on – security, the economy and fighting corruption-, we have remained very relevant and Nigerians believe we have achieved something.”
Buhari also used the occasion to appreciate the People’s Republic of China for financing some of the rail and power projects in the country through concessionary loans.
”I will do my best to see that where there are possibilities of making a quick improvement on infrastructure, we will do it,” he said.
Buhari had been given a helping hand by the presidential candidate of the Peoples Democratic Party (PDP), Alhaji Atiku Abubakar; President of the Senate Bukola Saraki and Oba Rilwan Akiolu of Lagos, among others, who asked labour and government to find a middle ground to avert the strike.

Atiku, also a former vice president of Nigeria, while supporting workers’ quest for better wages had, however, implored the labour unions to reconsider their stance on an industrial strike action, advising both sides to go back to the negotiating table and reach an agreement.
In a statement yesterday by his media aide, Mr. Paul Ibe, he also urged both organised labour and federal government to exercise restraint and avoid creating situations that could plunge the nation into deeper crises.
According to him, “Our economy is already on its knees and escalation of this crisis into full blown industrial strike action may have dire consequences for our nation.”

Senate President Saraki also appealed to labour to shelve its planned nationwide strike and enjoined both labour and government to allow for more dialogue with a view to reaching an agreement on the contentious issue.
Saraki, in a statement yesterday by his media adviser, Alhaji Yusuph Olaniyonu, urged both labour and government to demonstrate sensitivity and concern for the plight of ordinary Nigerians, who are already battling with the harsh economic conditions in the country.

He expressed appreciation for the patience displayed by the labour leaders as he noted that the new minimum wage issue could have been resolved long before now.
“My Appeal is for the two sides to immediately move fast, shift from their extreme positions and create a new middle ground in the negotiations for the new minimum wage,” he said, adding, “The shift in positions can be done even before the period of the commencement of the proposed strike action so that we do not further create tension within the economy.”

Oba Akiolu also sent a passionate plea to labour to shelve the nationwide strike.
The King in a special statement yesterday appealed for restraint so as not to compound the sufferings of ordinary citizens of the country.
Akiolu, who is the permanent chairman of the Lagos State Council of Obas and Chiefs, made the appeal from his London home where he’s currently holidaying.
According to him, innocent traders, commuters, the sick and school children are worst sufferers of such actions, adding that with greater understanding and tolerance of opposing views, both government and labour can amicably resolve lingering issues to the advantage of all.