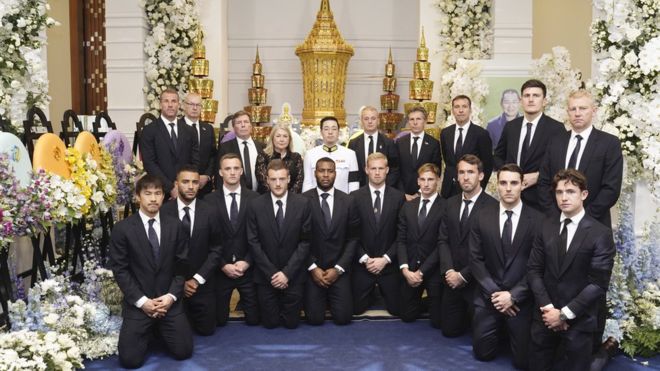 Leicester City players are in Thailand for the funeral of the club’s owner, who was killed in a helicopter crash.

Jamie Vardy and club captain Wes Morgan are among the players who attended a prayer ceremony at a Bangkok temple for Vichai Srivaddhanaprabha’s funeral.

It began on Saturday with Buddhist bathing rituals, and is being followed by a week of recitation ceremonies.

The helicopter crashed after taking off from the club’s stadium on 27 October, killing Mr Vichai and four others.

The Leicester players travelled to Thailand on the 12-hour flight on Saturday after winning 1-0 at Cardiff City in the Premier League, in the first game since his death.

They joined Sunday’s Buddhist prayers for Mr Vichai and will do so again on Monday before arriving back in the UK the following day to prepare for their home match against Burnley on Saturday.

Press agency AFP reported that on entering the temple, players gave Mr Vichai’s family a hug, and then offered jasmine flowers as they knelt in front of an octagonal jewelled urn given by the king.

The 32-year-old, who was a member of Mr Vichai’s staff, was a runner-up in Miss Thailand Universe in 2005, where she was listed as being from Bangkok province.