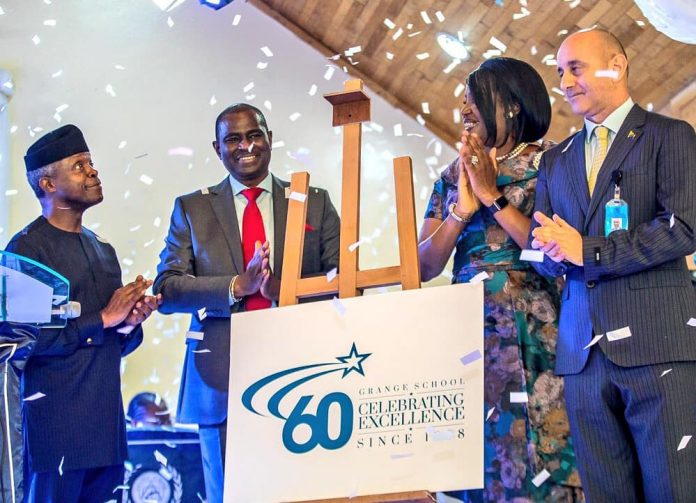 Grange School Lagos has celebrated its Diamond Jubilee with the official unveiling of its Anniversary Logo by the Vice President, Professor Yemi Osinbajo, at the school premises in GRA, Ikeja, Lagos.

The event, which saw in attendance different dignitaries across all sectors including education, kicked off with the arrival of the Vice president. The staff and students of Grange school were all in their best ensuring a well-coordinated and highly engaging ceremony.

Highlights of the event included a performance from the school choir, rendition from the school primary and secondary musical band, as well as the grand unveiling of the 60thAnniversary Logo by the Vice President.

As the Special Guest of honour at the ceremony, the Vice President talked about the link between quality education and poverty reduction. “Education erases poverty by almost 60 per cent in a community, increases earnings by 10 per cent and reduces a nation’s inequality. To eradicate poverty, we equip the young people with education; this is to develop the category of people ready to take on the challenges of the 21st century,” Osinbajo said.

He further explained that the critical issue being looked at is how to develop a new curriculum for education. “We have a threefold plan; first is ensuring that we are able to attain all of the sustainable goals. Those standards include school enrolment, quality of education, adult literacy, quality of teaching, and we intend to meet all of those targets”.

The Headmaster of the School, Mr. Guy Cassarchis, in his address during the ceremony said every school had its history, adding that Grange School understood the importance of quality education and learners were taught to be role models and mentors who would be capable of facing whatever challenges occur when they move on from school. He further stated that Grange School was putting together a football Academy which will eventually be opened to other talented children outside the School to be trained and positioned for opportunities with International Football club scouts that have partnered with Grange School.

The Chairperson, Grange School Governing Council, Mrs Awuneba Ajumogobia, while addressing the media at the press conference which took place on the same day, elucidated that the school over the years had become a reference point in primary and secondary education in Nigeria, adding that its students enjoyed first choice privileges from some of the most prestigious tertiary institutions globally. She added that Grange school owed its impressive academic accomplishment to its dedicated teachers, intelligent students and adequate support of stakeholders.

The Logo unveiling is the first in a series of events to mark Grange School’s Anniversary as the Institution continues to advocate quality education, innovative teaching methods and better remuneration for its teachers.

Grange School is a co-educational private day and boarding school offering the British Curriculum to a multicultural community of nursery through to secondary school, which was founded in 1958 by a group of interested parents who desired to provide standard education equivalent to that which was obtainable in the United Kingdom. The school is located at Harold Shodipo Crescent, GRA Ikeja, Lagos Nigeria.