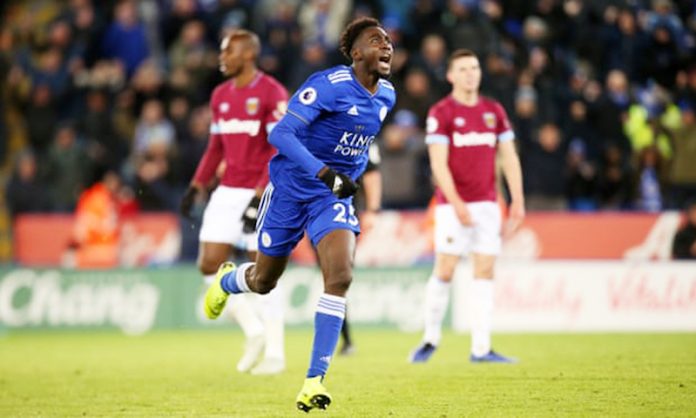 Super Eagles midfielder Wilfred Ndidi has scored his first Premier League goal of the season as Leicester City were held to a 1-1 draw by West Ham United yesterday. Ndidi was named among the starting line up for Leicester City by head coach Claude Puel along with compatriot Kelechi Iheanacho.

The 21-year-old midfielder however could not prevent West Ham from taking the lead at the King Power Stadium through Fabian Balbuena in the 30th minute.

Ndidi was however in action when he received a horrendous tackle from West Ham United captain Mark Noble who aimed for his ankles. Referee Michael Oliver sent Noble off for the challenge in the 38th minute but Leicester City could not find a breakthrough a West Ham held on till the halftime break.

Leicester City started the second half with more intention and purpose to score as record goalscorer Jamie Vardy was introduced for Rachid Ghezzal for the second half. His introduction however provided no solutions and Iheanacho had to be replaced by pacy England winger Demarai Gray in the 62nd minute.

With just two minute left in the second half Ndidi came to the rescue of Leicester as his long range shot deflected off Balbuena and past Lukasz Fabianski.

West Ham held on in the final minutes for a draw as Ndidi’s goal meant the Hammers and Foxes shared a point each.