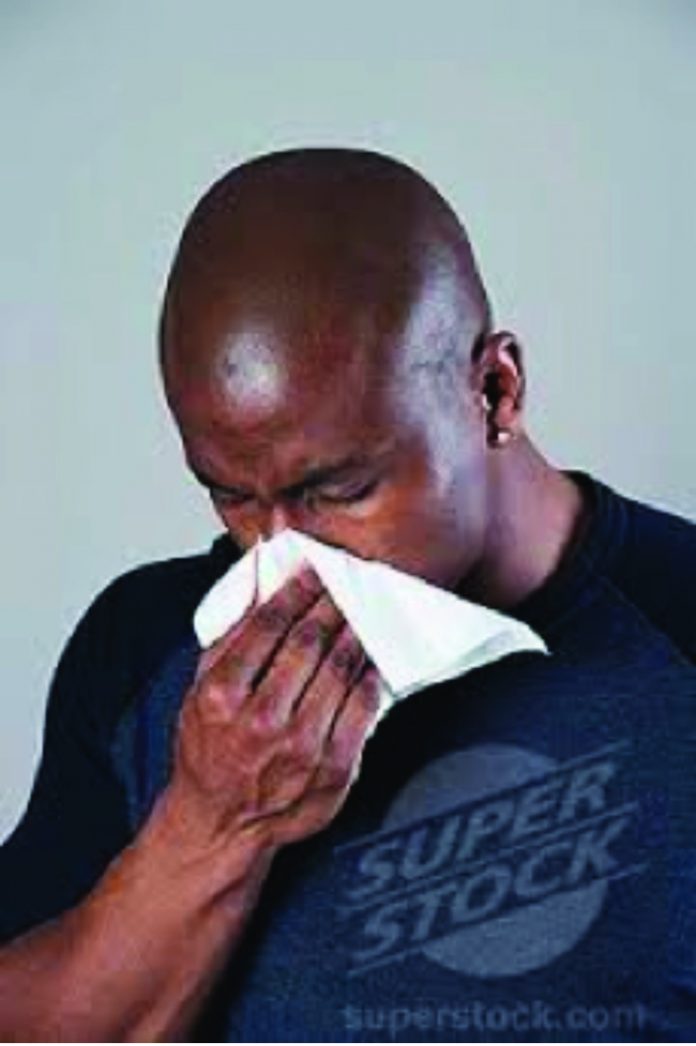 There are times when the human body just  slows down and if at this time you are exposed to infections or harsh weather conditions, you may just come up with symptoms of common colds.

The body’s immune system is compromised and the infection sets in. It could be caused by various infecting agents which have been able to attack  your body defense and you become ill.

A cold is a mild viral infection of the nose, throat, sinuses and upper airways. It’s very common and usually clears up on its own within a week or two.

Common colds,  known as viral rhinitis, the ordinary cold is among the most common infections among humans. It is primarily an upper respiratory tract  infection that can be caused by several virus families. The virus family that is responsible for up to 40 percent of colds is called rhino-virus and it has over 100 distinct virus types.

Since common cold symptoms can be caused by so many viruses, it has not been possible to develop a simple cure for the infection. The common cold should not be mistaken for influenza, which can make you ill for much longer, has more severe symptoms, and can result in hospitalisation or lead to serious health problems including pneumonia.

Typical symptoms associated with common cold are well known to both doctors and patients. Over half of patients start by developing a sore throat followed by congestion in the sinuses and the nose, sneezing and a runny nose. These symptoms are usually accompanied by fever, cough, and hoarseness which may outlast them sometimes by a few weeks. High fevers, are however, rare from common cold alone.

More severe symptoms, including a high temperature (fever), headache and aching muscles can also occur, although these tend to be associated more with flu.

The symptoms will however, last longer if you have developed a viral bronchitis concomitantly. This happens when the same virus infects both your upper airways and the inner airways. Apart from bronchitis the congestion caused by the common cold can create conditions for other illness, with bacterial sinus infections (sinusitis) being the most common. Patients with respiratory track complications such as asthma may experience more severe symptoms lasting for a month or even longer.

Patients are at their most infectious during the first 24 hours but they continue to remain infectious for the duration of the symptoms. As the cold progresses, the discharge from your nose will initially be runnier but will thicken and may even turn yellow. However, this is quite normal and there is rarely any need for antibiotics.

In most cases, the common cold goes away within five to ten days although a few symptoms can last for as long as three weeks among certain individuals.

Transmission of the common cold commonly occurs when viruses that cause the disease from the mouth, nose or sneezed or coughed as droplets by an infected individual come into direct contact with a healthy individual. Viruses passed from the hand of one individual to another’s hand can also result in transmission if the second person proceed to rub or touch his/her nose or eyes, where a new infection takes root. One can also get infected by coming into contact with surfaces recently touched by a infected individual.

Due to the ease with which the common cold gets transmitted, nearly half the family members, flatmates or roommates also end up getting infected. There is also a high rate of transmission of colds in day care facilities and schools.

How do colds spread?

In general, a person becomes contagious from a few days before their symptoms begin until all of their symptoms have gone. This means most people will be infectious for around two weeks.

You can catch the virus from an infectious person by:

A number of different viruses can cause a cold, so it’s possible to have several colds one after the other, as each one may be caused by a different virus.

To lower your chances of getting infected,

you can take some simple steps to help prevent the spread of a cold. For example:

It’s been suggested that vitamin C, zinc and garlic supplements may help reduce your risk of getting a cold, but there’s currently not enough strong evidence to support this.

There’s no cure for a cold, but you can look after yourself at home by:

Many painkillers and decongestants are available from pharmacies without a prescription. They’re generally safe for older children and adults to take, but might not be suitable for babies, young children, pregnant women, people with certain underlying health conditions, and those taking certain other medications. Speak to a pharmacist if you’re unsure.

Although it is possible for you to improve the symptoms of common cold using a variety of medical therapies, they do not cure, shorten or prevent the illness. It is advised to try and keep yourself comfortable and  get as much rest as possibly, drink lots of fluids and treat the symptoms.

Some of the common ways to treat the symptoms of cold are:-

Garlic’s antibacterial and antiviral properties can be very helpful in getting rid of cold symptoms. Garlic is good for the immune system and helps open up respiratory passages, and also helps flush toxins out of your body.

Mix together one crushed garlic clove, two teaspoons lemon juice, one teaspoon honey, and half a teaspoon cayenne pepper or red chilli powder. Consume it daily until the symptoms subside.

Boil four to five chopped garlic cloves in a cup of water and add one teaspoon of honey. Drink it two to three times a day.

You can also eat raw garlic or use a few drops of garlic oil in your food and drinks.

Honey can be of great help in soothing an irritated throat as well as shortening the lifespan of a cold. The high amount of nutrients and enzymes in honey help kill bacteria and viruses that cause colds.    The simplest home remedy is to consume a mixture of one teaspoon of lemon juice and two teaspoons of honey. Take it every two hours to get immense relief from your cold and sore throat.

If you prefer, you can simply swallow a spoonful of raw honey.

Spice tea is a highly beneficial Ayurvedic remedy to get rid of common cold.  Dry roast and grind a quarter cup of coriander seeds, one a half tablespoons each of cumin and fennel seeds, and a quarter teaspoon of fenugreek seeds.

Now, boil a cup of water.

Let it simmer for three to four minutes.

Bring the solution to a boil and then strain it.

Sip it slowly while it is hot.

Drink this spice tea daily until the symptoms subside.

Ginger can be helpful in treating common cold and its symptoms due to its antiviral, expectorant, and anti-inflammatory properties.  Eat raw ginger or drink ginger tea several times a day. For enhance the effectiveness of ginger tea, add a lemon juice and honey to it.

You can also make a paste of ginger, cloves and salt and eat one-half teaspoon of it two times a day.

For a runny nose, mix equal amounts of dry ginger powder, clarified butter (ghee) and jaggery (gur), a natural sweetener. Consume this mixture daily in the morning on an empty stomach.

Chicken soup has many essential nutrients and vitamins that help treat common cold symptoms. The high antioxidant properties in chicken soup speed up the healing process.

Those suffering from a cold can get relief from homemade red onion syrup. To make the syrup, you will need red onions and honey or brown sugar.

Slice two to three red onions horizontally. Put one slice of onion in a bowl and add raw honey. Repeat the process until the bowl is full.

Cover the bowl and leave it for 12 to 15 hours. When you open the bowl, there will be thick liquid like syrup.

Drink a spoonful of the syrup several times a day to get relief from sore throats and other symptoms of a cold.

SEE YOUR DOCTOR IF :

Some cases of common cold can result in the development of complications such as bacterial infections of the lungs, sinuses or middle ear. If you develop ear pain, tooth ache, high fevers, breathing difficulties, severe pain over the sinuses, then it is advised to consult your physician to ascertain that you have not contracted a more serious illness such as bacterial sinusitis, a middle ear infection, pneumonia or bronchitis.