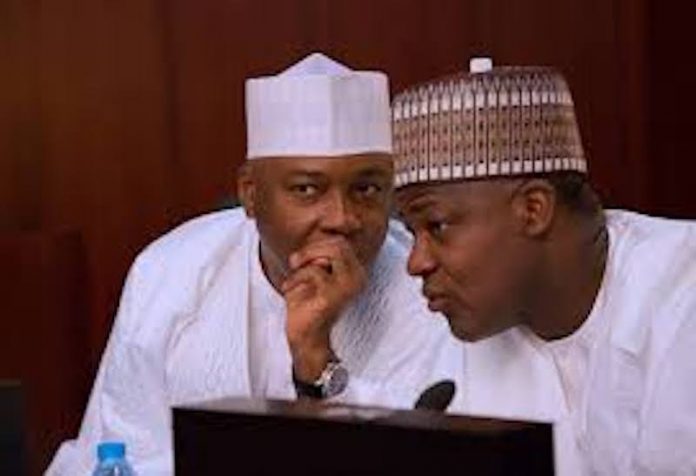 The President of the Senate, Dr. Bukola Saraki, and the Speaker of the House of Representatives, Hon. Yakubu Dogara, have underscored the important roles the National Assembly has played in helping to save Nigeria from collapse.

The two leaders, who spoke yesterday at the convocation ceremony of the National Institute for Legislative and Democratic Studies (NILDS)/University of Benin Post Graduate Programmes for the 2015/2016 and 2016/2017 academic sessions held at the National Assembly premises, said lawmakers in the eighth assembly especially have committed themselves to improving the lives of Nigerians.

According to Saraki, who is the Chairman of NILD governing council, the core legislative oversight and representative functions of the legislature is to contribute to the quality of governance.

“There is no gainsaying the fact that the core legislative oversight and representative functions of the legislature provide an essential contribution to the quality of our democracy and governance as a whole.

“In the eighth National Assembly, the legislature has played a greater role in policy formulation and has engaged more robustly with the executive at the various stages of policy formulation. This stems from our conviction that the task of nation-building must be a collective one, and this sometimes requires sacrifices on the part of the individual.

“Many of the legislative measures we have pursued since 2015 have been targeted at driving productivity, easing access to finance, creating jobs and improving livelihoods. Legislative proposals in this area are focused on Micro, Small and Medium Enterprises (MSMEs) particularly in reducing regulatory burdens and easing access to capital, with the objective of having a large number of sustainable fast-growing small and mid-size businesses. We have also taken legislative action to tackle tax avoidance and evasion in order to encourage compliance with tax obligations by all persons.

“We have shown commitment to the need to develop our education sector, with a special focus on improving the quality of primary and secondary education, which has suffered from lack of investment and infrastructural provision. Our vision is to see to the attainment of 100 per cent literacy rate for all Nigerian children aged 12 and below. The Senate has also amended the Universal Basic Education (UBE) Act to ensure that the two percent budgetary allocation to Universal Basic Education Commission by the federal government is increased to three percent,” Saraki noted.

Also listing aspects of basic healthcare and human capital development as areas that have attracted the attention of the lawmakers, Saraki attributed the successes recorded by the legislators to the professional permanent staff and legislative aides, describing them as the “main resource for continuity and sustainable change in a legislature is the legislative bureaucracy.”

Arguing that the legislature is the true face of democracy, especially in maturing democracies such as in Nigeria, where it serves as the stabilising force with robust constitutional powers to check-mate the executive misuse and abuse of power, Dogara said it is preferable to build healthy and strong institutions like the legislature than strong personalities.

He said: “It is our considered opinion that if there is any institution of government that should receive priority attention in terms of capacity building, it is the legislature. This is because the legislature is the true face of democracy. In our maturing democracy in this country, the legislature is the stabilising force as it has robust constitutional powers to check-mate the executive misuse and abuse of power which occasionally rears its head.

“Credit must be given to the Nigerian parliament, which has continued to make laws, perform its representative functions and make robust use of the power of oversight in order to preserve our hard-won democracy and achieve good governance.”

According to Dogara, “A key factor in moving from a nominal democracy to democracy that delivers development results for people is an effective legislature that holds the executive to account, especially in developing countries burdened by weak governance structures like Nigeria, and lamented that whereas much work has been done on strengthening executive leadership, not much attention has been paid to systematically building the capacity of the legislature to effectively contribute to national development.