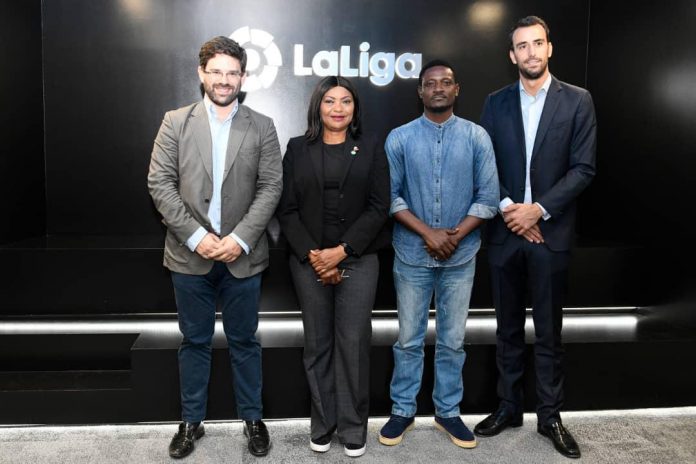 LaLiga and the Nigerian Women Football League (NWFL) recently held a preliminary meeting with the aim of initiating collaboration between both entities.

The meeting, which took place at the LaLiga headquarters in Madrid, was attended by Head of LaLiga women’s football, Pedro Malabia; Chairperson of the NWFL, Aisha Falode; Commercial and Corporate Strategy Director of the NWFL, Timothy Timisire; and Director of the LaLiga office in Nigeria, Javier del Rio. The meeting was a follow up to the agreement both parties signed last February.

According to Falode, the principal aim of the meeting was to gain a better understanding of how LaLiga is developing women’s football in Spain, as well as to learn about the development and future of the women’s competition in Nigeria.

Other issues on the agenda included the discussion of aspects related to initiatives targeted at raising visibility, marketing strategies and economic growth targets.

Delegates from the NWFL also expressed a special interest in understanding the structures of the Liga Iberdrola clubs, for which Pablo Mantilla, director of the Valencia Foundation, and Marina Gassent, coordinator of the women’s section of Valencia CF were also present in the meeting.

The agreement, signed in February, outlines the intention of promoting women’s football in both countries through the exchange of marketing intelligence and strategies and the implementation of actions devised to boost visibility and awareness.

Another objective is to incentivise women’s access to sports management, as well as drive greater cooperation in the development and implementation of corporate social responsibility actions that promote gender equality and the integration of women not only in football, but also in other sports.

The signing of this agreement reflects both institutions’ commitment to maintaining the sustainable development and growth of women’s football both in Spain and in Nigeria.