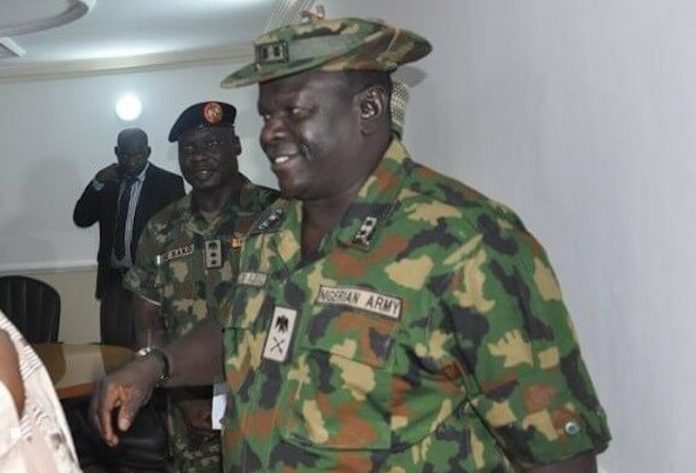 Following brutal military operation in Dura-Du in Jos South Local Government Area (LGA) of Plateau State over missing Major General Idris Alkali (rtd), a house wife, Mrs. Julcit Barde, has cried out to government and Nigerians to help rescue her husband, Nansel Paul Barde, who has been harassed and incarcerated in military custody for over one week.

This is even as the Plateau State correspondent of Punch Newspaper, Mr. Friday Olokor, has decried his ordeal in military detention having been arrested and incarcerated for 28 hours for no obvious reason.

Barde, while addressing a press conference in Jos, said, “Major had approached my husband to give out our property that is near the pond to the soldiers, so that while they carry out their operation they could stay there. Since we are not yet occupying the property, my husband obliged them, and the soldiers occupied it.

“But as they evacuated the water from the pond they flooded the building environment with it so much that a part of the building collapsed. This prompted my husband to approach the military for compensation.”

She said while her husband complained to the army major leading the operation, a General who visited the operation site simply said, “Military don’t pay compensation.” Rather than talk of the compensation, the army general ordered his arrest, saying he should know about something about the pond and the missing general. They claimed he was being taken away to help the military with investigation.

She added that, “Since his arrest, I have not seen my husband for over a week; his phones have been switched-off and possibly seized from him. I have not had access to my husband since then. My children cry everyday asking for their father; I have had sleepless nights thinking of the whereabouts of my husband and what must be happening to him.”

She called on President Muhammadu Buhari, the Chief of Army Staff, Lt. General Tukur Buratai, and the public to intervene for the unconditional release of her husband, querying if it was a crime for her husband to render a help to the Nigerian Army. “As I speak, they are still occupying our property.”

Also speaking, Barde’s lawyer, Mr. Andrew Joshua, lamented his incarceration for over a week without a charge, describing it as unlawful. He said “I want to believe that General Buratai is not aware that my client is unlawfully being detained. But I use this medium to call on him to order his release.”

Meanwhile, a human rights activist, Mr. Gad Shamaki, has called on all well-meaning voices in Nigeria to arise over the injustice done to the Barde’s family and other family in similar fate.

The Punch Newspaper correspondent said, “I came back last (Sunday) night after spending about 28 hours behind bars over a former Chief of Administration in Nigerian Army, General Mohammed Idris Alkali (retd), who had been declared missing in questionable circumstances..

On that Saturday October 6 2018, I went to the UBA ATM and did cash transaction and decided to buy Irish potatoes and eggs at the popular ANNE BREEZE RESTAURANT in Rayfield area of Jos. The waiters have not brought my food when soldiers in two lorry trucks (about 30 of them), all masked and armed, swooped on the place, shot indiscriminately at sight and arrested every human being they sighted.

“Passers-by were not spared; women and persons who were living in nearby houses were picked. Even my identification that I am a journalist with PUNCH Newspapers didn’t help matters as they did not even want to see my Identity Card. We were 37 victims of invasion, 28 men and 9 women.

“While two elderly men in their mid-70s including a retired Chief Superintendent of Police, Chuwang Choji was picked, a serving army general who was drinking with a young woman was spared. Choji’s son, Chollom, was not spared as they were picked in their house. The old man just returned home to face the invaders.

“As the soldiers drove us, we were told to put off our telephones. The law was that you don’t talk, you don’t move and even when nature, for instance sneezing knocks, you are in trouble.

“The 28 of us (men) were driven to the 3 Division of Nigerian Army in Rukuba Barracks, Jos and kept in an uncompleted building. They confiscated all our belongings, including telephones, money, ATM cards, car and house keys.

“Many of the victims couldn’t take their cars and personal properties. We had no access to my families; I couldn’t communicate my family, editors, friends, and colleagues because they took our phones.”

Also condemning the harassment, the Nigeria Union of Journalists (NUJ), Plateau State Council said it was concerned about the way and manner the Nigeria Army is going about its search for missing general.

In a statement signed by the Chairman and Secretary, Mr. Paul Jatau and Peter Amine, the union said, “The arbitrary harassment, intimidation and arrest of members of the public as part of their search is a thing of worry to the NUJ.

“We expect the Army to conduct its intelligence and go after those they suspect and not arrest anybody in sight.

“We recall that at the commencement of the evacuation of water from Dura Du pond in Jos South, the army told the public that they have credible intelligence that the missing general’s car was in the pond and true to their word, the car was retrieved from the pond.

“We expect them to use the same intelligence they used to locate the car to go after the suspects as they continue the search for Gen. Alkali or his body. We are perturb because innocent people are not spared by the crude method they have employed thereby instilling fear and overheating the polity.

“The army on Saturday in a statement assured the public that they will exhibit high level professionalism according to international standard in the search but what is on display contradicts the assurances. The same Saturday, a member of our union, a reporter of the Punch Newspaper was arrested alongside other persons by the army and was detained for 28 hours in Rukuba Barracks as part of the search.

“We wish to state unequivocally that while journalists support the search for the missing senior officer, indeed the Nigeria Union of Journalists, Plateau State Council will not hesitate in withdrawing its members from covering their activities if the intimidation and harassment continues.”