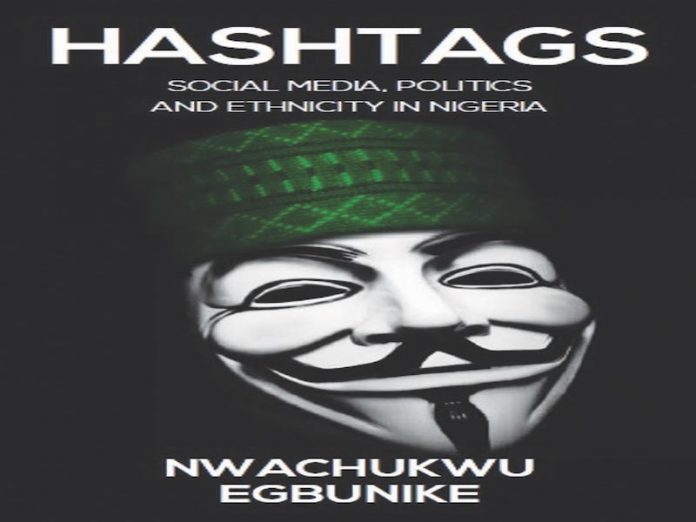 The first thing that caught my attention while reading Nwachukwu Egbunike’s Hashtags was his definition of the Nigerian Twitter Overlord as ‘‘agenda setters, news framers, experts on all matters’’. Experts on all matters—this aptly sums up my own frustrations when scrolling through my Twitter feed. Although I could see people that neatly fall into that categorisation on Twitter, I did not know a word for them. Thus, when I saw this word in the definition of terms—way before the book actually starts—I knew I was in for a brilliant ride. And Hashtags, ambitious as it is, did not disappoint.

Several books have been written on the role of social media in politics, but Hashtags stands out for the participatory reflection that it offers. Egbunike does not write as an expert looking in and analysing from the outside but as a member of society reflecting on his own use of social media and those of others. In one of the chapters in which he reflects on his early use of Facebook, he describes how Facebook reconnected him with an old classmate who he had practically forgotten—just like the rest of us. In other chapters, he reflects on weightier topics such as how social media can be used to further polarise an already polarised country. What we end up with, therefore, is a book that allows us to, first, realise the power and versatility of social media and, second, to consider our own use of these media.

Hashtags is a carefully curated ensemble of articles that Egbunike has written over an eight-year period in various outlets including Global Voices, Feathers Project and African Hadithi. Divided into three parts—Ethnic Hate Speech, Politics and the Nigerian Politico-Twitterati, and Online Free Speech—it reviews the discourses on politics and ethnicity in Nigeria on social media. Politics and ethnicity are very sticky topics in Nigeria, and the unmediated reach of social media further complicates any objective analysis of these concepts. Thus, Egbunike’s experiences as a journalist, media scholar, publisher and writer were clearly relevant in this book and place authority on the things that he says. Thus, when he writes, “our vibrant digital sphere is fraught with hatred and vile speech,” we should be worried. Is this “vile and hatred” a part of the Nigerian society hitherto hidden which the safe space of the online community allows citizens to exhibit or is it unique to the architecture of social media where a minority who live at the fringes of society can masquerade as influential?

What I find most unique in Hashtags is two very Nigerian solutions—Fencism and #TrollCabal—to two social media problems—polarising political discourse and trolling. Fencism is the middle ground between narratives that are supportive of the government and narratives that oppose the government—both lacking objectivity and largely hateful. #TrollCabal was formed in 2014 on Twitter to beat the trolls at their own game using sarcasm—if the insults are turned to jokes, can they really hurt? Will these work in all climes and for everyone? Perhaps not. But what Egbunike shows is that there are alternatives to combating trolling or hate speeches [perhaps in addition to] to censorship of hateful views, and these solutions are largely dependent on how we use the media ourselves.

Hashtags also reflects on the successful use of social media to bring about political change in parts of Africa—from the less popular #FreeZone9Bloggers to trends such as #BringBackOurGirls—and the influence of social media on the changing landscape of politics in Africa—for instance, in 2011 Goodluck Jonathan declared his candidacy for President on Facebook. Side-by-side these brilliant stories are equally sad ones such as attempts to gag free speech, for instance, in Ethiopia and hate speeches through the rise of groups such as IPOB that operate mainly through social media channels.

Comparing social media to a sword, Egbunike writes: “like a double-edged sword, while social media may be a good tool for information dissemination, it could also be a purveyor of hate speech. Many people are unable to identify what side of the sword is being used, they only take the sword and continue its use. This could have dire consequences for not just individuals but nations”. Thus, it comes down to individual users to choose what side of the sword to use and perhaps sheath the sword sometimes and listen to the views of the other side because as Egbunike argues, “so long as there is no conversation there will be no change”.

–––Dr Confidence Uwazuruike, is of the Faculty of Media and Communication, Bournemouth University, United Kingdom