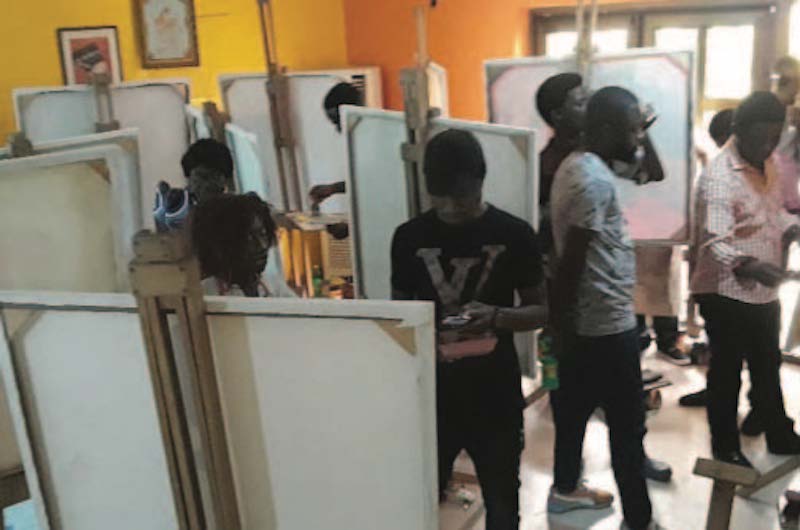 The passion for excellence united a group of first-rate professional studio artists, who were already at the peak of their careers. Ten years on, they have stringed together a cavalcade of activities to relive the memories of how they came together to further the cause of the contemporary Nigerian art. Okechukwu Uwaezuoke reports

Back then, it couldn’t have been more than a whim. OK, it was indeed the high-octane idea of a posse of artists, who were thinking out of the box. And for them, not even the existence of the Society of Nigerian Artists – which even after decades of its existence continued to grow from strength to strength – could stifle their aspirations. These creative like-minds crystallised the thought of advancing their ideals through forming a guild.

Enter the Guild of Professional Fine Artists of Nigeria, whose members are the visual arts community’s leading lights. Indeed, they have earned their stripes in this talent-glutted art scene. Hence, it is important for them to not only have a say on how the image of their profession is being projected, but also on how the organisation managing its affairs is run.

Perhaps, one of the guild’s greatest achievement so far was the fact that the works of its members were featured in a segment of theBonhams, Africa Now auction in the UK in 2012. The works of the members – Lekan Onabanjo, Sam Ovraiti, Edosa Ogiugo, Abiodun Olaku, Duke Asidere, Ben Osaghae, Bunmi Babatunde, Reuben Ugbine, Alex Nwokolo, Tola Wewe and Fidelis Odogwu – made up the auction’s were lots 191 to 215.

Now, on its 10th year, the body which is simply known as GFA, is seeking ways to assert its relevance among the art public. First, it has held an art workshop. The event – held from September 11 to 13 at the Ovie Brume Foundation in Victoria Island, Lagos – was open to the public and deemed successful. Its facilitators, who are among the GFA’s leading lights, were Sam Ovraiti, Edosa Oguigo, Alex Nwokolo and Duke Asidere.

In attendance at the workshop were 45 artists and had as its fringe benefit the preparation of its members for the upcoming exhibition. The programme, which was facilitated by a GFA’s past president Abraham Uyovbisere, was so well attended that the attendees spilled over outdoors. “Materials were also provided for participants,” its current president, Sam Ebohon, explained. “The aim was to create a bridge that will endear people to the association as we encourage and mentor other artists using our wealth of experience and clout. Participating artists were encouraged to pursue their artistic curiosities by experimenting on new styles and approach in expressing their ideas by surmounting their fears and inhibitions.”

With the three-day event, the guild had hoped to make itself more accessible to the people. In an art scene that is already cocooned in its exclusivity, the GFA needs such outreach programmes not only to avoid being seen as a cabal but also to assert its relevance in the art scene.

“It is for us to figure out things that concern the artistic space of this country,” Ebohon continued. “Now that we are stable, we are also beginning to impact on art, on the profession generally. It is to elongate and make this impact felt and known. Let the people know; let the society come to terms with our role in the society as professionals; as contemporary artists. This is why the Guild feels that we needed to engage in something that is real and practical.”

The workshop, not unexpectedly, featured mainly painters. Hence, the canvases, easels and paints at the venue. It encouraged the participants to become more adventurous and experimental. That should explain the presence of Sam Ovraiti, Edosa Oguigo, Jerry Nnubia, Emenike Ogwo, Joshua Nmeserionye, Juliet Ezenwa and Duke Asidere, among others.“Some artists experimented in water colours. They were told come up with something out of the box; something very special and unique, away from their usual signature techniques.”
In the end, each artist was asked to donate one of his works to the foundation, which will be featured in an exhibition that will run concurrently with another programme.

On its choice of Ovie Brume Foundation as the workshop’s venue, Ebohon disclosed that the guild conformed to ideals of the centre, which was purposely built to encourage creative endeavours. It was at the foundation, that the guild’s first president Uyovbisere was elected and inaugurated. The idea of going down the memory lane reminded the GFA members of how the guild started. Hence, kicking off its 10th anniversary celebrations at the venue re-enacts the enthusiasm of the first years.

It is not as though the guild doesn’t have enough activities with which to sustain the spotlight. Already, the members, as individuals and role models, practically dominate the art scene with many of their acolytes moving on to become wave-makers in the exhibition circuit. Then, their works are among the most sought-after by the local aficionados.

Hence, it should surprise no one that a symposium being organised by the guild on Friday, October 12 at the National WMuseum in Onikan, Lagos, will be graced by such art community’s greats as Omooba Yemisi Shyllon (the revered collector and founder of Omooba Yemisi Adedoyin Shyllon Art Foundation), Kolade Oshinowo (one of the most celebrated masters of the art scene), Efe Dafinone and a leading GFA member Duke Asidere. The symposium, which is meant to be an interactive talk and discussion on the challenges of fine artists today, will be moderated by the art educationist, Dr Kunle Filani.

A programme like this chimes with the guild’s aims and objectives, which revolves around the “promotion of art appreciation in Nigeria with the additional benefit of projecting a good image of professional artists in the society”.
Of course, the group is also concerned about establishing ethical standards and rules, which should encourage and enhance the proper practice of the profession. Thus, it hopes to make its voice better heard by the art public. Indeed, workshops, symposia and exhibitions, among other art-related activities are very effective ways of fostering interaction between not only the artists and the public, but also between them and their non-Nigerian colleagues.

Still in the mood of its 10th anniversary celebrations, the guild will be featuring the best works by its members at the Omenka Gallery in Ikoyi, Lagos from November 17 to 28. This, Ebohon hopes, will avail collectors and art lovers the opportunity to acquire works by the artists at the “best” prices.

An award and gala night, scheduled to hold at Terra Kulture sometime in December, will bring the anniversary celebrations to a close. According to Ebohon, the guild will be honouring members and players in the industry, who have added value to the profession.
Meanwhile, the guild, whose Board of Trustees include Yinka Fisher, Chairman and Ede Dafinone, Ifeoma Idigbe, Abiodun Olaku and Olu Ajayi, plods on into the future full of optimism..