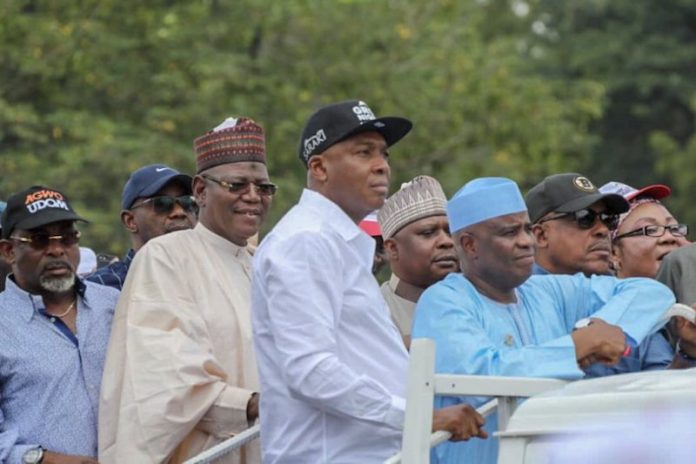 By Alex Enumah and Adedayo Akinwale in Abuja

Leaders of the Peoples Democratic Party (PDP), accompanied by the party’s presidential aspirants, yesterday staged a peaceful protest at the Headquarters of the Independent Electoral Commission (INEC) and that of the police to demand the declaration of Senator Ademola Adeleke as the governor-elect of Osun State.

The PDP leaders matched peacefully to the headquarters of INEC to demand free, fair and credible elections in 2019, and later headed to the Force Headquarters of the Nigerian Police where they were teargased by policemen.

The party leaders said that the protest was an introduction to civil disobedience, adding that the party had agreed that it would do everything within the ambit of law to reclaim every stolen mandate.

However, the police erected a barricade to prevent the PDP leaders from entering their premises, and proceeded to shoot teargas at them, forcing the protesters to retreat in different directions.

At INEC headquarters, the Senate President said that Nigeria had raised the standard of the electoral processes before the present INEC Chairman, Prof. Mahmood Yakubu came on board, warning the electoral body against taking the country backward.

The PDP leader demanded that the 2019 elections must be free, fair and credible, stressing that there was need to put an end to the issue of inconclusive election.

Saraki warned INEC that Nigerians would not take elections that are not credible, while urging the

He stated: “We are here representing millions of Nigerians to speak to you; that INEC you have a responsibility by law, by the constitution to do what is right to all Nigerians.

“Nigeria has raised the standard of electoral processes, take us forward, don’t take us backward. The last two elections have been said to be a sham by people all over the villages and towns of Africa, and in other continents. INEC, enough is enough. “Just last night, the Senate and Congress in the United States of America issued a statement saying enough is enough. We must have credible elections in Nigeria. You are not a department, or a division of the APC. You represent the entire Nigeria and Nigerians are saying give us free and credible election.”

Also, the national chairman of the party warned that the country was sitting on a keg of gun powder, noting that Nigerians were aware of the activities of INEC and the police.

According to Secondus, “You are pushing Nigerians to the wall, and when you push them to the wall there would be resistance. We hope we will not get there, but this will serve as a notice.”

The opposition leaders again demanded that INEC Chairman and INEC National Commissioner, Amina Zakariyau should resign, saying “she is the manipulator of all elections.”

On his part, Tambuwal urged the INEC chairman not to allow anybody, no matter how high, to use him to undermine the will of Nigerians.

Tambuwal said: “You cannot suppress us, you cannot intimidate us. Elections in Nigeria must be held freely and fairly, and whoever wins should be given the mandate. That is what we want and we shall take nothing less.”

Also, Fayose said that the damage done to the country’s democracy and by extension the common man was enough.

He said: “If the people cannot choose their leaders anymore, then we are in trouble. In 2014, APC won election in Osun State by 114,000 votes. But this last election, with all the rigging, APC won by 400 votes, that statement is enough to say APC is no more in demand in Nigeria.

“We are not asking for favours, this country and this INEC belong to Nigerians and Nigerians must be respected by allowing them to make a choice.

Responding on behalf of the INEC chairman, INEC National Commissioner on Legal Matters, May Agbamuche-Mbu, assured the PDP leaders that the 2019 elections would be free and fair and that the opposite party will have reason to acknowledge INEC.

She said: “The commission takes this demonstration very seriously. We are happy that the protest is peaceful and carried out in civilised manner.

“INEC is up to its job, we are all here in INEC as professionals and not politicians. We are going to do our best come 2019.

“I must say we are a team and decisions are made by the commission and not by any individual. All your comments have been noted and it will be passed to the chairman and the entire commission.”

Meanwhile, three of PDP leaders, Saraki; Melaye and Ben Bruce, who were among several that were dispersed with teargas at the police headquarters, have been summoned to appear before the Inspector General of Police (IGP) Monitoring Unit for investigation over alleged disturbance of public peace and attack of some police personnel and the Headquarters of the Police Force, Abuja.

A statement by the Force Public Relations Officer, DCP, Jimoh Moshood, said: “Today at about 1330Hrs, unruly and violent protesters who are members of the Peoples Democratic Party (PDP) in their hundreds with thugs and miscreants inside several trucks and vehicles blocked the Shehu Shagari way in front of the Nigeria Police Force, Headquarters creating a gridlock of traffic on the highway and preventing motorists, road users and other members of the public from having access and passage on Shehu Shagari way thereby disturbing public peace and public safety and causing innocent people to scamper for safety.”

But in a swift reaction last night, the PDP condemned as dastardly, unwarranted and unprovoked, the unleashing of violence on the leaders of the party, including the Senate President and state governors, by the Police.

The opposition party stressed that this unwarranted attack has left no one in doubt that the police has finally been turned into a militant wing of the APC, with direct orders to use force to repress opposition and turn the nation into a one party state.

The National Publicity Secretary of the party, Mr. Kola Ologbondiyan said in a statement, vowed that no amount of attacks, aggression or acts of intimidation would deter the PDP from confronting and dismantling the rigging machinery of the All Progressives Congress (APC) and coast to victory in 2019.

Also, in a statement signed by the Special Adviser to Senate President on Media and Publicity, Yusuph Olaniyonu, the party drew the attention of Nigerians to what it described “as the blatant lies contained in a press release issued by the Nigeria Police over the protest match staged by the PDP in Abuja against the infamous roles that the INEC and the Nigeria Police have been playing in recent elections across the country, particularly in the Ekiti and Osun gubernatorial elections.” 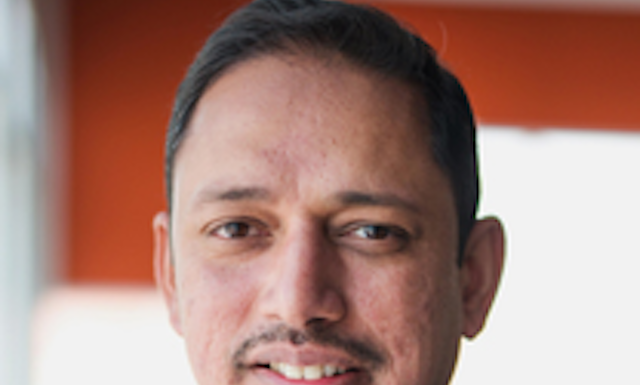