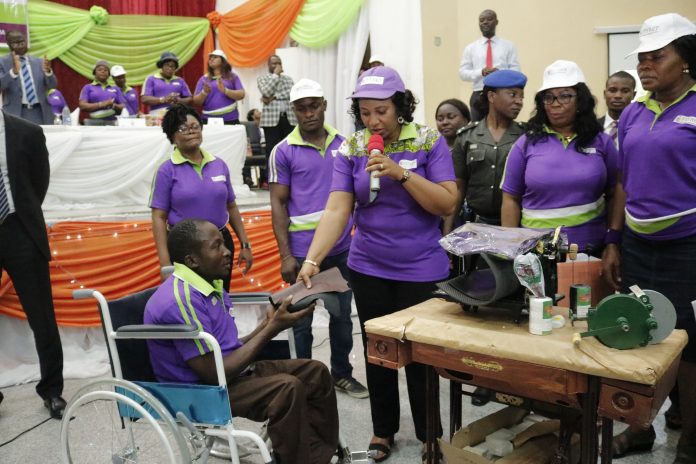 Until she became the wife of a governor, little, perhaps nothing was known of Mrs. Martha Emmanuel. As the wife of a top-notch banker then, she lived her life on the quiet lane; away from the prying cameras of the ubiquitous Nigerian media. Though on few occasions, she had been sighted at high-brow event venues in Lagos State and other states in Nigeria, but it was nothing to be compared to the present, where, as the first lady of the oil-rich Akwa Ibom in Niger, she literally lives her life in the public sphere.

Emmanuel, living up to her Biblical nature of caring, had three years ago, launched the Family Empowerment and Youth Reorientation Programme (FEYReP), targeted at, “easing the economic and social burden of the hapless poor and vulnerable”.

Looking back at their three years of impact, the first lady, popularly known as ‘Martha of the Moment’, said she is filled with satisfaction and fulfillment. According to her, “in spite of the harsh economic times, FEYReP has become the harbinger of hope to the vulnerable and indigent poor both within and outside Akwa Ibom State.

“In the course of the three years, FEYReP has left indelible imprint on the sands of time. The NGO has, most noticeably, contributed immensely to actualising the food sufficiency dream of the state governor through the introduction of innovative and community-driven farming and establishment of agro-processing factories across the three senatorial zones of the state. More specifically, the NGO has commissioned palm oil processing factories and cassava processing mills spread across the three Senatorial Zones: Eket, Uyo and Ikot Ekpene.”

At her Cassava Plantation located in Okobo LGA, for instance, FEYReP successfully launched the improved cassava variety to boost high cassava yield, an effort that has, unarguably, contributed to crashing the price of the people’s staple food: garri.  In the area of healthcare, FEYReP has partnered reputable organisations and agencies to bring succour to the people. In one of such partnerships, the NGO in conjunction with the MTN Foundation launched a free medical outreach, which conducted free cataract surgeries and equally distributed free eye-glasses and drugs to people with various eye issues.

In another of such outreaches, this time, with Akwa Ibom State Association, USA (AKISAN), FEYReP brought free diagnoses and surgeries for various ailments, to the doorstep of the people. Not done, the NGO also partnered the health giant; Neimeth Pharmaceuticals to deliver mass deworming of children across the 31 local government areas of the state. Equally living to its core mandate of family empowerment, FEYReP has disbursed start-up grants and equipment to over 5,000 beneficiaries mostly women and youths to enable them earn a decent living.

But if there is any of the FEYReP stories that touch the heart, it would be those of the hundreds of children, especially the 700 orphans who are being given a decent upbringing at the Divine Motherless Home, run and managed by FEYReP and perhaps, the scores of widows and widowers who were literally picked from the streets and given free well-built and furnished bungalows under FEYReP’s ‘Shelter of Hope’ intervention.

But the success story of FEYReP cannot be told in a hurry, as there are scores of other interventions carried out by the NGO. Some of which include; provision of skills acquisition centres for the needy, Pregnacare targeted at expectant mothers to reduce infant mortality, provisions of reading materials and machines for the visually-impaired, production of FEYReP Garri, remodelling of regular markets into ultra-modern facilities and advocacy programmes for the girl-child: ‘Girls Uphold Your Dignity’ targeting the girl-child education, teenage pregnancy and other sundry anti-social practices; amidst a host of others.

Interestingly, the first lady says FEYReP funds these various intervention programmes through support and goodwill from good-hearted individuals and organisations as evident from some of the partnerships earlier referred to. Additionally, she said, as an NGO, FEYReP receives no allocation from the government rather, the co-ordinator goes out to source for funds from donor agencies from both within and outside Nigeria.

Emmanuel admitted that “without the moral support of the number one citizen of Akwa Ibom State, Governor Udom Emmanuel, I wouldn’t be able to do anything that I am doing”. For her, FEYReP did not just evolve because she is a first lady who must keep herself and her office busy or because she is a Martha. Caring, she said, runs in the family. She said: “The philosophy behind my pet project is just a passion I have for families and the less privileged. I grew up to see my parents doing what I am doing; helping families and the less-privileged. When I came here in 2013, when my husband was the SSG, I had the opportunity to visit some local government areas. There, I realised the level of poverty and decay in the families and I said to myself, what can I do?”

The rest, as they say, is now history. But, going by the successes which the first lady has recorded in just three years, she has converted what was a mere passion into a veritable tool for adding value to people’s lives in line with the poverty eradication and women empowerment (gender equality) of the United Nations Sustainable Development Goals (SDGs).