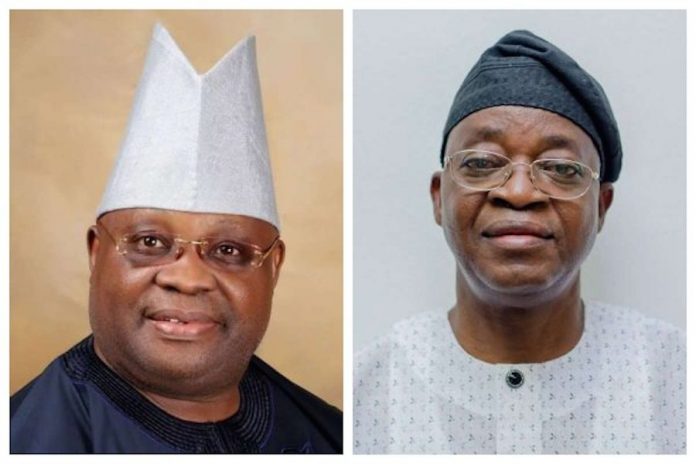 The African Democratic Congress (ADC) has accused President Muhammadu Buhari of leading a government of gangsters for accepting, instead of condemning the Osun State re-run election, which it described as a sham.

“The supplementary governorship election in Osun State was nothing but a sham. While hoping that this is not a pointer to what Nigerians should expect in 2019, it is now clear that the failed All Progressives Congress government will stop at nothing to subvert the people’s will,” the ADC said in a statement last night.

The ADC said, “If the President of the Federal Republic of Nigeria could come out to congratulate a winner in this kind of election, then his integrity is seriously at stake.

“We must stand up against a political party that has proved itself to be a party of gangsters, judging by reports trailing the last Osun re-run.”

It said the Osun debacle was, indeed, a desperate last resort by the ruling All Progressives Congress to retain power by all means after it had “failed to deliver on all its promises and has instead foisted untold suffering on citizens, while resorting to lies, bogus claims, witch hunting to cover up its gross deficiencies.”

The African Democratic Congress said it foresaw this when it inaugurated its Coalition for Electoral Integrity (C4e-Integrity).

According to ADC, “Every Nigerian must key into this coalition to detoxify our electoral environment and seize power from insensitive leaders.

“While we reject the outcome of the Osun fiasco in its entirety, we urge all Nigerians to stand firm and ensure that this does not happen again.”

The statement said, “At the main elections a week ago, the people of Osun had delivered a most damning verdict on the irresponsible, insensitive and profligate regime of the Rauf Aregbesola-led APC and had seized the opportunity to end years of wanton deprivation and suffering. But the APC has exposed its own disdain for democratic tenets by its shameful conduct at Thursday’s rerun.”

They also condemned the police for allegedly scuttling the process, stating that “the most tragic aspect of the entire charade was the odious role played by the police in sabotaging the entire process, with its conspiracy with the APC to prevent opposition supporters from voting.

“Indeed for the first time in the history of democratic elections in Nigeria, policemen deployed to provide security for the elections were said to have openly demanded that voters declare their political allegiance before being allowed into the voting area.

“The same policemen engaged in indiscriminate arrests of election observers and journalists duly accredited to cover the polls. There were ‘parades’ by policemen on the streets of Oshogbo who fired gunshots sporadically to scare voters.

“Even the Independent National Electoral Commission has distanced itself from the disgraceful conduct of the police.

“As if this was not bad enough, APC thugs in their numbers took over the polling units, forcing many opposition supporters to keep their distance for fear of injury or worse. In some cases, thugs fired gunshots to scare away voters.

“The same set of thugs had driven many prospective opposition voters from their homes in the dead of the night and PVCs seized in Orolu.

“While the APC may be patting itself on the back for a job well done, it is the larger population of Nigerians that are the ultimate losers, having witnessed a full reversal of any gains we might have experienced since the return of democracy in 1999,” the statement said.