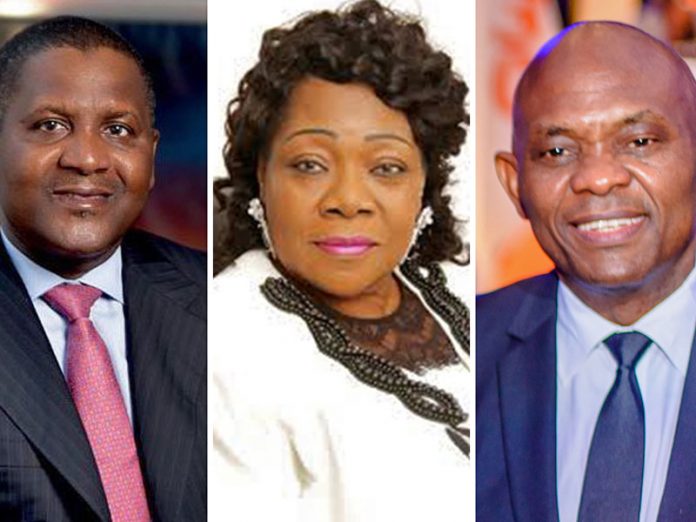 For deepening the nation’s capital market through the listing of their companies on the Nigerian Stock Exchange (NSE), Alhaji Aliko Dangote and Mr. Tony Elumelu will be recognised by the Capital Market Correspondents Association of Nigeria (CAMCAN) on Saturday, September 29, 2018 in Lagos. The recognition will come under the special individual recognition award for market development category of the maiden edition of the CAMCAN Nigerian Capital Market Performance Awards (CNCMPA).

According CAMCAN, the listing of these companies has contributed to the depth of the market, providing investors with regular income. Hence, the decision to honour these two entrepreneurs.

Besides, past directors general of Securities and Exchange Commission (SEC) and

Nigerian Stock Exchange (NSE) will be given special awards on that day as well. The association cited the contributions of Professor Ndi Okereke-Onyiuke who transformed trading on the NSE from manual to automated system.

It also cited Sullyman Ndanusa, whose tenure as SEC DG saw the introduction of the Investment and Securities Act(ISA).

The association said the awards were also introduced to recognise companies with best profitability, efficiency, return on investment, among others.

The awards, according to a statement by the association, were based on‎ verifiable data derived from audited financial reports of quoted companies for the year ended December 31, 2017 and March 31, 2018. The data was collated with the support of analysts at Investdata Consulting Limited.

“Although the Nigerian economy was in recession for major parts of the period under review, majority of the quoted companies distinguished themselves, hence the need to celebrate them,” the statement added.

The awards, according to CAMCAN, will be an annual event in her calendar, as a way of encouraging companies to performance optimally in the interest of their investors and other stakeholders.

Commenting, Chief Research Officer of Investdata Consulting Limited, Mr. Ambrose Omordion said: “Companies were selected for recognition for being the most profitable, efficient, offering the best return on investment, most improved, price/book value and dividend yield.”

According to him, companies were considered across sectors like: Banking, Insurance, Oil/Gas, Consumer Goods and Industrial Goods; after which the best from each sector in the various categories were recognised separately as best for the entire market in that particular category.