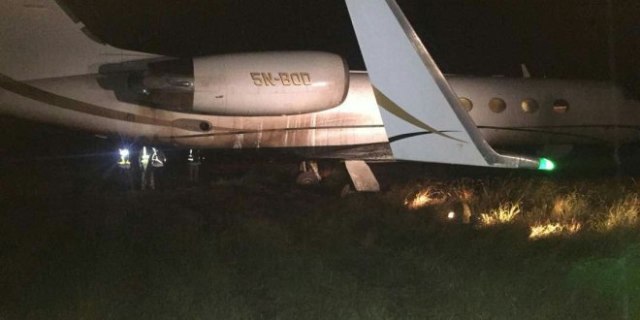 The Accident Investigation Bureau (AIB) has explained that the Gulfstream G IV operated by Skybird Airline, which overshot the runway Wednesday night at the Nnamdi Azikiwe International Airport, Abuja, was caused by heavy downpour that waterlogged the runway.

AIB said the pilot of the flight was not aware of the intensity of the rain and attributed the cause of the incident to the wrong rain forecast by the Nigerian Meteorological Agency (NiMET).

AIB in its preliminary report released to journalists yesterday said that the rain on landing was heavier than the advised slight rain by the authorities.

The aircraft with the registration number 5N-BOD had overshot the runway at 2200hrs and moved to the muddy area of that aspect of the airport.

AIB said at the time of the incident the aircraft had one passenger onboard with five crewmembers.

A statement by the General Manager, Public Affairs, AIB Tunji Oketunbi also said that on touchdown, the aircraft did not slow down as normal.

He, however, said that when this happened, the captain deployed the speed brakes manually, and applied maximum braking, but it was too late from preventing the aircraft to overshoot the runway.

The statement read in part: “The rain on landing was heavier than the advised slight rain and on touched down; the aircraft did not slow down as normal. At that time, the captain deployed the speed brakes manually, and applied maximum braking.

“However, the deployment of thrust reversers could not stop the aircraft on the wet and slippery runway. The aircraft exited the end of the runway and came to a stop in a mud; at a distance of 71m from the end of RWY 22 stop way.”

Oketunbi emphasised that no injury was sustained by the passenger and the crew on board when the aircraft finally halted.