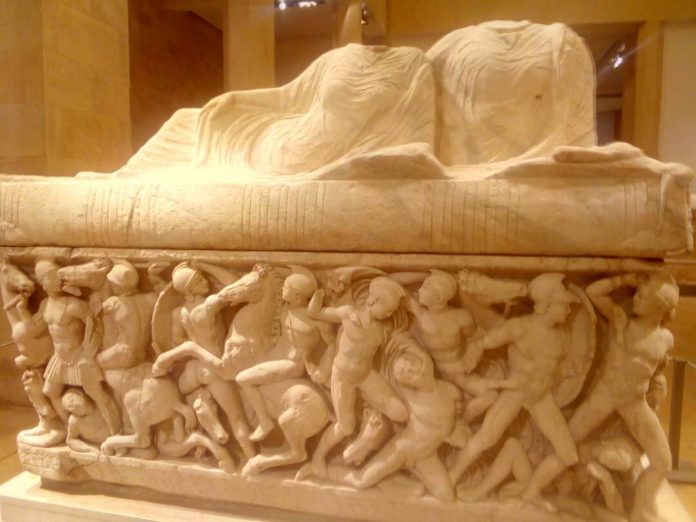 As the world gradually recovers from the shuddering news of Brazil’s 200-year old National Museum in Rio, which was consumed by fire, the silver lining seems to rest in the National Museum of Beirut, Lebanon, for world’s preservation of arts andartefacts. Yinka Olatunbosun reports

The global media had saturated our screens with images of some members of the academic community in Rio weeping; some protesting after Brazil’s once enviable archive of 20 million pieces of artefacts representing Egypt, Greco-Roman periods and more were reduced to ruins in an inferno that razed down the 200-year-old National Museum.

But on the Eastern Mediterranean, the National Museum of Beirut holds a collection of magnificent historical pieces that represent the art forms across different world civilisations. Given the Brazil example, it was only natural to check the ceilings for smoke detectors on entry, which was a sort of visual assurance that the pieces on display are secured.

Though the museum offers no historical narrative, the recovered items articulated a tale of how the Lebanese had carefully documented history through the eclectic art forms and archeological details. Some of these pieces dated as far as the Persian, Hellenistic and Roman periods from big statues to tiny figurines.

Profound cultural statements are made through the arrangement of the reliefs and religious iconography spurred by Pharaoh’s gifts to city princes and by offerings to local gods.

With a view to discovering much of the archeological sculptures, the Wole Soyinka Foundation in collaboration with the Faculty of Humanities, Notre Dame University, as well as Cedars Institute, selected 10 Nigerians including journalists to experience the untold story of the place of Lebanon in World History through its annual Study Abroad in Lebanon (SAIL).

It is an initiative sponsored by Habib Jaafar. The visit to the National Museum was one in the series of tours across the country through the 12-day intensive programme.

Right on the first floor, a sprawling view to a darkened room awaits the visitor.

Usually, no one likes to be left alone in this particular room that houses the mummies of Assi El Hadith recovered from the Qadisha valley. They looked real and perhaps capable of triggering fear in anyone with either a very wild sense of imagination of resurrection or the thought of one of the mummies grabbing his shoulder on the way out of the room.

The tombstone of the Ottoman period was also seen in rectangular slabs with motifs ornamented with cypress andhyacinth stems, dating back to 18th century. In marble, there is the sarcophagus of the battles between the Greeks as well as the legend of Achilles.

Still at the Upper Gallery, a visitor will find the statuette of a god in bronze, figurines of gods and ex-votos wearing a helmet and a loincloth. Some of the masks derived from the Greek theatre masks were found on the east side of the top floor with grinning features typical of comedy or pathetic features that characterised the theatrics of the period.

Astarte is represented by the winged sphinx sculpture on each side of the theme while just ahead of the piece, there is a mosaic piece illustrating the abduction of Europe by Byblos found in 3rdcentury A.D. and a very large one, reasonably so, which depicts the Birth of Alexander, recovered from Baalbek. Other pieces include statues from the Roman period and funerary stele cast in limestone dating back to the Neolithic period.
And arguably, one of the most important cultural claims by the Lebanese to being instrumental to global literacy is embodied in the tablet containing the Phoenician inscriptions which represent the writing revolution in the 1st Millenium with the invention of 22 consonants in the alphabets.

On the economic plot to the Museum story, loads of souvenirs with some replicating the motifs or artefacts contribute to earning a return on this cultural investment by the state.

As all the world’s civilisations are preserved through this delightful collection in Beirut, it is expected that tourists and art connoisseurs find pleasure in situating a visit to this museum in future plans or be inclined to join the movement to echo the unbecoming state of our National Museum in Onikan, amongst other things.