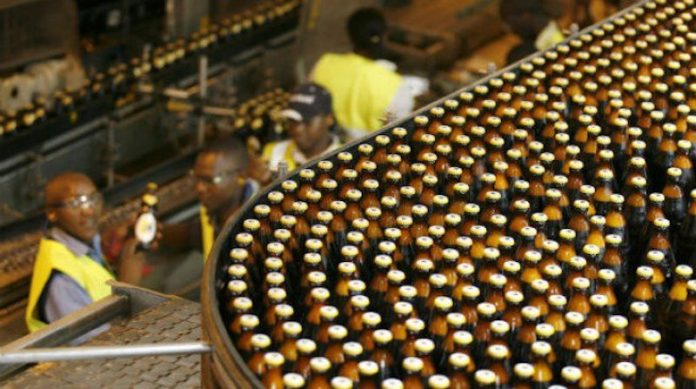 For some years, the ability of Guinness Nigeria Plc to deliver improved bottom-line was affected by high cost of servicing its borrowings from banks. While the company kept on expanding and introducing new products to remain competitive, it funded its operations mostly relying on debts at a very high cost.

By the half year ended December 31, 2016, Guinness Nigeria’s net debt to equity ratio had hit 103.9 per cent, which was a sign that the brewing firm was highly leveraged. And market analysts stressed that the way out for Guinness Nigeria was to inject equity and reduce the level of debts.
The company heeded this advice and approached existing shareholders to inject N39.9 billion into the company last year. The full year results of the company released last week showed the benefits of the rights issue.

Full year financial performance
Guinness Nigeria Plc has reported a growth of 249 per cent in profit after tax (PAT) for the year ended June 30, 2018. The audited results showed revenue of N125.9 billion, up by 14 per cent from N125.92 billion in 2017. Net financing expenses fell 54 per cent to N3.443 billion, from N7.527 billion following the rights issue of last year.

Commenting on the results, Managing Director/CEO, Guinness Nigeria Plc, Baker Magunda, said: “Over the year ending 30 June 2018, despite continued challenges in the operating environment, Guinness Nigeria delivered a strong performance. Revenue increased by 14 per cent as both beer and mainstream spirits’ net sales grew double-digit. In beer, Guinness, our largest brand, saw strong growth as it benefitted from increased marketing activations around football. Mainstream spirits also delivered double-digit growth driven by innovation launches and new formats.”
“During the year, gross margin was down four per cent to 34 per cent largely driven by inflationary pressure on our raw material costs. However, this was more than offset by reduced distribution and administration costs and resulted in operating margin improving 130bps. Marketing spend increased 18 per cent, ahead of revenue growth, as we continue to invest behind our brands.”

“Improved operating performance combined with lower finance charges have helped us deliver an overall PAT increase of 249 per cent during year. The execution of our strategy is working as we delivered both top line growth and margin expansion while also increasing investment behind our brands. Looking forward, we will continue to focus on the three strategic pillars of productivity, expansion of our portfolio, as well as the execution of the commercial footprint initiatives to drive the business forward. Whilst we remain optimistic about the execution of our strategy, we note that the operating and competitive environment is likely to continue to be challenging in the 2019 financial year.”

Magunda explained that the execution of the company’s strategy is working as it delivered both top line growth and margin expansion while also increasing investment behind its brands. “Looking forward, we will continue to focus on the three strategic pillars of productivity, expansion of our portfolio, as well as the execution of the commercial footprint initiatives to drive the business forward. Whilst we remain optimistic about the execution of our strategy, we note that the operating and competitive environment is likely to continue to be challenging in the 2019 financial year,” he added.

In his comment, Chairman of Guinness Nigeria Plc, Mr. Babatunde Savage said Guinness Nigeria has confidence in the Nigerian economy and would remain a major player in the country by continually investing, developing capacity and growing a portfolio that most suit the consumers’ needs for celebration and relaxation.
He said: “Our aim is to continue to add value to Nigeria not only through continued investments in local manufacturing and backward integration, but also through various Sustainable Development projects, enabling job opportunities and economic inclusion.”

“As a board, it is heartening to see the impact of the rights issue coming through in the profitability of the company. The Board is confident that we are making the right investments in the company to ensure our long term competitiveness, and continues to support the management in its efforts to build a business that aims to consistently deliver growth for all stakeholders.”

Impact of the Rights Issue
Guinness had said the utilisation of the rights issue proceeds leading to significant reduction of the Diageo loan and other borrowings, has resulted into a 32 per cent reduction in the net finance charges and improved our debt to equity ratio from 82 per cent to two per cent.

During the offer, the then MD of Guinness Nigeria, Mr. Peter Ndegwa had said it would deleverage the company’s balance sheet and reduce finance costs.
He noted that the company obtained a loan from Diageo in 2016 to manage foreign exchange related obligations, saying that between 2015 and 2016 obtained loan facilities from various financial institutions to fund working capital requirements and business expansion operations.

Ndegwa said: “This rights issue will allow the company to deliver on its strategic objectives and give all our shareholders a unique opportunity to increase their shareholding in the company. Our expectation is that funds raised will help mitigate the impact of increasing finance costs, optimize our balance sheet and improve the company’s financial flexibility.”

According to him, the devaluation of the Nigerian currency, foreign exchange scarcity and volatility, higher interest rates, a decline in real gross domestic product(GDP), weak financial markets and increase in cost of imported raw materials impacted on the company’s performance, over recent years.

“We have embarked on a number of restructuring initiatives in order to return the company to profitability. For example we have increased sourcing of our raw materials locally, deepened our partnerships with local distributors, reduced prices to grow volumes and gain market share, enhanced operational efficiencies and broadened our product portfolio to meet consumer preferences amongst others. We believe the capital injection rights issue will help the company to deliver on our strategic objectives and give all shareholders a unique opportunity to increase their shareholding,” he stated.

According to the analysts, the operating environment is expected to remain challenging, and competition intense in the near term.
“Management shares this view, but is confident that its strategies are yielding the desired result. We still expect earnings per share (EPS) to grow in 2019E, but have revised estimate lower,” they said.
They cut their target price(TP) but maintained their sell rating of the stock of Guinness, saying the stock has lost 15 per cent since they last updated in April with SELL rating.

“We cut our TP lower to N70.91 per share (previously N73.75 per share) and maintain SELL on 16.6 per cent downside, including our estimated dividend yield of three per cent. While noting that equities have broadly been bearish YtD, we attribute part of Guinness’ share price decline to investor reaction to the unimpressive H2-18 earnings (-31 per cent PAT vs. H1-17). On our revised estimates, the stock is trading at forward (2018E) P/E and EV/EBITDA multiples of 21.3x and 8.0x, a discount to its five-year historical averages of 33.1x and 9.3x respectively,” the analysts said.

According to Cordros Capital, the management said that about 70 per cent of the revenue growth in 2018 was on volume, driven by accessible beer and malt, as well as mainstream spirits.
“We forecast 10 per cent revenue growth in 2019E, and expect volume will gain support from the stronger commercial and route to market (RTM) activities we have observed with Guinness, including portfolio expansion/extension and the reversal of earlier price increases,” they said.

However, the analysts said they are conservative on margins, leaving their gross margin estimate for 2019E at 34 per cent , unchanged vs. 2018FY.
“In our view, both the cost environment and competitor price actions offer no positive outlook for gross margin in the near term. And we see little-to-no impact on margin from volume mix, as we expect assessible brands will continue to drive most of Guinness’ volume performance. On competition and margin effect, it is instructive to note that even the market leader has resolved to taking the full hit of the excise tariff hike,” they said.

Also, compared to previous estimate, the analysts cut EBIT margin lower by 90 bps to 9.5 per cent.
“We raise estimate for opex-to-revenue ratio to 25 per cent (previously 24 per cent), reflecting the negative surprise in Q4-18 –which impacted earnings the most during the period and expected higher spend on commercial activities and RTM in support of our volume outlook,” he said.