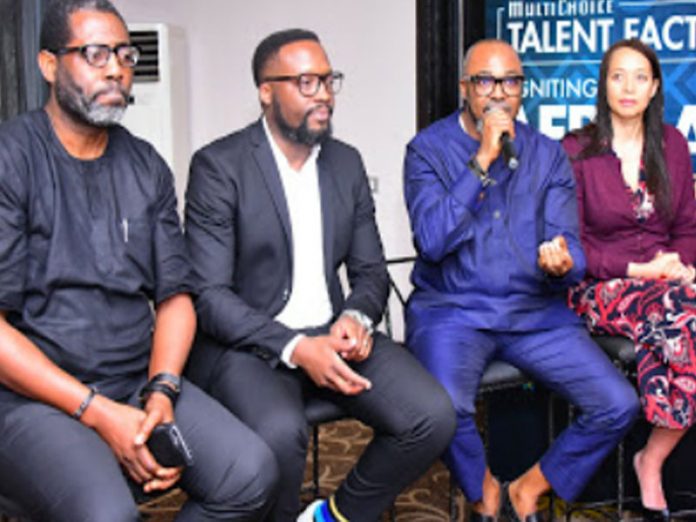 Africa is rich in history and culture. Bit the inability of some Africans to identify with their rich history has led to cultural misappropriation by foreigners. However, times are changing and a new breed of story tellers and producers are emerging to tell the African story.

The need to tell such African stories gave rise to the MultiChoice Talent Factory (MTF). MultiChoice says the initiative is as an indication of the company’s commitment to growing and developing the African creative industry.

At a recent press brunch hosted by MultiChoice on the eve of the sixth Africa Magic Viewers’ Choice Awards (AMVCA), to engage with Pan-African media and stakeholders on their role in creating shared value for the industry, the company said they were investing in local content while igniting the future of Africa’s creative industry through MTF.

In his remarks, Ugbe said that the MTF was established to ensure better production of African stories, which will not only resonate with Africans but also with audiences around the world, because there is a need to take African content to the rest of the world.

Echoing similar sentiments, Phahle said the MTF is MultiChoice’s way of contributing to the countries in which the company operates, as well as a way of magnifying the opportunities for African storytelling, adding that the world is ready to embrace African storytelling in an unprecedented way.

On her part, Cheryl Uys-Allie, Director, MultiChoice Talent Factory, explained that the initiative is about developing the skills of local filmmakers and the growth of the local film industries. She explained that the initiative was launched in May 2018 in Nigeria, Zambia and Kenya, the three countries that will host the MultiChoice Academies. Each academy she said will provide 20 students with a full-year academic programme in various aspects of filmmaking. The 60 students, who resume in October, were selected from 3,108 applicants from across the continent.

Berry Lwando, Academy Director, Southern Africa, explained that the selection was done in conjunction with experts in local film industries.

In an earlier release sent by the company, the MTF Academy said the candidates were chosen after a two-month long process of shortlisting candidates from over 3,000 entries from Nigeria and Ghana, adding that this was followed by a rigorous interview and adjudication process by a group of film and television industry experts and MultiChoice regional Academy Director, Femi Odugbemi.

The Ghanaians that made the cut include Edmund Kobby Asamoah, Henry Konadu Denkyira, Irene Dumevi Yaamoakoa and Patience Esiawonam Adisenu.

They are all expected to represent the West African region at the Nigeria-based MTF Academy from 1 October, during which MultiChoice will sponsor the students’ tuition, accommodation and stipend for the duration of their training in each academy.

Ugbe said, “As a company that is deeply rooted in Nigeria, we understand that many young, aspiring filmmakers have the capacity to learn and strengthen their skillset to give back to their communities, but may not be financially equipped to do so.

“The MultiChoice Talent Factory focuses on making sure that those gems are nurtured, and their talents developed to contribute meaningfully to Africa’s creative industry.”

The students will be provided with skillsets to develop their talent, connect with industry professionals and tell authentic African stories through a comprehensive curriculum comprising theoretical knowledge and hands-on experience in cinematography, editing, audio production and storytelling.

“From the thousands of applications received, it’s evident that there’s a strong desire to learn from and work with other African creatives. Not only will the MultiChoice Talent Factory be a springboard to a career in the entertainment industry, but it will also create a closely-knit community of African professionals with a willingness to narrate Africa’s stories to the world,” said Odugbemi.

During the programme, the students will produce television and film content that will be aired on local M-Net channels across the MultiChoice platform including Africa Magic, Maisha Magic East, Maisha Magic Bongo, Zambezi Magic, M-Net and SuperSport to reach African audiences on the DStv and GOtv platforms.

Upon graduation from the academy, the students will leave with the knowledge and skills to contribute professionally to Africa’s film and television industry.