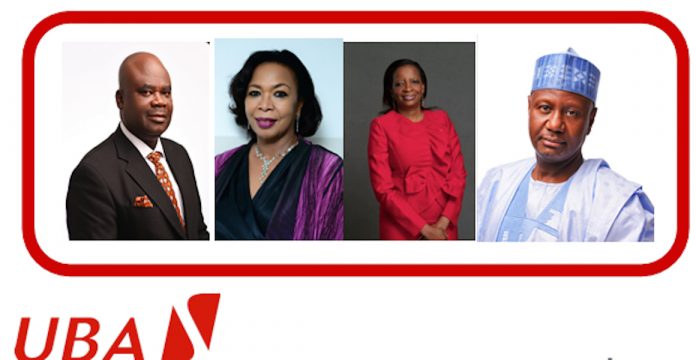 The Board of Directors of the United Bank for Africa (UBA) at the weekend announced the appointment of four new members to its board.

The bank, however, explained in a statement that the appointments are subject to the approval of the Central Bank of Nigeria (CBN).

The Group Chairman of the bank, Mr. Tony Elumelu, welcomed the new board members saying, “I am pleased to welcome Erelu Adebayo, Angela Aneke, Abdulqadir Bello and Kayode Fasola to the Group Board.

“These men and women bring a wealth of experience in their fields and will be tremendous assets, as we deliver on our mission to become the leading Pan-African financial institution in all our countries of operation.

“I am particularly pleased that two of the newly appointed non-executive directors are women, bringing the total number of women to four, a further demonstration of our commitment to ensuring equality for both men and women.”

Elumelu thanked the retiring directors for their contribution, hard work and commitment to UBA.

“I would like to express my appreciation to our retiring Directors for their leadership and dedication to UBA and for their contribution to an already impressive 2018. I wish them the very best in their future endeavours,” he said.

The announcement came on the heels of the bank’s strong first half 2018 performance with a profit before tax of $58.1 billion.

With the successful expansion of its retail operations, UBA now operates in 20 countries in Africa, following its recent acquisition of a licence in Mali and the United Kingdom.

The bank also has offices in New York City and in Paris.

The profile of the new directors showed that Adebayo, who graduated with an M.Phil in Land Economy from Cambridge University, is the former First Lady of Ekiti State in Nigeria.

She is a council member of the Nigerian Stock Exchange and has worked extensively on real estate development and she is the Chairman of the Erelu Adebayo Foundation for the under-privileged.

Also, Aneke is a board advisor, banker and a strategic thinker with over 30 years experience in financial services, in the areas of financial control, strategy, transaction banking, corporate banking, retail banking and governance.

She has held executive management and board positions in several international and regional institutions, including Ecobank Transnational Incorporated and the United Bank for Africa.

Fasola previously served as an Executive Director of a commercial bank in Nigeria. He holds two MBAs and is pursuing a PhD in Business Administration.

Also, Bello, a Chartered Accountant, has over 30 years’ corporate experience in the banking sector, during which period he held several senior management positions in various Banks.

He also previously served as the Group Chief Credit Officer of UBA and thereafter as the Executive Director in charge of Risk Management for UBA Group.

UBA is a leading pan-African financial services group, with presence in 20 African countries, as well as the United Kingdom, the United States of America and France.

It was incorporated in Nigeria as a limited liability company after taking over the assets of the British and French Bank Limited who had been operating in Nigeria since 1949.

The bank merged with Standard Trust Bank in 2005 and formed a single country operation founded in 1949 in Nigeria – Africa’s largest economy.

UBA has become one of the leading providers of banking and other financial services on the African continent.

The bank provides services to over 15 million customers globally, through one of the most diverse service channels in sub-Saharan Africa, with over 1,000 branches and customer touch points and robust online and mobile banking platforms.