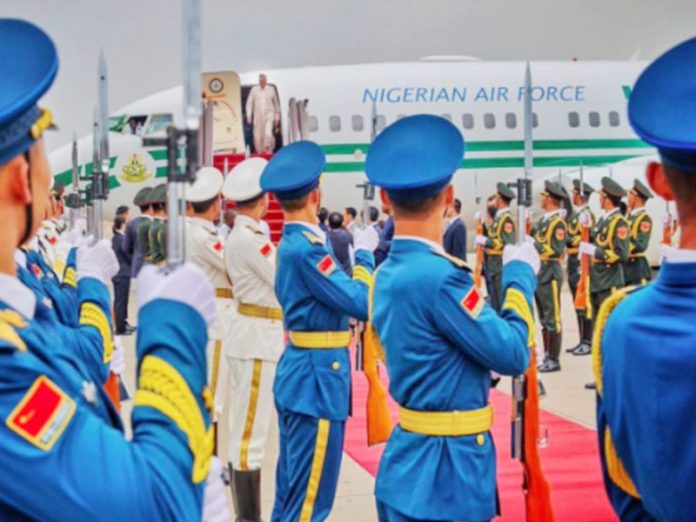 The Presidency saturday in Beijing, China, boasted that world leaders were now queuing to meet President Muhammadu Buhari, an experience, it said, showed there was something unusual about him. This is coming on the heels of visits to Abuja by British Prime Minister, Theresa May, and German Chancellor, Angela Merkel.

Answering questions from journalists in Beijing over the accusation by United States President Donald Trump that Buhari was lifeless, Senior Special Assistant to the President on Media and Publicity, Garba Shehu, said the presidency had resolved not to react to the allegation.

Shehu said besides the president being an uncommon leader, there was also something special about Nigeria, arguing that the current trend is a departure from the past when world leaders avoided Nigerian leaders. He said the change came about in the last three years and challenged Nigerians to appreciate the situation as a major development.

That was as Nigeria and China readied to sign a $328 million agreement on National Information and Communication Technology Infrastructure Backbone Phase 11 (NICTIB 11) in Beijing as part of Buhari’s on-going visit to China. The agreement, to be signed by Galaxy Backbone Limited on behalf of Nigeria, and Huawei Technologies Limited (HUAWEI) on behalf of China, is a facility provided by the Chinese EXIM Bank.

Shehu told journalists in Beijing, “You know that as a policy, we said that we are not going to answer the American president. However, the fact that the entire world and world leaders are queuing up to meet President Muhammadu Buhari is an indication that there is something about President Buhari. There is something about the Nigeria he now leads that the world likes.

“I think that Nigerians themselves should better look at this from this positive point of view. It is a major development. We had situations in the country in the past where key world leaders didn’t want to meet our own leaders. All of that has changed in the last three years.”

Speaking on the summit of the Forum on China-Africa Cooperation (FOCAC) holding on September 3 and 4 in Beijing, which Buhari is in China to attend, Shehu said Chinese funding of projects in Nigeria had doubled since the president came on board.

He added that with the 2018 FOCAC summit, Nigeria hoped to take more opportunities back home.

The president’s media aide added, “You know that from the last summit in South Africa, the Chinese financing of projects in Nigeria has more than doubled under President Muhammadu Buhari and so, we expect that if the same momentum is maintained, we hope that going forward, all of the projects that are outstanding, like the Kaduna-Kano rail project, the coastal rail scheme, Mambilla power project, the second phase of the Nnamdi Azikiwe International Airport expansion project, Lagos, Port Harcourt, Abuja, Kano and all of these projects, they will move more steadily, and thankfully, we have virtually everyone who matters on our own side.

“So, we hope that whatever is left, the dotted lines will be signed, and we are hoping that we will take back with us quite a number of schemes that will take Nigeria forward.”

The signing of the $328 million agreement, which will be witnessed by Buhari and his Chinese counterpart, Xi Jinping, is part of the activities slated for the 2018 FOCAC Summit.

Buhari arrived Beijing yesterday about 9:04am Nigerian time for a six-day official visit and was received by top Chinese government officials, including the Chinese Ambassador to Nigeria, Dr. Zhou Pingjian.

In a statement yesterday, Shehu said the Chinese EXIM Bank facility was meant for the development of NICTIB 11 project, which he said was consistent with the current administration’s commitment to incorporating the development of ICT into national strategic planning under the National Economic Recovery and Growth Plan (ERGP).

He also said Buhari and his Chinese host would witness the signing of memorandum of understanding (MOU) on One Belt One Road Initiative (OBOR), recalling that in 2013, the Chinese leader proposed the initiative of building the Silk Road Economic Belt and the 21st-Century Maritime Silk Road with a view to integrating the development strategies of partnering countries.

“During the high-level dialogue between Chinese and African leaders and business representatives on the margins of FOCAC, the Nigerian delegation is also expected to sign no fewer than 25 MOUs, including those proposed by the Nigerian Investment Promotion Commission (NIPC), Nigerian National Petroleum Corporation (NNPC), and Nigerian Association of Chambers of Commerce, Industry, Mines and Agriculture (NACCIMA),” Shehu stated.

The statement also said Buhari would today meet Nigerians living in China ahead of the FOCAC meeting tomorrow when he will join Jinping and other African leaders at roundtable sessions that will essentially discuss the report of FOCAC since the 2015 Johannesburg Summit, including the implementation of the “ten cooperation plans” adopted at the last meeting.

The statement added that the summit would adopt the Beijing Declaration and Action Plan for the development of China-Africa cooperation and fashion out new opportunities to grow Nigeria-China comprehensive strategic partnership from 2019 to 2021.