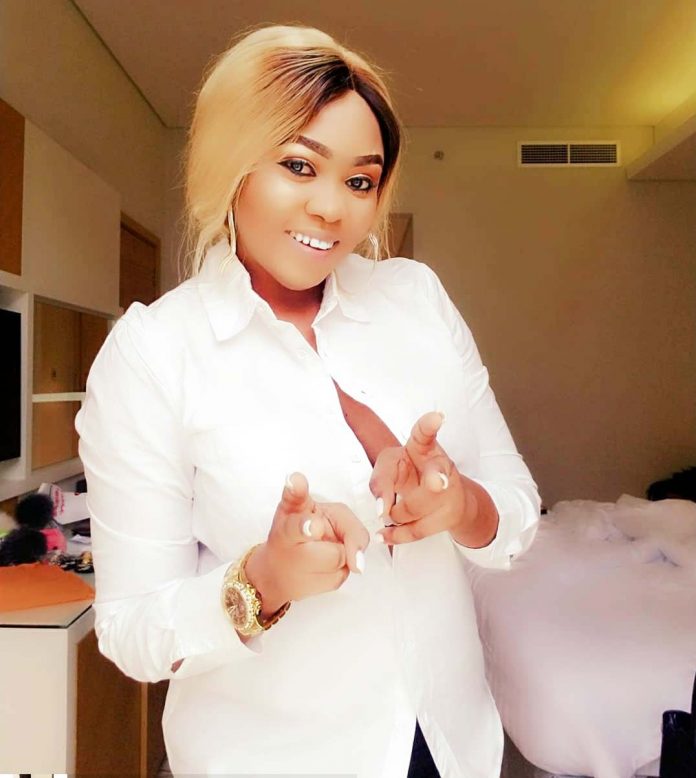 Folorunsho Adeola, popularly known as Arikegold, is one of the stunning actors in the Yoruba segment of Nollywood with over 70 screen credits. Her soft and easy-going nature endears her to a booming audience of Yoruba movies. Though very admirable on screen, Arikegold made her breakthrough in the industry as a producer. Her journey to stardom was without scars. She relates her experiences and airs her views on issues often of concern in Yoruba movies to Chinedu Ibeabuchi

Was it passion that drove you into acting?

I have always had passion for entertainment since I was young. I never knew I would end up as an actor. I thought I would be a broadcaster.

Some Yoruba actors also act in English movies while some are just comfortable in Yoruba movies alone. Where do you stand here?

I don’t think there is anything like to and fro in the movie industry. Whenever a good director sees and loves your job, he or she will contact you and ask if you are available to feature in his movie. I believe as an actor, you should be versatile, whether in English or Yoruba movies.

What role can you never act even if offered N10 million?

As a professional in my field, I can’t reject any role. I take a role and interpret it so well in a way that passes the message across to my fans. So if you offer me N10 million or not, I can play any role but I can’t expose my body for any amount.

What’s that childhood or growing-up experience that you can never forget or shaped you?

Growing up wasn’t easy for me especially having to move from one place to another and changing schools each time we relocate. It wasn’t easy at all. Only people in my shoes will understand better how a polygamous family looks like. On the other hand, there was a good side to it. I was able to learn about the strength you can get from a close family. I learnt to be strong even in bad times, to keep my head up, to be focused in everything I do, to be self-reliant and how to doggedly fight for my future. So, growing up was so hard for me but I thank God for today.

What are some of the notable movies or series you have featured in?

I have featured in more than 70 films. However, it’s not how far but how well. I thank God for today.

Which movie took you to a breaking point in the industry?

I will say the movies I produced. Everything changed the moment I started producing my movies. But all the movies I featured in were fantastic. One spectacular one that I can’t forget is Alubarika.

Yoruba movies are often criticised for fetishism, cultism and repetition of storylines. What’s your defense on these?

Laughs! Very funny how people tend to criticise our movies. Anyway, we create a narrative around what happens in human society and then use it to relate with our fans. You will be in denial if you say a large proportion of what you watch in our movies aren’t a reflection of what happens in the society. A good number of our movies are intended not only to entertain but teach moral lessons.

When not acting, what do you do? And how do you relax?

To what extent can you go acting romantic scene? Kiss, nude or sex? And why?

I can only kiss to an extent but I cannot have sex or go nude on set because of my cultural background. I am going to get married one day and have my babies and I don’t want my children to grow up seeing something like that.

Do you have a role model?

Yes, Omotola Jalade, Omoni Oboli and Bimbo Oshin are my role models. I admire them because they have been able to manage marriage and career successfully, and yet, are highly relevant in the industry.

Is Yoruba movie lucrative? Would you say it is career fulfilling?  What’s your view about some actors living above their means?

People always see it from the angle of our movies but don’t equally know that most of our ladies in the industry have their own personal businesses; that they have a second income aside acting. So, when you see most of these actresses flaunt cars, money and houses on social media, it means they have really worked hard to achieve it and should be praised rather than saying all sort of malicious things against them. And mind you, there’s money in movie business also. Meanwhile, there are those who act for the passion while others take it as a career. People are making money from acting but before you start making money from it, you need to love it first and study how you can earn a living from it.

Have you ever been embarrassed by a fan in public? How did you handle this?

Laughs! Yes, I was once embarrassed by a fan in Ibadan but it was funny though. I actually came down from my car to buy fuel thinking no one would recognise me. From nowhere, a fan shouted ‘ArikeGold.’ I was scared and wanted to run away thinking it was a kidnapper. To my greatest surprise, it was a fan who wanted to be sure that it was ArikeGold.

How would you describe your personal style?

I wear anything I’m comfortable in and I can’t expose my body in the name of fashion.

We realised that you are engaged. Who is the lucky man?

Yes, I am single.

Do you fancy marriage or see it as distraction?

I don’t really want to say anything about that. I can only put everything in GOD’s hand.

How would you describe your ideal man?

Can you marry an actor?

Who is your Nollywood crush and why?

I don’t have crush

The industry is rife with sexual harassment. Many have shared their sordid tales. Can you share yours? And how do you navigate around this?

I think it’s a matter of choice. If you believe in your talent, work very hard and keep your head up, be focused and pay your dues, I believe you will go a long way. I can only talk about what I have experienced and I can authoritatively say that I have not experienced such since I came into the industry in 2007. To state it clear, I have never been sexually harassed in my career.

Any nomination or notable award as an actress?

I have a lot of nominations and few awards.

Yoruba movie industry is still emerging. In your opinion, what are the plugs that still need to be fixed?

I think we should, at least, be appreciated. Nollywood is Nollywood (whether English or Yoruba movie). They should stop looking down on us like we are not working hard. We are really working very hard. I want to beg our fans and social media critics to stop the bullying.