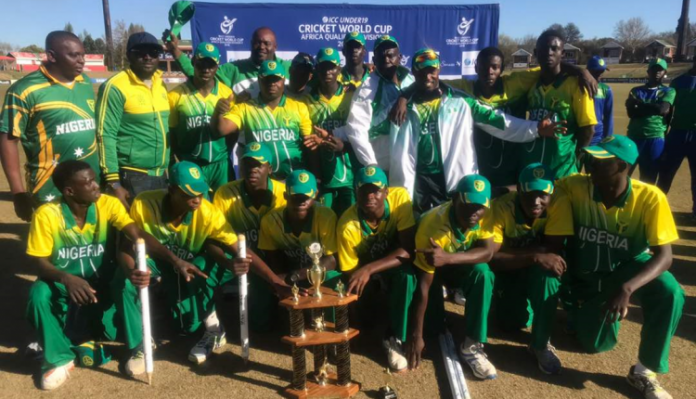 The win further sealed Nigeria’s place at the ICC Africa Division cadre along with a World Cup space in 2020.

He congratulated the Coaches led by Mr. Uthe Ogbimi and Tamuno John for prosecuting a successful outing.

“The boys were very dedicated and were disciplined all though the stages of the event. It is not time to celebrate because we have Division One Qualifiers, Inter Continental Qualifiers before the World Cup Proper where we would face countries like England, India, Pakistan, South Africa and other top nations”, he said.

“The victory is a testimonial to the plans outlined by the present board when we took office last year and we are glad they are beginning to yield. What is next is to step up other developmental agenda in this respect.” He added.

The Junior Yellow Greens convincingly defeated Mozambique, Lesotho and Ghana in Group B to go unbeaten before dispatching Tanzania by 35 runs in the Semi-final, which earned the team the ticket to the much touted match against Sierra Leone book who also saw off the challenge of Mozambique by 71 runs.

The Captain Sylvester Okpe side batted first scoring 242 runs for loss of 9 wickets in 50 overs with standout performer being opening batsman Olayinka Olaleye, posting 110 runs off 124 balls, Samuel Mba 62 runs and hero of Semi Final SegunOgundipe who added 29 runs in a high scoring.

Nigeria’s best bowler at the tournament Peter Aho led the onslaught by claiming 5 wickets, 35 runs, 1 maiden in 4 overs while the duo of Mohammed Taiwo and Abdulrahman Jimoh both claimed 2 wickets to reduce their opponents to a paltry 105 runs all out in 31 overs.

The Sierra Leoneans in response to the intimidating scores Nigeria recorded in the first innings found it difficult to cope in the batting crease but the likes of Captain George Ngeba (31), Osman Sankoh and Emmanuel Akpo both had 14 runs while Haroun Kamara added 13 runs in a disappointing effort from the side that waltzed through every opponent up until the moment they met Nigeria in the Final.

Nigeria (Champions), Sierra-Leone (Runners-up) and Tanzania (Third Place) have all qualified from ICC Under-19 World Cup Qualifier Division Two to Division One where they would be facing countries such as Namibia, Kenya and Uganda.