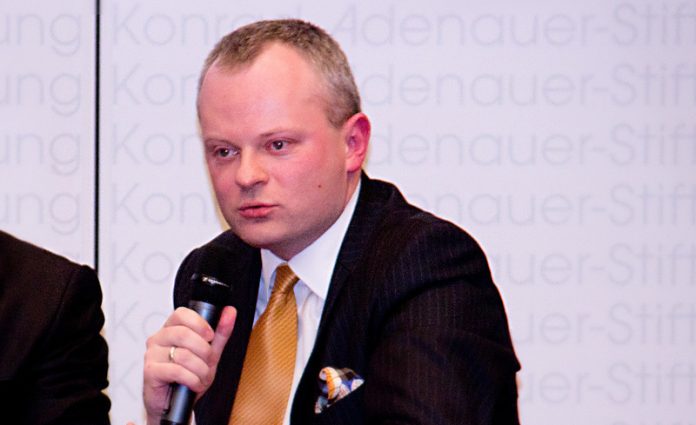 As the German Chancellor, Angela Merkel, visits Nigeria this week, the Chairman of the German-African Business Association, Dr. Stefan Liebing, has urged the Nigerian
Government to “speed up its reform actions” in order to boost trade relation between the two countries.

This is even as he lauded the steps currently taken by the federal government to change the country’s narrative.
Liebing stated this in Berlin, during an interview on Arise Television, a sister broadcast station of THISDAY.
“I strongly believe Nigeria is on a very good path,” he said. According to him, the level of German investment and trade with most African countries has slowed down in the past four years.

He attributed the decline to various reasons such as the decline in crude oil and other commodities prices, and the German business’ hesitant posture to African countries, caused by ownership of businesses by potential investors running “family-owned medium sized businesses, rather than large state-backed corporates, among others.

However, Liebing affirmed that the trend would change, saying Germany had for the first time ever overtaken France as Africa’s most important trade partner.
He said companies in the German-African Business Association (Afrika-Verein) were considering investment of more than $1 billon in Africa in 2018.
This, he said, would be a 10 per cent increase of total investment, compared with the previous year.

He added: “Many of the larger German corporates such as Siemens,Volkswagen, Bayer, and many others, are expanding activities in Africa significantly. In order to convince many of the hundreds of thousands of German SMEs to follow, we will need a bit of support from German Government as far as guarantees, export credit insurance and financing means are concerned.

“But it will also help the government of Nigeria to continue its reform path at full speed. There is huge competition for German investment around the world and money will move where it finds the best and most stable, corruption-free framework.”

“First of all, I strongly believe that Nigeria is on very good path now. Reform has started in many areas, including the fight against corruption. Diversification of the economy away from what used to be heavy dependence on oil revenues is important also. And what maybe the most important development is that we are working with highly competent and motivated leaders from Government and business as we discuss and negotiate major projects between the two countries.”

Commenting further on the achievements recorded under President Muhammadu Buhari’s administration, he noted that security in the country has improved significantly, saying that was the first condition for investors to visit the country.
However, during Merkel’s visit, Liebing said he expects to see the signing of a couple of agreements between Nigeria and Germany to strengthen their bilateral relation.

“I hope to see as many agreements being signed as possible. We have quite a number of serious projects developed by some of the most reputable German corporates and we hope that we can bring them to

“It is my strong belief that we need to deliver a few pilot projects first. Once German investors have a proof that projects can be delivered quickly and successfully in a stable environment, I am sure many others will follow them on the way to Nigeria.

“So my wish for this visit is to push these pilot projects to success to the degree possible and make the meeting between the political leaders a starting point for a new level of business cooperation,” he added.

He stressed that the increase in activities and interest of Germans in almost all African countries would make the country renew its commitment and investment in Africa after the visit, noting that in the next five years, the number of German companies operating in Nigerian would have doubled.

“Chancellor Merkel has picked Ghana, Senegal and Nigeria for the visit both for their political importance in the region but also because they are strong economies that offer huge opportunities for joint investment, trade and development.

“As I said before, we believe that a 10 per cent increase of German investment in Africa should be possible this year. If Governments do their part and provide a stable environment and certain guarantees for investors, then I believe we can move to a 30 per cent increase by the end of 2021,” he added.