Although the Nasarawa State governor, Umaru Tanko Al-Makura has a grip on the political structures of the All Progressives Congress in his state, he seems to have difficulty choosing a successor from among his loyalists, reports Emmanuel Ukumba

While some governors were edged out during the All Progressives Congress’ recently held congresses, Nasarawa State governor, Umaru Tanko Al-Makura was able to consolidate his power base in the state.
He effectively retained his partyâ€™s structures in the state. With that, comes the power and influence to determine who succeeds him.

With over 14 aspirants jostling for the APC’s ticket, the race for the 2019 Nasarawa State governorship is already generating tension within the camp of the ruling party.

Al-Makura, like other governors in the country would, no doubt, want to determine who succeeds him among those who have shown interest under the APC platform come 2019.

Efforts by the aspirants to position their loyalists in strategic positions during the recently conducted wards, local governments and state congresses of the APC failed as the governor outmanoeuvred all of them and succeeded in installing people who are loyal to him in the wards, council and state’s executives. The party’s structure in Nasarawa is under his control.The aspirants will now have to do his bidding to win his sympathy and support.

Governor Al-Makura had four years ago planted all the APC structures in Nasarawa state from the wards to state levels. Recently, at a stakeholders meeting in the Government House, Lafia, prior to the congresses to elect new executives of the party at all level, the governor reportedly directed that all executives of the party in the state be returned unopposed.

The governor used the exercise to affirm his grip on the structures of the party in the state.
For those aspiring to be governor on the platform of the APC, their fates now lie in the hands of Al-Makura.
In Keffi Local Government Area of the state, Arch Shehu Tukur, Salisu Maikasua and Aliyu Ahmed Wadada both governorships aspirants on the APC platform were schemed out by the forces of Senator Abdullahi Adamu and Governor Al-Makura as the aspirants could not install a single executive member of the party ahead of their ambitions to govern the state in
2019.

But in Akwanga Local Government Area, the state deputy governor, Silas Ali Agara, who is equally aspiring to succeed his principal took charge of the congress as all the party structures retained were his loyalists, whereas Engineer Abdullahi Sule completely lost out as he failed to get any of his loyalists elected into the executive.

In Nasarawa Eggon Local Government Area, the leading governorship candidate of the APC in the state, Barrister Danladi Envuluanza, had a poor outing at the congress. He did not secure a single executive of his party.
The same fate befell the state deputy speaker, Hon Godiya Akwashiki, who equally lost out in the party structure, while the north central zonal chairman of the APC, Hon. Zakari Idde, had his structures in the local government retained.

Also shut out during the congress was another leading governorship contender in the party and member of the House of Representatives representing Nasarawa/Toto federal constituency, Hon. Mohammed Jaâ€™afar who was sidelined in the political scheming in his Toto Local Government Area where he was unable to produce a single member of the executive.

Investigation by THISDAY Politics revealed that in view of the prevailing political structures in the state chapter of APC, only Al-Makura could determine the next APC governorship candidate in 2019 general election.

Under Al-Makura, APC in Nasarawa State has successfully outperformed the Peoples Democratic Party (PDP), the All Progressives Grand Alliance (APGA) and the Social Democratic Party (SDP).
However, as the governor begins the remaining year of his administration, he is in a dilemma over how best to handle the emergence of the partyâ€™s governorship flag bearer for the 2019 general election.

Indications that the party may not find it easy arriving at the choice of who to present as its governorship candidate in 2019 polls emerged late last year when Engineer Abdullahi Sule, the managing director of Dangote Sugar Refinery, led the Dangote Group to the state with the establishment of mouthwatering agro-allied industries.
Many view the move as a gesture that is likely to influence voters in Nasarawa to support his ambition to succeed Al-Makura in 2019.
Therefore, Al-Makura was said to be treading with caution when it comes to his support for the engineer as his successor in order not to receive a protest vote from the larger Nasarawa community that might end the reign of APC in Nasarawa State.

Also the coming into the governorship race of Mr Danladi Envuluanza, the immediate past secretary of Nigeria Judicial Council and a long time friend of the governor, as well as the state deputy governor, Silas Agara; who is equally on the governorâ€™s neck for support for the APC ticket and who has been 100 percent loyal to the governor and the traditional institutions in the state, is said to have put the governor in a state of confusion.

Sources claimed that these developments have altered certain permutations on ground and subsequently introduced a new dimensions into the ongoing search for a governorship candidate of the party, even though he (Al-Makura) has the entire political structure of the party in his hands.

Unfortunately for Jaâ€™afar, his cordial relationship with Governor Al-Makura has gone sour in recent time, therefore it is most likely the governor will withdraw his support from him. With the support of the governor withdrawn, it will be difficult for him to push his ambition through.

Political analysts in state believe Hon. Ahmed Aliyu Wadada will probably meet a brick wall in his quest of getting Al-Makura support to clinch the APC gubernatorial ticked as he was said not to be in the thick of things in his zone as he has gone under the shadows of Senator Abdullahi Adamu whom he has attacked viciously in the past.
Many also see Wadada as arrogant. Others cited his verbal attacks against past political leaders and even on the incumbent governor whom he was alleged to have described as a visionless governor lacking in policy direction.

The decision to contest the governorship seat by the assembly deputy speaker, Godiya Akwashiki, on the platform of the APC might have already been regarded by pessimists as the greatest joke of the century due to his indecisive tendencies on matters connected to state affairs. This may explain why Governor Al-Makura is not taking his candidature with any seriousness.

One new entrant into the Nasarawa State gubernatorial race on the platform of the APC that surprised many followers of politics in the state was that of Dauda Shuaibu Kigbu, a retired federal permanent secretary, who had worked in several federal ministries.

Kigbuâ€™s decision to join the race has again compounded
Governor Al-Makuraâ€™s decision as he continues to ruminate over who among the aspirant will be the right choice that would be accepted by the Nasarawa electorate.
As the governor intensifies his search for a sellable governorship candidate who will be very loyal to him and sustain his legacies, there are indications that he might have decided to spread his dragnet beyond those who have openly declared their intention to contest the APC governorship ticket ahead of 2019 election.

Some sources said that the governor was seriously considering his commissioner for education, Hon Aliyu
Tijjani, and or the permanent secretary in the state ministry of Local Government, Mr. Bala Sani, for the race. This, according to investigation, is because the governor does not want to offend Envuluanza, Sule and his deputy, Agara hence the need to look elsewhere for a neutral person.
Tijjani had earlier before now nursed the ambition of going to the House of Representatives in 2019, but with this alleged permutation by the governor, that ambition remains in the cooler.
For now, the talks about who will be the partyâ€™s flag bearer remain in the realm of mere speculations as the governor and his close associates are daily thinking on how to procure the best man for the job ahead.

Nevertheless, the threat to the partyâ€™s peace stems from alleged hidden plan by some powerful forces to introduce either the state commissioner for education, Ahmed Aliyu Tijjani, or the permanent secretary in the state ministry for Local Government, Mr. Bala Sani, in the last minute into the governorship race and impose
any of them on the party. But none of these two have publicly declared their interest in the 2019 governorship race.

The ease with which the retention of all the party structures sailed through without any objection clearly shows that any APC gubernatorial aspirant must get the governorâ€™s blessing to emerge the candidate of the party in Nasarawa state, and the development has rattled all the governorship aspirants under the APC.

The governorâ€™s action also introduced a new fear; the fear of the possibility of Governor Al-Makura imposing a candidate on the party.

With over 14 aspirants jostling for the APC’s ticket, the race for the 2019 Nasarawa State governorship is already generating tension within the camp of the ruling party. 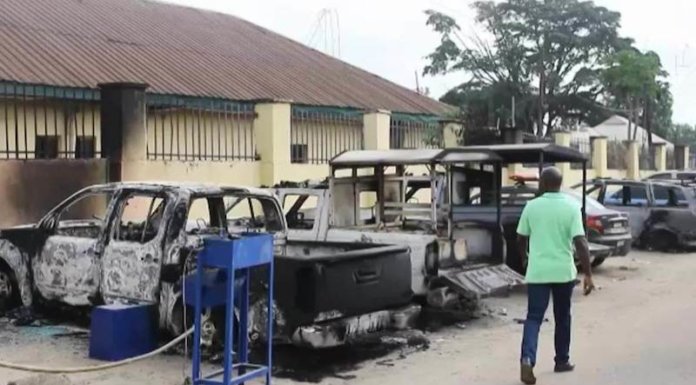