â€¢ No law bars me from contesting, minister replies

Barely two weeks to the All Progressives Congress (APC) governorship primary slated for May 5, a group known as, Concerned APC Members, has called on the party top hierarchy to disqualify former Governor Kayode Fayemi, over alleged indictment by the state government and refusal to resign as a minister.

The group maintained that the party stands the risk of implosion if allegation that the minister has bought Chief John Odigie-Oyegun â€“led National Working Committee over to spare him despite not resigning and being indicted for alleged financial profligacy by a judicial panel.

Fayemi and 29 others have procured nomination forms to contest the May 5 gubernatorial primary of the APC in Ekiti State.

The group warned the governor of Ondo State, Mr. Rotimi Akeredolu, against meddling in the internal affairs of APC in Ekiti, saying the party is ready to resist all his alleged plot to impose Fayemi via subterfuge in the primary.

Meanwhile, Fayemi had while declaring in Ado Ekiti recently, said his detractors were only chasing shadows by relying on â€˜frivolousâ€™ indictment by the outcome of the Justice Silas Oyewole judicial panel set up by Governor Ayodele Fayose.

Boasting that he was neither rattled nor wavered by the indictment and recommendation that he should not hold political positions for 10 years, Fayemi described the panelâ€™s white paper as not worth more than a â€œtissue paperâ€.

He said the Supreme court had adjudicated over several matters that only the court of law can bar anyone from contesting election, saying: â€œThey said Governor Fayose has indicted me in his white paper. This is just a mere tissue paper. But I have a red card for him in July 14 electionâ€, he stated.

Speaking in Ado Ekiti yesterday, the groupâ€™s Coordinator, Mr. Ife Olu-Olubusuyi, said: â€œWe are concerned and advise that the APC headquarters must adhere strictly to its own rules and disqualifies whoever has not met the minimum conditions for governorship as indicated by the constitution and guidelines.

â€œIt is by doing this that we can have a credible candidate and proceeds to win the general election. Prior to his formal declaration on April 14, the minister had been boasting and spreading news that presidency and NWC had picked him and will impose him as the candidate of the APC.

â€œEven after our National Chairman, Chief Oyegun visited Ekiti and denied any such plan of imposition and promised a free, fair and credible primary, the minister and his men continued to inform and spread news of his impending imposition by the presidency and powers that be, spearheaded by Ondo State governor.

â€œWe are also aware of the guidelines of the APC for qualification as an aspirant for governorship and there was a specific question as to whether someone has been indicted at home or abroad by a judicial panel or awaiting any criminal court charges.

â€œWe are also conscious of the specification regarding 30 days minimum condition for resignation from office before any election, which Fayemi has not met.

â€œThe governor argues that there were legal arguments that allow him to contest irrespective of infractions. If that is done, then the party would have inadvertently confirmed the assertion that they really have anointed candidate imposed by presidency on Ekiti Stateâ€, he said.

The group said it will challenge Fayemiâ€™s candidacy in court, if he eventually emerged as the flagbearer in spite of these open alleged constitutional breaches.

Fayemi, who descended heavily on his detractors, said: â€œI am already in court challenging this charade they called indictment and there are so many court judgement I can recall to support my being in government up to now with resigningâ€. 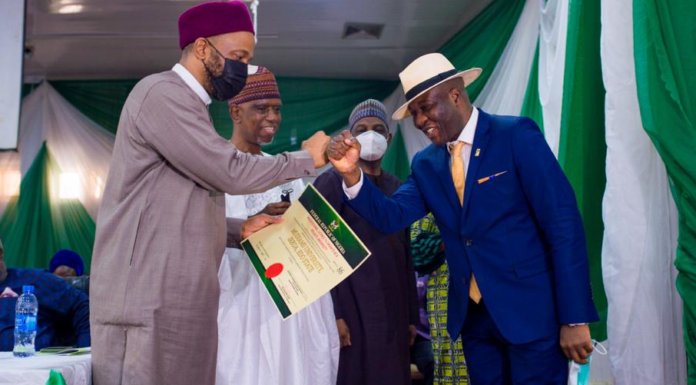