When the Peoples Democratic Party, {PDP} in Akwa Ibom state decided on Udom Emmanuel as its gubernatorial candidate for the 2015 election, it was not a leap in the dark decision.

The party was backing a career chartered accountant, who had been to the zenith of his career, spanning decades. In a very politically adept state, where every man sees himself as auditor of affairs of Government House, the emergence of the sedate former secretary to the state government Emmanuel, must have unsettled a few.

Many wondered then if he would be able to conceive the right vision and make it his mission to take the state to a higher level. But the Akwa Ibom PDP certainly knew the next level it wanted the state to move into by the governorship candidate it backed.

Governors, historically, were given the exercise of sovereign powers. They had huge responsibilities. The Romans gave the legal and administrative handling of provinces to governors. In later days, a governor is largely one who governs a constituent state of a federation. He is the leader of such a people. In choosing a highly successful chartered accountant to lead the state, the Akwa Ibom PDP knew the intrinsic worth of having such a professional as head of government.

Most modern chartered accountants are more of strategic business advisers/managers. They also deal with the regulatory and administrative side of businesses. They function as a counterbalance and fill in the gaps in major entrepreneurial endeavours of renown. Entrepreneurs are successful not just because they have ideas but also that they have quality accountants working behind the scenes. Ask Donald Trump. The exciting ideas of accountants do lead to great business success. Therefore to have a state government run by a business-minded professional accountant for wealth generation is not a bad idea.

Emmanuel took over the reins of governance just as the nation entered a recession. A recession is not a tea party. There is an impact on revenue. Economic activities decline significantly as revenue and corresponding spending are low. Basically, cash is scarce. Such a time takes someone with the financial training to navigate a state through to awakening economic stimulus activities and also meeting governmental obligations in a cash squeeze. On how the state was able to make progress during the recession, the governor said: â€˜â€™It has to do with attitude. In every situation, there is always an opportunity. Even in the period of recession, there are lots of opportunities. You must deliberately look at what are the game changers and then pursue those ones.â€™â€™ He has been very active in forward-thinking policies to meet the challenge of these times.

Emmanuel is the personification of what a democratic leader of a people should be. Not so much in playing to the gallery and demagoguery, he is the fresh calm face invigorating government as a business and employing ideas to generate wealth for his people. One of the key projects dear to his heart for his people, is the Ibom Deep Seaport. To drive this dream, rather than reward political allies, he choose to lead the implementation of this project, the pioneer director-general of the Nigerian Maritime Administrative and Safety Agency.

This deep seaport with an industrial city, is designed to be a transshipment hub in the West Africa sub-region. There are thousands of jobs to be created just in the construction phase of this gigantic project. This is the thinking of a chartered accountant governor. This thinking has attracted the attention of the federal government. When he was the Acting President, Prof. Yemi Osinbajo told the people of Akwa Ibom in March 2017 that the federal government had allocated N1 billion to assist the state in the development of the deep seaport.

He is as passionate in industrialization as in firing up small and medium scale enterprises. He has initiated and continued to support the Akwa Ibom Enterprise and Employment Scheme, AKEES, which provides employment opportunities for unemployed youths through empowering local businesses. This creates more jobs for the youths who otherwise could have taken to crimes. By helping youths to gain entrepreneurial skills, Emmanuel is laying a solid foundation for the development of Akwa Ibom State.

Very developmental minded, Emmanuel has continued with several projects inherited from his predecessor. One of such is the construction of a 3.6 kilometres x 60 metres wide taxi way at the Ibom International Airport. He is expecting the big planes.
A governor, apart from providing necessary infrastructure, being a good manager of resources and providing great ideas, has to be a democrat in heart. He must not only take the constitutional oath to uphold the rule of law, but his actions must be seen to be democratic, not of an autocrat.

One touchy area since the return to constitutional rule in Nigeria, has been the relationship between state governors and their houses of assembly. The exception seems to be the rule in some states as the constitutional division of powers between the executive and the legislature, is not there. Many governors relish dictating to their houses of assembly. In such cases, acrimony and conflict can not be ruled out. Examples abound where chief executives of states have orchestrated the removal of speakers of houses of assembly. Recall it was conflict over budgets and taxation that contributed to tensions between assemblies and governors in the pre-American revolution United States. Those conflicts not well managed, led to the revolution.

A democrat in government house will cultivate the legislature and ensure the independence of both arms of government while yet ensuring that the vision of the executive is not scuttled. No need to send hired thugs to invade the hallowed chambers of the house of assembly. One of Emmanuelâ€™s 12-point agenda is, â€˜â€™to uphold the tenets of democratic governance.â€™â€™

One area of evaluating a governor is in crisis management. How calm and capable he is during crisis. Navigating the ship of the state through the economic recession while still ensuring constant payment of salaries with other huge governmental obligations, is noteworthy. The state is not among those where workers commit suicide for lack of salaries.

Akwa Ibom state was in the news early in the life of his administration when federal security agents breached the sanctity of the state’s government house. How he reacted from a position of higher morality to that crisis boosted his standing in the eyes of the public. Under his watch, Akwa Ibom state in the heart of the Niger Delta, has been kept largely free from youth restiveness and consequent destruction of the nationâ€™s economic assets.
Another area to evaluate a governor is his personal attributes. A governor needs be a gentleman, free from thuggery and overtly promoting corruption. Integrity counts.

During his inauguration in May 2015, quoting Jesse Jackson, the governor said, â€˜â€™We are tired of sailing our little boat inside the harbour. We want to go out where the big ships float, out on the deep where the great ones are. And should our frail craft prove too light for waves that sweep those billows over, we would rather go down in the stirring fight than drown to death at the sheltered shore.â€™â€™

Under his watch, Akwa Ibom state in the heart of the Niger Delta, has been kept largely free from youth restiveness and consequent destruction of the nationâ€™s economic assets 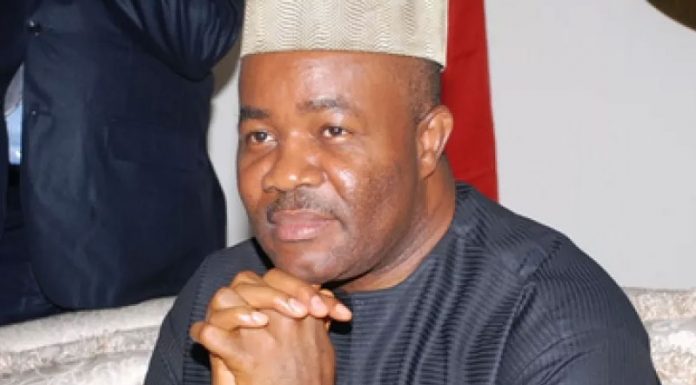