With an estimated 1.3 billion people living in extreme poverty across the globe, the quest for food security as enshrined in the sustainable development goals is gaining global prominence. Recently, the United Nations Sustainable Development Goals Fund (UN SDG-F), Sahara Group, Kaduna State Government and Roca Brothers (foremost chefs in the world) unveiled the ‘Food Africa’ project in Kaduna to promote food security. In this interview with Chineme Okafor, the Executive Director and Co-founder, Sahara Group, Mr. Tonye Cole, spoke on the importance of the project which is ultimately expected to enhance inclusive growth in the African food industry. Excerpts

How much of a threat would you say poverty represents to communities and nations across the globe?

Poverty is a serious threat to communities and nations globally. Apart from the fact that people die daily from starvation due to poverty, the constantly increasing gap between the rich and the poor has accounted for further strife, violence and conflicts in many regions of the world. Some world bank reports have stated that nearly half of the world’s population – more than 3 billion people live on less than $2.50 a day, more than 1.3 billion live in extreme poverty – less than $1.25 a day and 1 billion children worldwide are living in poverty. According to UNICEF, 22,000 children die each day due to poverty. The statistics are very disheartening hence the need to develop sustainable solutions required to reduce the threat to humanity.

How is Sahara involved in attempts to cutback the incidences of poverty?

Through multiple partnerships with public and private sector organisations, Sahara has been involved in the implementation of several economic empowerment programmes within and beyond our locations across the globe. Most of the projects involved provision of platforms for skill acquisition for indigent and disadvantaged beneficiaries to promote inclusion and socio-economic growth. The recently launched ‘Food Africa’ project is another platform we believe will enhance the campaign against poverty on a massive scale given the involvement of local, regional and global partners.

How did the Food Africa project emerge and what is the focus of the project?

The Food Africa project, a very first of its kind is the product of a partnership between Sahara Group, the United Nations Sustainable Development Goals- Fund (SDG-F) and the Kaduna State Government aimed at empowering the people of Kaduna State and alleviating poverty through food security.

The project was birthed after the SDG-F looked to the private sector as a possible contributor to the success of sustainable goals particularly because they had observed in multiple countries across the world, many private companies had carried out very successful and thriving CSR projects with little or no involvement of the host governments.

Who are the partners involved in the project and their inputs?

The United Nations Sustainable Development Goal Fund (SDG-F), Sahara Group, UN specialized agencies, Kaduna State Government and Roca Brothers of Spain who were recently given the award of the best restaurant in the world.

The SDG Fund and Sahara Group will be responsible for project design and will together provide the bulk of the co-financing, mobilise matching fund contributions and oversee the preparation of the work plan in agreement with all partners. They will jointly chair the biannual trustees committee, assume overall oversight of the project implementation, provide guidance to the project management office and oversee the appointment and development of the capacities of the processing facility management.

UN specialised agencies will assume responsibility for technical assistance in their core areas of expertise and implementing those activities agreed upon in the work plan, including the feasibility, baseline and market studies, training of farmers, cooperatives and farmer-based organisations, occupational and safety and health.

The Roca Brothers will contribute to overall technical oversight to the project. They provide their technical expertise, including the sharing of best practices in resource efficiency, recycling and recovering of waste as secondary resources to help optimise the operations of the processing facility. They will play a key role in establishing the Centre of Excellence, through “training-of-trainers” modality to build the capacity of a team of local trainers.

The Rocas’ team will also contribute to the communications and advocacy campaign. Kaduna State Government will provide the land upon which the facility will be constructed and other arable land within the identified local government areas in addition to access to utilities and all-year round armed security for the facility.

The state government will collaborate with other state-level stakeholders to improve local infrastructure and including rural roads to allow access to the facility and farmland and will share relevant policy information, databases, etc. at its disposal. They would also play a vital role in assisting in the identification of potential farmers that would take part in the out-grower’s scheme.

You recently unveiled your extrapreneurship framework for corporate responsibility, how does the Food Africa project key into this?

The extrapreneurship is a cross sectoral collaboration that identifies creates and connects young people with business interests in emerging markets through skills training, mentoring and access to a network of committed stakeholders. In the same vein, the project provides a platform for partnership between the various stakeholders to offer trainings and mentoring services to rural farmers in Kaduna in order to help them develop and improve their farming techniques and methods to meet global standards, providing a platform to learn and understand the business and commercial aspect of agriculture value chain as well as also providing access to a network of committed product off takers.

How will sustainability be enshrined into the project?

Considering the fact that Sahara has over the years nurtured businesses from incubation to maturity, we have along with our partners developed and designed an appropriate framework during the project conceptualisation to ensure ownership of project by beneficiaries hence guarantying sustainability. The project beneficiaries will be empowered with the right skills, training, resources and network connections that will guaranty the sustainability of the project.

Are there plans to replicate this project elsewhere?

Upon successful implementation of the project in Kaduna State, we are confident that we will be in the position to replicate the project in other locations within Nigeria and ultimately in other African nations. We are gradually developing the required network to make this possible working in concert with the UNSDGF and other UN agencies in Africa. From all indication, we expect that the Food Africa project would ultimately become a model that can be replicated across the globe.

What then does its formal launch in Kaduna mean for Nigeria?

Very symbolic. The enthusiasm expressed by the local farmers in Kaduna was palpable. They are eager to learn new ways of improving their work and collaborating to achieve the big picture of sustainable productivity for the benefit of all.

I must commend the Kaduna State Government ably led by His Excellency, Mallam Nasir El-Rufai, for providing the foundation and support for the commencement of the project. In fact, prior to the formal launch we had been working closely with the relevant ministries, agencies and organisations in the state. Everyone is excited about the expected outcomes from Food Africa and I can tell you that Sahara and other partners remain committed to ensuring that we record a resounding success that can be replicated elsewhere.

In addition, considering Nigeria’s position on the African continent, it will afford us the opportunity to equally lead efforts that would stimulate stronger commitment and enthusiasm in other parts of the continent towards the attainment of the critical development action.

Are you able to disclose other projects Sahara is implementing in its extrapreneurship platform?

The concept is gradually unfolding and we are currently collaborating with Kunle Afolayan, an award winning film maker on a project tagged ‘Grooming film Extrapreneurs with Kunle Afolayan’. The project was designed to provide a platform to task youths in Nigeria to channel their creativity and innovation in film making to celebrate entrepreneurship in Nigeria using the theme -My Nigeria, My Platform…Seeing Nigeria through an entrepreneur’s eyes.

Interested budding film talents are expected to send in 15-minute documentaries that highlight the story of Nigerian entrepreneurs, with a focus on how their activities are providing sustainable solutions, creating employment and promoting socio-economic development in the nation. All submitted documentaries will be screened by one of Africa’s best film makers, Kunle Afolayan and the overall winner will undergo a mentorship programme with Kunle for six months.

Sahara Foundation is also in partnership with ENACTUS Nigeria to create a platform that will identify and reward business ventures while also improving the efficiency of entrepreneurs to ensure growth and sustainability.

editor - October 24, 2020 3:25 am
4
PENDULUM BY DELE MOMODU Fellow Nigerians, it is difficult to imagine the amount of mayhem that visited Lagos this week. Let me just put it... 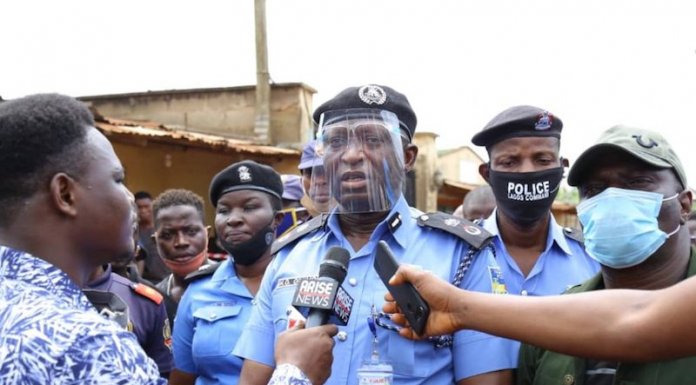 ‘Transition From SARS to SWAT was too Rash, too Brash and too Hasty’