Eromosele Abiodun
ENL Consortium, operator of Terminals C and D of the Lagos Port Complex, Apapa, has renounced dockworkers who on Monday staged a protest at the Nigerian Ports Authority (NPA) Headquarters in Marina, Lagos.

Legal Adviser of ENL Consortium, Uzamot Boye in a statement stressed that at the time of the protest, its staff were all at their duty posts inside the port carrying out their various tasks.

“It is malicious to say our dockworkers protested. It is not true. All our workers were at work. Those who protested were those who have since been disengaged from the port and who have been paid their terminal benefits. You can verify this from the Maritime Workers Union of Nigeria (MWUN). All our workers were at their duty post. They are happy on their jobs. They are all very busy,” Boye said.

He said MWUN would have issued notice and been in the forefront of the protest if the protesters were genuine port workers.

“It would be recalled that the same set of people had carried out similar protest in the past at the Nigerian Maritime Administration and Safety Agency (NIMASA) headquarters in Apapa but were told that they had been disengaged from service and due allowance paid to them. ENL Consortium is a people-focused organisation. We empower our people and enable them to be the best. Our Executive Vice Chairman/CEO places the welfare of workers above every other consideration,” he said.

On his part, the President, Dockworkers Branch of the Maritime Workers Union of Nigeria (MWUN), Comrade Adewale Adeyanju confirmed that the protesting dockworkers have been disengaged from the port and paid their entitlements as stipulated under the National Joint Industrial Council (NJIC) agreement, warning against the return of thuggery at the port.

Adeyanju said issues affecting maritime labour must be discussed at the table with employers, rather than the resort to the arm-twisting tactics of the past.

He said the payment of gratuity to disengaged dockworkers happened for the first time in the history of the maritime industry in the country this yea, a development which highlights a big plus for both the union and terminal operators.

“For the past 30 to 40 years, we have not had anything like terminal benefit for dockworkers and it is under our administration that we are getting what a responsible dockworker ought to get. It is a starting point in the industry,” Adeyanju said.

According to him, the dockworkers that elected to leave the service of their employers were misguided on what they were entitled to collect as retirement benefits.
He added: “This has never happened before and I think someone is inciting these dockworkers by saying they are entitled to thirty three thousand naira a month plus the amount of tonnage they stevedore. But you this is not correct.

There is a tonnage operation and there is time-related wages, which stands for permanent employment. And I think there is a mix up somewhere and I have addressed all of them to let them know that we have permanent staff and people that are on tonnage. You are paid on a daily basis on the amount of tonnage that you stevedore.” 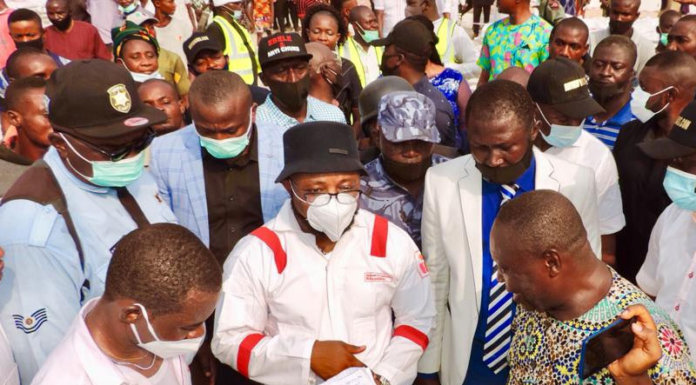